Set in the summer of 1969, in a fictional neighborhood of Massapequa Park, NY, Neil Armstrong is My Uncle and Other Lies Muscle Man McGinty Told Me is the story of young Tamara Ann Simpson, Muscle Man McGinty, the "squirrelly runt, ... lying snake, and ... pitiful excuse for a ten-year-old," and all the other colorful inhabitants of Ramble Street.


It's not only Muscle's Man's tall tales that have Tammy in a snit. Her best friend, Kebsie Grobsers, has moved away without a trace, and Kebsie's room in Mrs. Kutchner's foster home is being occupied by none other than that wormy liar, Douglas, "Muscle Man" McGinty! Tamara can't figure out why the other neighborhood kids are cutting Muscle Man so much slack! Does anyone really believe that he's training for the 1972 Munich Olympics? That Neil Armstrong is his uncle?!

A rough-and-tumble girl who would rather play kickball than read, Tammy is no stranger to trouble and is grounded as often as not. Her mother, Shirley, is obsessed with soap operas,


...a bunch of ladies are sitting in a hospital room, telling the
one in the bed that no one will notice her injury, even though
she is wrapped up like a mummy with bandages and gauze.

"Why do you think they're telling her that?" asks Shirley.

"Because they're the stupidest group of ladies
to walk the planet?"

It's probably wrong, but it's my best guess.

Her dad, Marshall, is obsessed with how early he has to get up to catch the train to work, working "for the man," as Tammy's college-aged brother puts it.

The Apollo 11 moon landing, the Vietnam War, the Miracle Mets, and Woodstock provide the backdrop for a story that is ultimately about Tammy, who finally learns to see past herself.

Nan Marino succeeds in creating a microcosm of the turbulent summer of 1969 within the confines of Ramble Street and its inhabitants.

Neil Armstrong is My Uncle is at times funny, at times touching, and always heartfelt. Kids will relate to Muscle Man's unflappable optimism and Tammy's candor (she can be a bit of a liar herself!)

"What are you doing up there?"

...I'm suddenly grateful that my parents are stair shouters
and not face yellers like Big Danny's mom and dad. For now,
my garage roof secret is safe.

Parents may enjoy reliving their own summer of '69.

In full disclosure, I must admit that I work in the same library system as the author; however, I haven't had the pleasure of meeting her yet.

Bo the Brave - a review

Bo the Brave By Beth Woollvin Peachtree , 2020 Bo the Brave is a delightful tale of adventure and derring-do with a strong female p... 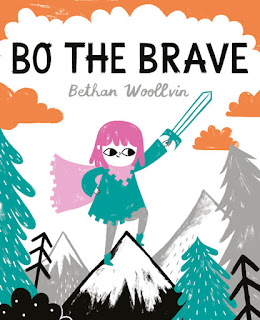