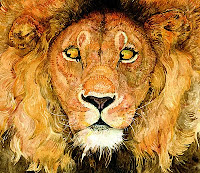 Our computers were down at work today…a great time to explore the contents of my new arrivals bag!

From the picture book collection:
Pinkney, Jerry. 2009. The Lion and the Mouse. New York: Little Brown.

Jerry Pinkney’s The Lion and the Mouse is a (nearly) wordless re-telling of Aesop’s fable of the same name. The story unfolds clearly and simply. The only “words” are the sounds of the Serengeti plain – the screech of an owl, the squeak of the mouse, the putt-putt of the hunter’s truck, the roar of the trapped lion. The pencil, watercolor, and colored pencil illustrations on paper, are simply stunning, conveying both the vastness and majesty of the African Serengeti and the myriad emotions of the lion and the mouse as they encounter each other by chance and again by purpose. The soft butter-yellow pages blend artfully with the earthy hues of Africa’s birds, plants, insects and wildlife. A beautiful book!
Redmond, E.S. 2009. Felicity Floo Visits the Zoo. Somerville, MA: Candlewick. 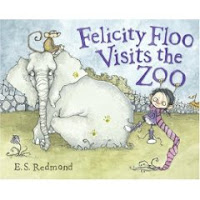 Felicity Floo has a cold and she’s off to visit the zoo – without a tissue. Trouble ensues as little Felicity spreads her germs,

“All of the animals down at the zoo
Are snuffling and snorting and sneezing ACHOO.
The lions won’t roar, and the tigers just mew.”

The double-spread illustrations are delightfully dreary. The disheveled Felicity sports a red nose, baggy eyes and a slimy, shiny, green hand print which she plasters throughout the zoo. Emus, elephants, flamingos and more, eye her with wide-eyed dismay.

Of course, one could argue that the idea of a zoo visitor touching the animals and spreading germs is a poor and erroneous example for little listeners; however, this is an engaging, rhyming story that spreads, not just germs, but a timely reminder to use a tissue and keep one’s slimy, green germs to oneself! A fun introduction to hand-washing and flu prevention.