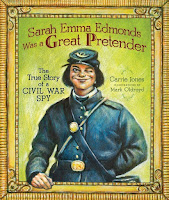 Author, Carrie Jones, probably best known for her Need series, is not be the first author who comes to  mind when thinking of picture book biographies, however, in Sarah Emma Edmonds, she has clearly found a subject that sparks her interest.
Sarah Emma Edmonds was born in Canada to a cruel father who wished she were a boy.  Unhappy and unable to please him, she eventually fled to the United States and began a new life on her own. She began by selling Bibles, door-to-door, and soon discovered that she sold more and was more readily accepted when dressed as a man. When her adopted country began recruiting soldiers for the Union Army, Sarah joined up, disguised as a man, and giving the name of Frank Thompson.  This would be remarkable enough, but Sarah Emma Edmonds went on to become a successful Union spy. She darkened her skin with silver nitrate and posed as a Southern slave, stealing information on Southern positions and fortifications.  Two months later, she returned to the Confederacy.

Jones does a fine job of distilling the life of this complex woman into a hero story that can be easily understood by younger readers.  The basics of the war are explained, but the war is not the story here.  Sarah Emma Edmonds is the story; children should find her bravery and cunning fascinating.

Although the Author's Note reveals that Sarah Emma Edmonds later revealed her Civil War exploits in a memoir and was belatedly accepted by her fellow soldiers (even the federal government eventually granted her a pension), the book ends with the following,


She pretended that she was never Frank Thompson, never a spy, never rode a horse named Rebel, and never stole Confederate secrets. Sarah Emma Edmonds was a fantastic pretender.  No one had a clue.

Hopefully, readers will persevere through the fine print author's note and discover the successful resolution of Sarah Emma Edmonds' dual life. Leaving the reader with the impression that her valor and determination went unappreciated is a bit disheartening. Overall, though, this is an inspiring story of a young woman who took a bad beginning and turned it into a grand and honorable adventure.

Because I do not own a Color Nook, I will again refrain from commenting the double-spread, painted illustrations by Mark Oldroyd.  In the future, I will be sure not to request picture book review copies in digital format.  My apologies to Mr. Oldroyd.