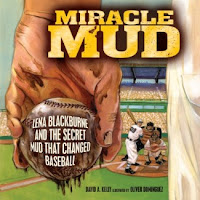 In fact, as readers will learn in Miracle Mud,


And it comes from South Jersey, but Miracle Mud won't tell you from where - that's a secret!

Oliver Dominguez' nostalgic, double-spread, painted illustrations are the perfect complement to this short and engaging biography of Lena Blackburne (1886-1968) and his famous mud. You may view eleven of the book's paintings at Oliver Dominguez' website.  The front and rear end papers are the best - clean baseballs up front, muddy ones in the back!

An Author's Note and Lena Blackburne's official stats round out this great introduction to Lena Blackburne. He never made it to the Hall of Fame, but his mud did! A great choice for baseball fans of all ages.

Don't believe it?  Want to learn more?
Check out:


It's Nonfiction Monday.  Today's roundup of nonfiction posts can be found at Playing by the book.