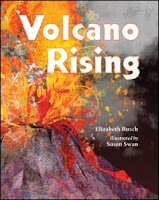 When kids think of volcanoes, they likely think of the awesome destructive power of  famous volcanoes past and present -  Mount Vesuvius, Krakatoa, Mount St. Helens, Mount Etna, Kilauea, and Mauna Loa.  However, if you've ever read James Michener's epic novel, Hawaii, or traveled to Hawaii, you know of the incredible creative power of volcanoes.  Each of the Hawaiian islands was created by a volcano, its molten lava rising, spreading, cooling, hardening, and eventually creating the Hawaiian island chain with its famous black sand beaches.

Volcano Rising focuses on this unique and often unheralded aspect of volcanoes, giving examples of various ways in which volcanoes may have "creative eruptions." A particularly helpful aspect of the book is its duality as a read-aloud for younger children and a more detailed text for independent readers.  In white or black text against double-spread illustrations, large text is aimed at a read-aloud audience, while smaller text delves deeper,

For more than twenty-five years, shield volcano Kilaueau (kee-lau-WAY-ah) on the Big Island of Hawaii has been in a state of creative eruption. Shield volcanoes have lots of vents, allowing runny lava to leak from cracks to form broad mounds that are shaped like shields.

Kilaueau's constant eruption has added more than 500 acres (202 hectares) to the island--that's more than 314 soccer fields! No one works or plays soccer on this new acreage yet. But they will. After all, where would the people of Hawaii live if not for the creative eruptions that helped build all their islands?

Often an artistically illustrated nonfiction book lacks the punch of a photographic one, but not in Volcano Rising.  Because the focus of the book is the process rather than the explosion, the colorfully inventive collage art of Susan Swan is perfectly suited to the text, helping to define the concept of creative eruptions in an art form created


by manipulating found objects, hand-painted papers and scans of objects and textures in Adobe Photoshop to create new patterns,adding digital paintings; and then collaging the two together

The effect is vibrant and stunning.

Note: In 1980, I experienced a volcano in a very small way.  In the aftermath of the Mount Saint Helens eruption, volcanic ash rained down.  Workers were hosing the scratchy dust off vehicles as they traveled through town.  Pedestrians were wearing surgical masks to avoid breathing the ash and dust.  I scurried from bus to train as I made my way out of Portland, Oregon - more than 70 miles from the site of the explosion.  Nature is truly impressive and awesome and constantly reminds us that we are much smaller than we think.

Nonfiction Monday is here today!
Please add your post to the form and check back later to see the roundup of today's contributions.


Please keep in mind that I work all day,
so all of the posts may not be updated until much later in the evening.