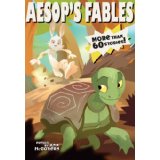 First published in 1963, Ann McGovern's Aesop's Fables is a collection of over 60 of Aesop's classic fables.  Readers will recognize some, like "The Boy Who Cried Wolf" and the "Lion and the Mouse," but others will likely be new to the reader.  Some may be a familiar surprise.  Most will know the phrase, "one good turn deserves another," but not many will know that it came from Aesop's fable of "The Ant and the Dove."

There are several things to like about McGovern's telling of Aesop's fables.  Because fables were originally an oral tradition, these are short and succinct stories.  None of these stories take up more than two pages in this small (5 1/4 x 7 5/8 inches) book; many are only a half page. Their brevity offers up many possibilities.  They can told quickly - as part of a library storytime, as short bedtime stories, or even as an introduction to a school lesson on animal behavior.  Though fables were based on the deeds and misdeeds of men, the characteristics assigned to each animal generally bear some resemblance to the actual animal's abilities.  Fables also invite imagination and embellishment.  They're perfect for creating short plays, puppet shows, and flannelboard stories.

As Aesop and McGovern remind us in "The Man and the Lion,"

How a story ends often depends on the storyteller.

Here's a copy of the original cover from the 1963 Scholastic Apple Classics version of Ann McGovern's book.  Amazon has a "look inside" feature for this book. In comparing the two, it appears that in addition to new cover art, the new version, has simplified the language.  For example, the moral in "The Fox and the Grapes" has been changed from


Which proves, of course, that it is easy to despise what you know you cannot possess,


It is easy to speak badly about what you cannot have.


(Italics and bold sections are as they appear in the books)

These are subtle differences, but should make the fables accessible to a younger audience.  In fact, the target audience has been changed from Grades 4-6, to Grades 2-5.  My copy is an Uncorrected Proof, but it appears that the interior artwork will remain unchanged.

Aesop's Fables will be available in hardcover, paperback and e-book versions in September, 2013 - just in time for school.


Be sure to visit Abby the Librarian to see all of today's Nonfiction Monday posts!

For those of you who are "non-librarian" folks, you may be wondering why I'm featuring fables on Nonfiction Monday.  Classic fables and folktales are found in the library with the Dewey Decimal Classification of 398 or Folklore, and more specifically, 398.2. Both are sub-classifications of the broader category of Customs, Etiquette, and Folklore.  "Fractured" folk and fairy tales, or re-tellings that change the setting and/or characters, are often shelved with fiction.

I have no connection with Etsy, other than the fact that I love checking out the great offerings there!