(My review of Steve Sheinkin's, Bomb, as it appeared in the July 2013 edition of School Library Journal) 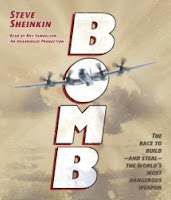 
Sheinkin’s stellar nonfiction account (Flash Point, 2012) captures the science, technology, logistics, and politics of the race to build the first atomic bomb. The book gives listeners a holistic perspective, highlighting the fact that the story of the bomb, while a technological miracle of the time, is at its core, an intricate tale of daring individuals whose actions affected families, friends, communities, and nations. The story begins at the end, with the capture of American spy Harry Gold in Philadelphia. From Gold’s seizure, Sheinken takes a retrospective look at events from the discovery of nuclear fusion to the deployment and the aftermath of the uranium and plutonium bombs in Hiroshima and Nagasaki, Japan. Gold, a chemist, in his role as Communist sympathizer and Soviet courier, is the thread that weaves this fascinating book together as it follows the trail of scientists, Nazi resisters, Soviet and American spies, workers, military commanders, and political leaders across the globe. The author’s narrative is as gripping as that of nonfiction masters such as Jim Murphy and Russell Freedman. Roy Samuelson’s clear diction and measured delivery complements the subject matter, offering students the opportunity to absorb sometimes complex material without pause. This award-winning, meticulously sourced book deserves a spot in every library.


Listen to an audio excerpt from Bomb: The Race to Build - and Steal - the World's Most Dangerous Weapon, here.

Bomb is a National Book Award Finalist, and the recipient of the Newbery Honor, Sibert Medal, and YALSA Award.


Today's Nonfiction Monday roundup is at Wrapped in Foil,
where "finding a great children's book is like unwrapping a perfect sweet."