The Tree Lady - a review


Hopkins, H. Joseph. 2013. The Tree Lady: The True Story of How One Tree-Loving Woman Changed a City Forever. Ill. by Jill McElmurry. 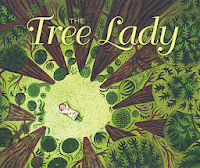 From her school, Kate could see City Park in the hills above town.  It was called a park, but it didn't look like one.  It was where people grazed cattle and dumped garbage.

Most San Diegans didn't think trees could ever grow there.


With a recurring theme of "but Kate did," The Tree Lady recounts how Kate Sessions (1857-1940), defied all expectations by enjoying the outdoors as a young girl, obtaining a science degree from a prestigious university (unheard of for a woman in 1881!), and resolutely turning a barren, desert park into a green and leafy oasis that remains a jewel of the City of San Diego to this day.  McElmurry's painted, double-spread illustrations get the colors just right and project an "old-timey" feeling that kids will immediately recognize. Katherine Olivia Sessions' story, The Tree Lady, is an inspiring and informative book for anyone, but should most definitely be in every elementary school in San Diego, where she is known as "The Mother of Balboa Park," the name given to City Park in 1915.

Having lived for many years in the Northern reaches of San Diego County, I was thrilled to learn the history behind one of my favorite places. Balboa Park is the larges urban park in North America, containing more than 1200 acres of land. By comparison, Central Park in New York consists of about 778 acres.

In addition to Kate Sessions' trees, the park houses the world famous San Diego Zoo, the San Diego Museum of Art and more than ten other museums, the Old Globe theater, the Starlight Bowl, more than fifteen individual gardens, restaurants, trails, a Spanish village, a United Nations Building, a carousel (circa 1910), and more.  Located in the heart of town, it is open and accessible to all, with many roads running through it.  No trip to San Diego is complete without a visit to Balboa Park.  I'm wistful just thinking of it.

Food for thought:
Kate Sessions imported trees and plants from around the globe that she knew would prosper in San Diego's unique climate.  Given the current focus on sustainability and native plantings, I wonder if such a project would or could ever be undertaken today. This would be an interesting topic to explore in the higher grades.


Nonfiction Monday is hosted today by Perogies & Gyoza.  All of today's nonfiction posts will be featured there.

For those of us in the U.S. (our meme host today is in Japan), enjoy your Columbus Day!  Hopefully, for you, it is a holiday from work.