A Clatter of Jars - an audiobook review 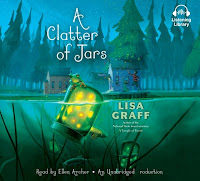 A Clatter of Jars by Lisa Graff
Read by Ellen Archer
2016, Listening Library

A Clatter of Jars is Lisa Graff's follow up to 2013's, A Tangle of Knots.  I reviewed A Tangle of Knots in 2013, and declared, "If you read no other middle grade fiction book this year, you will have made a good choice." The magic doesn't wear off in A Clatter of Jars, a deftly woven, magical realism story set in the same world as the preceding book, where many people possess Talents - from the mundane (ability to understand frogs) to the powerful (telekinesis).  I particularly enjoyed this story because it features a boy who we may assume has some sort of spectrum disorder, and it has a subtle Lord of the Rings reference.

I often tell kids at the library that it's OK to start with a second book in a series if the first book is unavailable. (I don't like to see them go home empty-handed!)  Most authors do a fine job of catching the reader up on prior events.  However, because of the rich details of the world Lisa Graff has created, A Clatter of Jars is best read after A Tangle of Knots.


An audio excerpt from A Clatter of Jars and my review for AudioFile Magazine may be found here. [http://www.audiofilemagazine.com/reviews/read/114587/a-clatter-of-jars-by-lisa-graff/]
- July 14, 2016