The Queen of Frogs - a review

The Queen of Frogs 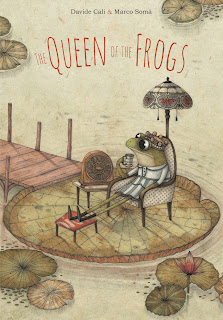 by Davide Cali with illustrations by Marco Soma
Eerdmans Books for Young Readers, 2017


If you have seen the popular South African movie, The Gods Must Be Crazy (1980, 20th Century Fox), then you will understand the premise of this delightfully illustrated cautionary tale of a colony of frogs who suddenly discover a crown. If you have not, I will suggest that queen in question has the desire and ambition of "Yertle the Turtle" (from Yertle the Turtle and Other Stories) and the clueless bravado of the infamous emperor in "The Emperor's New Clothes." Turnabout is fair play is exhibited in the book's humorous ending with a twist.

The illustrations appear to be a combination of pencil sketches painted with the muted earth tones of a frog bog. The anthropomorphic frogs cavort with great expression. Humorous details include frogs fishing with spools of thread for reels and a Venus Flytraps as bait. The frogs fish up, of course, as the target catch are flies! A bottle cap can also be spotted as the official seal on the the royal spokesman's podium.

The Queen of Frogs was first published in Portugal. My copy was courtesy of LibraryThing's Early Reviewers Program. I highly recommend it as a read-aloud for older listeners or a read alone for elementary school students. 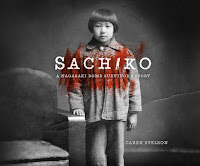 The survivors of the Nagasaki and Hiroshima bombings are known as "hibakusha" in Japan. As with all combatants and victims of WWII, their numbers are dwindling; it is important for their stories to be told.  Sachiko shared her personal story and that of her family with author Caren Stelson.  Despite the horrific circumstances of the bombing, and a lifetime of related hardship, Sachiko remains amazingly positive.  Her story is compelling and Sachiko: A Nagasaki Bomb Survivor's Story contains the historical information that young people may need to put her story in context.  I highly recommend it.

I reviewed Sachiko for AudioFile Magazine.  You can read my entire review here: [http://www.nationalbook.org/nba2016_ypl_stelson_sachiko.html#]

Sachiko was on the National Book Award Longlist for Young People's Literature,
and has garnered numerous other awards and accolades.
- January 20, 2017 No comments:

I Dissent - a review 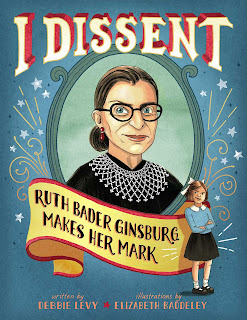 I Dissent: Ruth Bader Ginsburg Makes Her Mark
by Debbie Levy with illustrations by Elizabeth Baddely
Simon and Schuster, 2016

"Disagreeable? No." "Determined? YES." Whether objecting, dissenting, resisting, or disapproving, Ruth Bader Ginsburg has always done it with passion, with flair, and with conviction. This is her story, from childhood to the present. She has spent a lifetime fighting for the rights of women and minorities - beginning with her refusal to write with her right hand in grade school(she has always been left-handed), and continuing today with her Supreme Court decisions in favor of equal opportunities for women and minorities. The story is compelling; the illustrations have a cartoon-like quality, but are detailed and emotive.

There should be no dissent that I DISSENT: RUTH BADER GINSBURG MAKES HER MARK is a powerful introduction to a determined, successful, and inspiring woman.

I Dissent is a 2017 winner of the Sydney Taylor Book Award !
See the entire list of winners and honor books at the Association of Jewish Libraries website.
- January 12, 2017 No comments:

Mouse and Hippo - a review 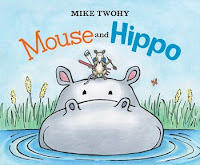 
How does a mouse view a hippo? How does a hippo view a mouse? And more importantly, can they be friends? Mouse and Hippo is an entertaining commentary on artistic perspective, but at heart, it's a comical story of friendship.

On a shelf near you beginning in February, 2017.

My complete review of Mouse and Hippo is in the January, 2017 edition of School Library Journal. 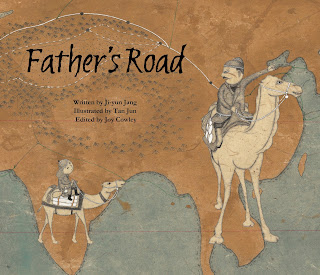 
Young Wong Chung is old enough to take part in his father's caravan from Chang'an (Xi'an) to Constantinople (Istanbul). He heeds his kindly father's advice and pays attention to everything he sees along the way as they travel the Silk Road from east to West.

We arrived at a place called Turpan where I could smell a sweet aroma. "That's the smell of grapes," said Father.

"See that white mountain over there? The ice from Tian Shan melts into the soil, and these delicious grapes grow." Father traded some silk for a bunch of grapes that tasted sweet as honey.

I gave two grapes to my camel. He liked them too.


Illustrator Tan Jung creates delicate ink drawings on paper that is flecked and textured to mimic sand. Its color also serves to represent the skin tone of the travelers and the coats of their many camels. Only the silks and featured geographical or commercial highlights are rendered in colors outside a muted palette of tans and grays.  Wong Chung, however, is readily discernible from the rest of the caravan by the pompom atop his cloth hat and his simple, yet endearing facial expressions.


Front and endpapers combine to create a map of the ancient Silk Road.
Back matter contains the following sections:

On sale 1/30/17.
My Advance Review Copy of Father's Road was provided by LibraryThing Early Reviewers program.