Alpha: Abidjan to Paris - a review 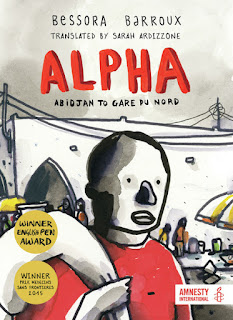 As you if you read my blog often, you know that I occasionally post adult books in addition to children's literature.  This is a powerful graphic novel that is also suitable for young adults, and I think it deserves attention.

Alpha: Abidjan to Paris is a tragic, graphic novel account of one man's attempt to flee a life of misery in Côte d'Ivoire and follow his wife and child to Paris. After numerous attempts to depart legally, Alpha discovers that the process to obtain a visa is corrupt and impossible for an impoverished man. He researches his options carefully and strikes out with a group of other would-be emigrants. Although he knows the trip will be dangerous, he is nevertheless hopeful that he will be reunited with his family and his relatives in France. He fancies himself an "adventurer." His first-person account of his "adventures" devolves into a living nightmare as the journey drags on with a constantly changing group of companions. The prose is simple, and the story is told without embellishment—there is no need for embellishment; the facts are gruesome enough,

"Very quickly, I learn to avoid the barricades. We stop a lot. Abebi is vomiting froth. She has no bile left. She's spitting bubbles of saliva. We've been on the road for nine hours, and we still haven't covered a hundred miles. Darkness falls. Perhaps Abebi will feel better tomorrow. Augustine sucks his fingers in silence. It's a cold night. We sleep huddled together, forming a sort of human radiator. We can't even make a fire—the smoke would betray us." 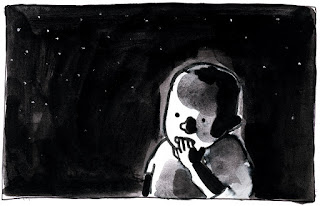 The illustrations—one or two panels per page, are also spare—mostly shades of black and greys with an occasional splash of color—Alpha's red shirt, the striped soccer jersey of an emigrant hoping to land in Spain and play for Barcelona, a flowered dress. The illustrations set a mood of haste and simplicity, appearing to be marker sketches - almost as if they could have been made on the journey.

An epilogue provides the outcome of the trip from Abidjan to Paris. It will be difficult to look upon the plight of any refugees without reflecting on Alpha's journey. This is a short and powerful, award-winning graphic novel.


My copy of Alpha was provided by LibraryThing Early Reviewers.
- April 18, 2018

Email ThisBlogThis!Share to TwitterShare to FacebookShare to Pinterest
Labels: adult, Africa, based on a true story, graphic novel, immigrants, immigration, translated, YA