Voyages in the Underworld of Orpheus Black
By Marcus Sedgwick and Julian Sedgwick
Illustrated by Alexis Deacon
Walker Books, 2019 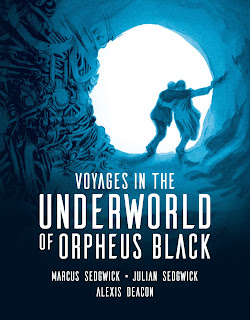 Voyages in the Underworld of Orpheus Black is a book that defies categorization, and is one of the most unique and affecting books that I've read this year.

Harry Black is a conscientious objector to the war; he is also an artist. His brother Ellis is a soldier; he is also a writer. They don't see eye-to-eye, however, both risk his their lives for his country. Harry is a firefighter—tasked with responding to the fires that break out during the devastating air raids on the city of London. In a rare wartime opportunity, Harry and his brother meet up for a beer at a London pub. Soon after they separate, the block where the pub stood is bombed to obliteration. Harry finds himself in the hospital in a hazy, surreal state of shock. Ellis' whereabouts are unknown. There is also a curious young German girl in the hospital—Agatha.

It is in this otherworldly scenario that Harry draws and thinks, and digs to the tune of an unknown musician who plays with great beauty amidst the horrors. The reader has the benefit of understanding the musician's purpose. The story is told in prose, in Harry's sketches, and in the haunting speech of the musician, whose words turn often to song,

I've a story to tell of Harry Black,
who went to the Underworld and how he came back;
of the love for his brother, who'd pushed him away.
Of London by starlight, under attack,
of bombs falling, of people calling
through darkened streets,
of sirens and wayfarers, of lost souls,
of vicious women and mindless dogs.
These are the things of which I'll sing.

There are many books about WWII, the Kindertransport, the bombing of London. None are like this one. Read it.


My copy of Voyages in the Underworld of Orpheus Black was provided by the publisher.
- June 28, 2019