Who Was First? Discovering the Americas 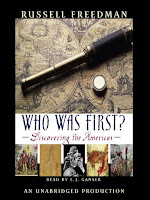 (This review is of the audiobook version)

Who Was First? Discovering the Americas is a detailed look at the many possible interpretations of the "discovery" of the Americas.  Working backwards , Russell Freedman begins with Columbus' well-known voyage, and travels back in time to the voyages of China's Zheng He and Scandinavia's Leif Eriksson, to the journeys of America's true "first" discoverers, Stone Age immigrants who arrived 20, 30 or even 50 thousand years ago.

Who Was First? makes use of first person accounts and log books when available, and offers fascinating and little-known facts. When Columbus "discovered" America, "the central Mexican plateau, heartland of the Aztec empire, may have contained as many as 25 million people, compared to fewer than 10 million living in Spain and Portugal.  That would have made Mexico the most densely populated place on Earth at the time, with more people per square mile than China or India." (!) A lesson, not only in history, but in scientific method, Freedman carefully distinguishes between myth, theory, probability, and fact.

Read with enthusiasm and zeal for the topic, L.J. Ganser's rendering of Freedman's book should keep listeners engaged, but sadly, listeners of the audio version will miss out on the many maps and photos in the print version.

Although, the audiobook version makes no comment about sources, a look at the print copy shows that Freedman has done his customarily excellent job of research. Chapter notes, Bibliography, Acknowledgements, Picture Credits and Index are included in the print version.
- January 11, 2010