Earth Hour - Switch off your lights for one hour on 3/28/2009 at 8:30pm local time.
Not children's lit, but a great message on the impact that a single person, even a child, can have on the environment. 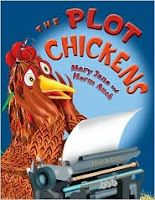 Auch, Mary Jane and Herm. 2009. The Plot Chickens. New York: Holiday House.
Full of puns and poultry yolks, I mean jokes, The Plot Chickens is a tongue-in-cheek look at writing a book. With the help of an encouraging, young(!) librarian , Henrietta the chicken writes her own book, and it's even reviewed in Corn Book Magazine, although reviewer "Noah Lyke" notes,
"Henrietta lays an egg with her first book."
Informative ,
"Rule 7: Make your story come alive by using all five senses"
and funny at the same time, this book is a brightly-illustrated, hilarious look at the writing process.
- March 24, 2009 No comments:

10 Things I Can Do to Help My World 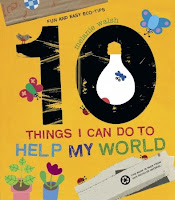 I love this book! With its bright colors, double-spread illustrations, lift-the-flaps, and simple messages, it's a real winner!

Even the youngest of listeners can rally to the environmental cause with this eye-catching book. The simplest of messages can be read to the very young,

in smaller print, (artfully positioned to become part the illustration) there is a slightly more complex message,

"If everybody did this, it would greatly reduce the number of trees we use to make paper."

This book is fun with a purpose! Check it out!

The Porcupine Year, sequel to The Birchbark House and The Game of Silence, continues the adventures of an Anishinabe, or Ojibwe girl, Omakayas (Little Frog). In The Porcupine Year, so named for the porcupine “medicine animal” that befriends Omakayas’ brother, Omakayas is now twelve years old and is traveling with her family in 1852. The U.S. government is moving the native people ever westward, and Omakayas’ family hopes to join their relatives somewhere northwest of their homeland in current-day Minnesota.

In third person narration, The Porcupine Year recounts a year in the lives of the Anishinabe family. True to the Native American view of life as a circle, the book begins in spring and ends full-circle in the following spring. During that time, Omakaya’s annoying younger brother, Pinch, matures into a resourceful boy named Quill, Omakayas herself, earns a new name, Leading Thunderbird Woman, and the family endures hardship and adventure on the trail west. Native American culture is woven seamlessly into the story, and is experienced through context, rather than explanation. When Omakayas and Pinch narrowly survive a trip through dangerous rapids, the reader completely understands the symbolism behind Omakayas’ decision to leave her precious red beads on a rock by the river as a gesture of thankfulness. Native words are sprinkled liberally throughout the story, but few will send readers to the included glossary,

“’We should continue north, giiwedin,’ said Old Tallow. ‘Few chimookomanag have made their homes in the great woods and lakes. We don’t want them to kick us out again!’

‘I still think that my brother might come through this way,’ said Deydey. ‘This is our old stomping ground. We hunted here long ago, But now…’

‘Game is getting scarce.’

‘There is always good fishing on this lake. But I think we are camped close to the big path of our enemies, the Bwaanag. If their warriors come across us on their way back to their homes, after a raid – mad that they got nothing, howah! – we’d be in big trouble.’”

Native culture is also evident in the respect that Omakayas and the other children have for their elders. The Porcupine Year, is not, however, a novel that merely glorifies the Indian way of life and excoriates the Whites. Rather, Porcupine Year is an honest novel that treats each person individually. Although the whites are understandably blamed for the Anishinabe’s forced migration, the family readily takes in two white children that have been left homeless orphans after a fire. Omakayas’ father is half-white himself. Later, it is a relative from their own tribe that steals from Little Frog’s family, and members of the fierce Bwaanag tribe that kidnap members of the family. As in all cultures, there are good and evil people, and Erdrich does not shy from presenting both types.

Overall, however, The Porcupine Year is not a Native American story, it is the story of a girl…
a girl with a darling baby brother, a girl in a budding romance with a local boy, a girl seeking the approval of her father, a girl with a stern but loving mother, a pesky younger brother, a doting grandmother and a mean-spirited cousin. In short, a girl like any other girl - a girl that readers will understand.

The Porcupine Year is not as deep and soul-searching as the multiple award-winning, Birchbark House, but its faster pace and shorter length (193 pages) makes it more accessible to younger or less-avid readers. The Porcupine Year can easily be read on its own, without its prequels. Some Native American legends are included as stories within the story; a glossary of Ojibwe words and author’s notes conclude the book. Pencil illustrations are by the author. Highly recommended for fans of adventure, historical fiction, coming-of-age, and Native American books. Grades 5 and up.

Brown, Don. 2008. All Stations! Distress! : April 15, 1912: The Day the Titanic Sank. New York: Roaring Brook Press. ISBN: 9781596432222.
The sinking of the Titanic has fascinated every generation since the fateful day on April 15, 1912. Many of the books written about it disaster are above the reading level or comprehension of elementary school students.
All Stations! Distress!, generously illustrated in simple, yet serious watercolor and pencil drawings, is suitable for younger readers. It accurately recounts the gravity of the disaster without sensationalism, focusing instead on the historical facts, (100,000 people watched the initial launch of the Titanic, S.O.S. had only recently been adopted as a distress signal)
as well as the actions and words of individuals on board,
the famous and wealthy owner of Macy's, Isidor Straus started for the lifeboat reserved for women and children , "then returned to her husband, saying, 'We have been together for many years, and where you go I go.' "
The lifeboat went without her and both perished.
A bibliography follows the story. All Stations! Distress! : April 15, 1912: The Day the Titanic Sank fills a grade-specific niche. Grades 4 and up.
- March 17, 2009 No comments:

Vowell, Sarah. 2008. The Wordy Shipmates. Prince Frederick, MD: Recorded Books.
I rarely have the time to read adult books, but I'm so glad that I made time to listen to The Wordy Shipmates! It was not available for download from my library, so I ripped the 6 CD set to my mp3 player - total playing time, about 7 hours.
The Wordy Shipmates is a nonfiction account of the Puritan settlers that founded the Massachusetts Bay Colony and subsequent "spin-off" colonies, including the "anything goes," rogue colony of Rhode Island. The book is read by the author, Sarah Vowell, with celebrity readers providing the voices of famous Puritans, John Winthrop, Roger Williams, etc.
Sarah Vowell (the voice of Violet in the movie, The Incredibles and frequent contributor to Public Radio's, This American Life) has an endearing, quirky, almost lisping voice that is engaging, earnest, and dryly comedic.
Vowell's Pentecostal upbringing is apparent in her deep knowledge and interest in the bible. Her view of the Puritans, however, is not whitewashed by her religious upbringing. Quite the contrary - her intense look into the souls of the Puritans is honest, discerning, and funny - but not irreverent. She employs her unique talent for adding modern relevancy to history.
When she relates the famous sermon preached to the colonists by John Cotton as they departed Southampton in 1630, she notes that having the famous preacher at the ship launching is "like scoring Nelson Mandela to deliver the commencement address at the neighbor kid's eighth grade graduation."
In another example of her 21st century look at 17th century life she recounts the English war with the Pequot tribe.
The Mohegan and Narragansett natives attempt to show solidarity with the English by sending the English five severed Pequot heads. Vowell wryly comments that nothing says Puritan fidelity like a bouquet of body parts.
Vowell probes deep into the concerns of the English, the Puritans, and the natives and relates each group's justifications for its actions, withholding judgment, leaving the listener to draw her own conclusions.
If all history classes were taught by Sarah Vowell, it would be the most popular subject in schools!
The Wordy Shipmates is highly recommended.
- March 16, 2009 No comments:

On reading, spelling and life

I recently attended my 4th regional spelling bee – the one in which the winner travels to Washington, DC to compete in the Scripps National Spelling Bee. Some thoughts on reading came to me this year as I watched the students compete, spelling everything from raj to Baedeker. It occurred to me how much reading and cultural factors affect a student’s chances to succeed. Of course, each student receives a study guide, but few have a chance to remember the many thousands of unusual words on the list. The official list, contains words of Latin, Arabic, Asian, French, Slavic, Japanese, Greek, Old English, New World, Italian, Spanish, and Dutch origin, as well as eponyms (words named after individuals).

I watched as an Asian speller rushed through tatami without the slightest hesitation, while a young Caucasian girl struggled with the word sombrero. An urban boy was stumped by forsythia, while another Asian speller easily spelled raj. My own daughter had no need to study bezoar (she knew it from the Harry Potter books) and ersatz (thanks, Lemony Snicket), but was stumped by sorghum, a grain originally from Africa. While we may be good cooks and often use molasses, our molasses is known only by its brand name rather than its source. If only she were a fan of historical fiction! ;-)

My point is, in spelling and reading, as in life, we are all limited by our cultural context; the more we can do to expand it, the wiser we will be.
- March 12, 2009 No comments:

Anderson, Laurie Halse. 2008. Chains. Narrated by Madison Leigh. Brilliance Audio.
(Running time: about 7.5 hours)
This highly-acclaimed novel by award winning author, Laurie Halse Anderson, is an interesting juxtaposition of America's fight for independence and freedom from British rule, against its simultaneous enslavement of African people. While this obvious contradiction may have gone unnoticed by American colonists, it becomes a harsh and perplexing reality for Isabelle, a young slave girl faced with a never-ending stream of tribulations.
Stolen out of freedom, she and her sister are sold to a loyalist New York couple during the start of the Revolutionary War. At first struggling to choose sides, loyalist or patriot, Isabelle comes to the conclusion that her fate is not tied to that of the Revolution. Her chains are not the chains of America.
Although the plot is sometimes contrived, Madison's Leigh's reading of Chains is compelling, and at times moving, to the point of tears. An excellent and fast-paced historical fiction novel, suitable for middle-schoolers.
Chains was chosen as a 2008 National Book Award finalist for Young People's Literature.
- March 05, 2009 No comments: