The Bad Seed - a review 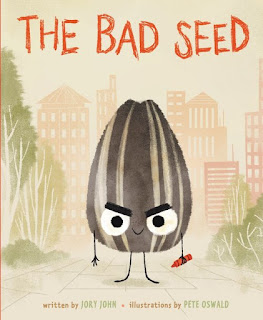 The Bad Seed was once a happy seed in a lovely sunflower. Could he help it that he was harvested for a bag of sunflower seeds and later spat out under the bleachers at the baseball game? It's no wonder he became bad!

Too often, I hear of "the bad kid" in school or even preschool! Preschool and elementary school children are way too young to be written off as "bad seeds."

I hope that The Bad Seed will remind us of three important things: not everyone is bad all the time; there is a reason for bad behavior; people can change. As the Bad Seed says,

"And even though I still feel bad, sometimes,
I also feel kind of good.
It's sort of a mix.
All I can do is keep trying."

The illustrations are funny and wonderfully expressive. If you work with children, share The Bad Seed.
- October 27, 2017 2 comments:

Death on the River of Doubt - an audiobook review 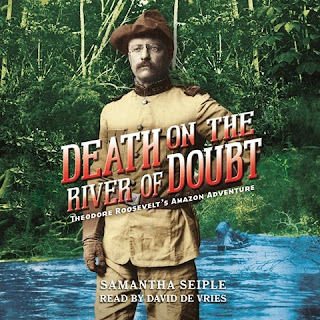 Modern presidents usually retire to enjoy family and do charitable works.  Theodore Roosevelt was unusual even in his day. Small and sickly as a child, he became a fearless outdoorsman.  After his presidency, despite his advancing age, he accepted a dangerous mission to survey an uncharted Brazilian river with a team of Brazilian and American explorers and cartographers.

Relying heavily on the journals of the explorers, Samantha Seiple tells a riveting true story of the exploration of the river that now bears his name.  i listened to the audio version, but I'm sure it's equally entertaining in print.

Generally listed as a YA nonfiction title, this is also suitable for older middle school readers. Adults will find it interesting as well.  In audio book format, it's a brisk 3.5 hours.

Rise of the Jumbies - a review 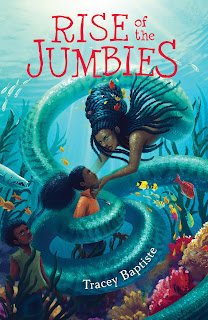 Rise of the Jumbies
by Tracey Baptiste
Algonquin Young Readers, 2017

"There are more children missing," Mrs. Ramdeen said.  "Three of them, all of them lost by water.  The sea, the river, and now the well."  Her voice carried over the sounds of the market.  People dropped the produce they were buying to watch and listen.  Mrs. Chow tried unsuccessfully to hold back a sob.
"Children fall into danger all the time," the witch said.  "Especially by the water."
"But three in less than a day?" Mrs. Ramdeen asked.
"Coincidence," the witch said, shrugging.  She looked pointedly at Corinne and pursed her lips as if she was waiting for something.
Corinne swallowed.  "Could it be a jumbie?"

Through the adventures of  Corinne, the series' spunky protagonist who is half jumbie herself, the reader will meet the wily head of the mermaids, Mama D'Leau, and many more magical beings.  Some may be helpful if one is careful, like the land-loving, Papa Bois and the local white witch. Some will cause only evil.

Corinne and her friends travel with mermaids to Africa to unravel mysteries that may free the children of her village who have been trapped under the sea. They will meet danger and deception at every turn.


I suggest starting with the first book in the series, The Jumbies, to better familiarize yourself with the culture and the large cast of characters.

Can't get enough of jumbies?  Learn more.
Not having read the first book in the series, I wish I would have seen this first.  It, and the field guide below, would have been helpful.

Watch the trailer for the first book in the series, The Jumbies.


My copy of Rise of the Jumbies was provided by the publisher at my request.
- October 17, 2017 No comments: 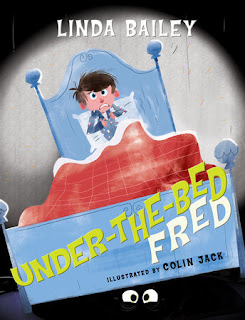 
Under-the-Bed-Fred is the first in a new chapter book series. Like many young kids, Leo is convinced there is a monster under his bed. He is right. Tired of leaping to/from the bathroom, Leo decides to confront the monster. Leo soon realizes that Fred is just doing his job—scaring kids is what he does.

In Chapter 2, "The Monster Gets a Name," the author hits her stride and gives the reader a taste of Fred and Leo's personalities,

And Fred, tickled pink with his new name, goes on to keep Leo up all night,

The story continues with a requisite bully, Fred's visit to school, and a satisfactory conclusion. The vocabulary is simple enough for independent reading, but presented with humor and personality. The images are mixed media, but appear to be primarily watercolor. They are funny in a style that is reminiscent of a Nickelodeon cartoon. All of this is packaged in an attractive small-sized book with sturdy, glossy pages that will stand up in public and school libraries.

Although monsters under the bed are a trope in children's literature, Fred has charming tendencies that set him apart from the rest and he's worthy of investigation. It will be interesting to see the follow-up books. Kids should like this one!


Take a "look inside" Under the Bed Fred at the publisher's website.


My copy of Under the Bed Fred was provided by LibraryThing Early Reviewers
- October 12, 2017 No comments:

One Cheetah, One Cherry - a review 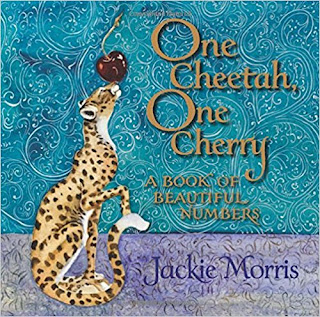 One Cheetah, One Cherry: A Book of Beautiful Numbers
Jackie Morris
Otter-Barry Books

My review as it appeared in School Library Journal:

PreS –A simple animal counting book with a regal air. Each number is represented on a spread featuring a single type of animal, with dogs and mice being the only household varieties. In an interesting juxtaposition, the animals are lifelike and stately, yet playfully attired or engaged. Pandas sport “pretty painted parasols,” tigers play “pat-a-cake,” and mice sip from tiny china teacups. The subdued, earthy watercolor tones are accurate for each species, but the settings and attire have a hint of majesty as a result of the addition of gold leaf and a repeated paisley background motif, often in purple. Also adding a degree of opulence is a rich, mottled ochre color suggesting marble. No seeking or finding is necessary; the animals are large in scale and neatly arrayed for easy counting. White border space on the bottom of each page provides the location for simple, descriptive text that is sometime alliterative, sometimes loosely rhymed: “Two dogs, two balls, one big, one small.” Endpapers offer further opportunities for counting and contain the only numerical representations of the numbers one through 10. VERDICT A unique, artistic addition to the counting canon. 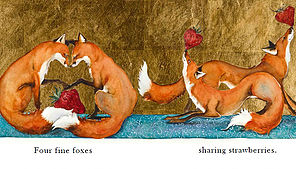 My review copy was provided by School Library Journal