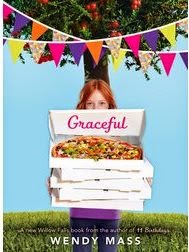 When I reviewed The Last Present by Wendy Mass, I wrote the following:


The Last Present is the final book in the Willow Falls (or "birthday") series, realistic fiction with just the right amount of magic, courtesy of Angelina, the mysterious old woman with the duck-shaped birthmark. Angelina is seemingly the architect of all that occurs in Willow Falls, the town where nothing happens by coincidence and everything happens for a reason. Readers of the series will delight in revisiting their favorite characters - Leo, Amanda, Tara, Rory, David and all rest, as their stories intertwine and the story of Angelina is finally revealed. ... I'm sad to see it come to an end. It's been great fun!

Apparently, I wasn't the only one who was sorry to see the Willow Falls series come to an end. In the forward to Graceful (Scholastic, 2015), Wendy Mass writes that her readers let her know "IN NO UNCERTAIN TERMS" that they were not ready for the series to end.  Graceful (due out tomorrow) is a gift to her readers.

I think fans of the series will be happy with Graceful, in which Grace fills in (somewhat unwittingly) for the mysterious Angelina as the architect of all that occurs in Willow Falls.  This is a series about friendship and family and the cosmic connectedness of all things. It can best be described as magical realism, and it is a series that should be read sequentially.  Mass does her best to catch the reader up with previous occurrences, but the series is so intricately plotted that it is difficult to skip a book or read them out of order.

Willow Falls has been a great place to visit, but I think Ms. Mass is ready to move on now.  All of our questions have been answered and all loose ends are tied.  It's been fun!  Enjoy!

My Advance Reader Copy was supplied by the publisher.
- April 27, 2015 No comments:

I recently reviewed two audiobooks with a peculiar connection.  Masterminds is a thriller set in the seemingly perfect town of Serenity, New Mexico.  The Way to Stay in Destiny is a character-driven novel set in the woefully imperfect town of Destiny, Florida.  Neither town is quite what it seems.  Click the links to read the complete reviews.

A contemporary science thriller set in New Mexico - a real page-turner!  This is the first in a planned series.  I'm not sure how he can top this one!

The Way to Stay in Destiny by Augusta Scattergood and read by Michael Crouch. (2015)

Historical fiction set in 1970s Florida by the author of Glory Be. Another paean to the power of music.  (Try Echo by Pam Muñoz Ryan, too!)

Thoughts for a Thursday

I'm blogging at the ALSC blog today with a post on "Putting it all together" - books, technology, creative space, diversity, and kids.  Please hop over and check it out.
[http://www.alsc.ala.org/blog/?p=10553]

In other news, if you haven't checked out the new lineup yet, SYNC will  be returning on May 7th.  As they do every summer, they will offer free downloads of classic books paired with current books with a similar theme.  Each week features a different pairing. Week #1 begins with Rebecca by Daphne Du Maurier, paired with Beautiful Creatures by Kami Garcia and Margaret Stohl.
Click here to see all of the SYNC titles available this summer.
[http://www.audiobooksync.com/2015-sync-titles/]

And finally, here's a link to an audio book review that I wrote for AudioFile Magazine.  I don't think I ever posted it here. The Julian Chapter: A Wonder Story by R.J. Palacio, read by Mike Chamberlain.  Brilliance Audio, 2014.
[http://www.audiofilemagazine.com/reviews/read/93231/]

Who Was Harriet Beecher Stowe? a review 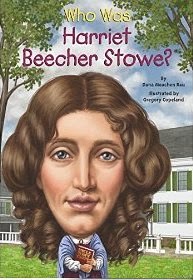 I have to admit that Who Was Harriet Beecher Stowe? is the first I've read in the Who Was ... ? series.  When I first began receiving them a year or so ago, I thought that kids would be turned off by the caricature cover art.  I was wrong.  They have been quite popular for biography assignments. One reason is because Grosset & Dunlap (Penguin) was smart enough to make them each about 100 pages long.  (Teachers, I do wish you would be less strict with page counts, particularly in nonfiction.  Kids miss out on a lot of great books because they're trying to reach that magic number.)

In any case, I am pleased to see that the latest entry into the Who Was? series is writer Harriet Beecher Stowe, best known for her book Uncle Tom's Cabin, or for being, as President Lincoln said,  "the little woman who wrote the book that made this great war."

The first chapter bears the title of the book, "Who Was Harriet Beecher Stowe?" and gives a very brief synopsis of her life and its impact on history.  Other chapters elaborate on her personal life and her book, Uncle Tom's Cabin.  Today's young readers should find it fascinating that in an age before telephones, radios, televisions and computers, the publication of this one book made Harriet Beecher Stowe a wealthy and well-known celebrity in the U.S. and Europe, and it helped bring about the end of slavery by changing public opinion.

The book is illustrated with black and white drawings, and also contains several double-spread illustrations featuring background information that is necessary to gain an understanding of the era. These inset illustrations explain The Famous Beecher Family, The Underground Railroad, The Congregational Church, and Frederick Douglass.

The story of Harriet Beecher Stowe is a perfect illustration of the power of the pen. Hopefully, it will inspire young readers to seek out a copy of Uncle Tom's Cabin in the future.

Rounding out the book are time lines and a bibliography.

Who Was Harriet Beecher Stowe? will be on a shelf near you on 4/21/15. My copy was provided by the publisher.

Following on the heels of the Who Was... series' popularity, there is a  What Was ... series and now, a Where Is... series.  Details on all three series may be found on the publisher's site.

Today is Nonfiction Monday.  Stop over to see all of today's reviews.