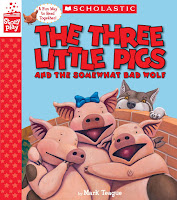 TEAGUE, Mark. The Three Little Pigs and the Somewhat Bad Wolf, illus. by Mark Teague. 48p. Scholastic/Cartwheel. May 2017. Tr $5.99. ISBN 9781338157741.
PreS-Gr 2--When a farmer and his wife decide to move to Florida, they pay the three little pigs for their good work and send them on their way. And so begins the familiar adventure, with a comic twist. One pig spends his wages on potato chips, one buys "sody-pop," and the third, "who was altogether un-pig-like," buys building supplies. Teague's take on the story includes a hapless wolf who is very hungry and only somewhat bad. The three comically large anthropomorphic pigs are painted in Teague's signature action-packed, droll style. Jon Scieszka's The True Story of the Three Little Pigs may be the fractured folktale standard, but Teague's title is a worthy addition to the canon. This is a reissued, smaller variation of the original book (2013) and is repackaged as a "Story Play" book with two new additions--word bubble insets containing questions to promote early literacy skills (e.g., "Why was the wolf able to blow the straw house down?") and suggested writing and drawing prompts. VERDICT This version may suit educators but will be best shared in one-on-one settings because of its new, smaller size. For story-times, choose the original and enjoy these pigs in their full-size glory.

The Dollar Kids - a review 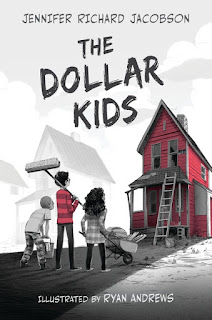 After Lowen's friend is killed in a random shooting, he discovers an article describing a program in which families can apply to receive a home in a declining mill town for only one dollar.  Lowen is surprised when his family agrees to apply and is accepted into the program. It's a difficult transition. His father stays on in their old town of Flintlock to continue earning money, while Lowen, his older brother, younger sister, and mother work to fix up their dilapidated new home and get his mother's new family business up and running. Lowen hoped that the move would ease his mind after Abe's death, but life in Millville offers troubles of its own,

"Whereas Mum's shop was going to be a take-out place, the Busy Bee had around ten tables and a small bar.  A sign at the door advised them to seat themselves; they settled into the one remaining booth on the side of the room.  As they did, the noise level dropped to a whisper and all heads turned their way. If Dad were there, he'd probably wave to the onlookers or introduce the family to the people at the closest table. But that wasn't Mum's way. She dropped her eyes to the menu, willing others to be polite and look away.  Anneth pulled out her phone and began texting. Lowen reached to examine the bee-shaped salt and pepper shakers and wished for a moment that he hadn't complained about being hungry.

A man and a woman came in and, noticing that there were no booths left, resigned themselves to a center table. It didn't make sense, but Lowen felt like his family had sat down where they didn't belong."

The Dollar Kids touches on several themes including (but not limited to) moving, friendship, gun violence, grief, and perseverance, but it never gets bogged down and never feels forced. These things are merely part of a difficult period in the life of Lowen Grover's family. The story feels real and forces the reader to consider things from multiple points of view. There is often a rational motivation for behaviors that we might find hurtful or even inexplicable.

The setting and premise for the book is unique, but its best feature is Jacobson's storytelling format.  The book begins with a multi-page comic drawn by Lowen, a talented artist. (Artist Ryan Andrews created the comic artwork.) It is through the comic that we learn the circumstances of Abe's death.  Following the murder, Lowen refuses to draw. Later, as he comes to terms with life in Millville, he slowly begins to draw again and his comics appear sporadically in the latter half of the book. A letter and a final comic bring touching closure to a great story.

This is a tightly woven story, recommended by the publisher for ages 10-14. I thoroughly enjoyed it.


Due on a shelf near you in August!


A note from The Dollar Kids author Jennifer Richard Jacobson

I believe that the offer is now expired, however, the town of Ollolai, Italy, recently sold homes for one euro, with similar restrictions to the ones that "the dollar families" experienced in Millville.  You can read about it on CNN Travel , "Your own Italian home for $1? You can buy it in Ollolai" (Note: CNN's site does contain annoying ads.)


My copy of The Dollar Kids was provided by the publisher at my request.  The Dollar Kids is on this month's Early Reviewers List from LibraryThing (deadline to request is March 26) .

The Rabbit and the Shadow - a review


The Rabbit and the Shadow
by Mélanie Rutten
Eerdmans, 2018
(originally published in France) 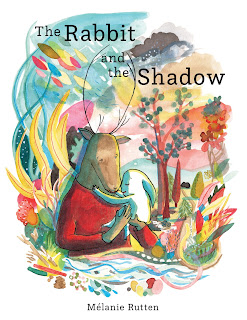 It’s a good idea to step out of our cultural bubbles from time to time. One way to do that is experiencing books from other countries. These books often have an instant feel of “otherness,” when compared to our own American canon of children’s literature. Some examples are the dark humour of the British, Jim: Who Ran Away from his Nurse and Was Eaten by a Lion (yes, he does get eaten!) , the family realism of Spain’s, Manolito Four-Eyes , and the beautiful, cutting and cautionary,  Queen of the Frogs from Portugal.

When I entered my name to win a copy of The Rabbit and the Shadow by Mélanie Rutten, I did so because even on my laptop screen, I could tell that the illustrations are exquisite. When I won a copy from LibraryThing Early Reviewers, I was also pleased to see that it was originally published in France.

The pen and watercolor illustrations are in gentle hues that fit the story’s outdoor setting. Most are small vignettes that expertly accompany the nearby text.  Rabbit is the story’s main character, but his life becomes entwined with those of the Soldier, the Cat, the Book, a Shadow, and the Stag, Rabbit’s caregiver. When the Soldier forcibly takes Rabbit from his hiding hole, a small vignette manages to encapsulate the vastness of the unknown world, the fierceness of the Soldier and the apprehension of the Rabbit.

The familiar valley lies behind them, and a red sky ahead hints at a dangerous future as the Soldier points his sword toward the future with the Rabbit in his grasp,


The Rabbit and the Shadow is a lengthy, thoughtful book that is best suited for older children.  Although the Soldier has abducted the Rabbit, the Soldier bears him no ill will. The Soldier is merely angry, and the reader will find that the Soldier harbors a secret. The Cat suffers from a recurring dream that will not resolve; the Book searches for knowledge. The Stag searches for his Rabbit. The Shadow searches for nothing, and is ironically enlightening, as Rutten explores the weighty issues of anger, responsibility, separation, and growing up.

Artfully placed in the center of a beautiful yellow-hued palette, are the following words, surrounded by a dreamlike border illustrating the characters’ thoughts

“‘What do you think about
to feel less afraid?’
asked the Rabbit.
‘Nice things from the past,’
replied the Soldier,
‘like eating rice pudding cake
when I was little.’

‘You’re still little!’ said the Cat. ‘Me, I think
about nice things to come.’
‘Like when you’ll have a mustache?’
teased the Soldier.

The Cat thought about his dream.
They all though for a moment,
about their dreams. “


I don’t know if The Rabbit and the Shadow is typical or exemplary in French children’s literature. Here in the United States, it is strikingly attractive, thoughtful, and distinctive.

Note:
If you're interested in reading the best in books from other countries, ALSC recognizes excellence in the category every year. The Mildred L. Batchelder Award is awarded yearly to “the most outstanding children’s book originally published in a language other than English in a country other than the United States, and subsequently translated into English for publication in the United States.”

This year’s winner of the Mildred L. Batchelder Award is TheMurderer’s Ape by Swedish author, Jakob Wegelius.
- March 05, 2018 No comments: