Echo: A Novel - a review 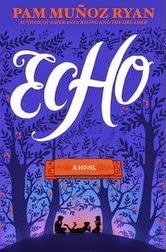 If this is how the year is starting out, it's going to be a banner year for middle-grade books.  First, Gordon Korman's Masterminds (more on that fantastic new thriller another day) and now Echo: A Novel.

I received an Advance Reader Copy of Echo from Scholastic and was intrigued that it was wrapped in musical notation paper and had a smartly-boxed Hohner Blues Band harmonica tied to it.


I was happy to see an apparently music-related book, and was somewhat surprised to find that Echo begins with a fairytale, "The Thirteenth Harmonica of Otto Messenger," a fairytale replete with abandoned princesses, a magical forest, a mean-spirited witch, and a prophecy,

"Your fate is not yet sealed.  Even in the darkest night, a star will shine, a bell will chime, a path will be revealed."


Though brief, I became enthralled with the tale and was surprised and taken aback when I reached Part One and found myself not in the fairytale forest, but in

Trossingen, Baden-Württemberg, Germany, 1933, home to the world's oldest harmonica manufacturer.  I couldn't wait to find out what became of the abandoned princesses, but soon found myself wrapped up in the story of young Friedrich Schmidt, a German Jew during Hitler's ascendance to power.  This kind-hearted, young boy of a musical family was surely destined to be gathered up in the anti-Semitic wave sweeping through Germany. I became engrossed in Friedrich's story, anxiously hoping that things would work out for him and his family, and was again surprised when I reached Part Two and found myself in

Philadelphia, 1935, home of the then-famous Albert Hoxie and the Philadelphia Harmonica Band, and of the Bishop's Home for Friendless and Destitute Children, where I found myself in the company of piano-playing orphans, Mike and Frankie Flannery.  Their story was no less heart-wrenching than Friedrich's, and I found myself desperately rooting for the young boys when I suddenly arrived

in a migrant worker's community in Southern California, 1942, where young Ivy Maria Lopez was about to play her harmonica on the Colgate Family Hour radio show, but her excitement was short-lived.  I fell in with this hard-working, American family and hoped, along with Ivy, for her brother's safe return from the war.

Of course, there's more, but this is where I will leave off.

Pam Muñoz Ryan has written a positively masterful story that will take the reader from the realm of magic through the historical travails of the oppressed and the poor in the midst of the 20th century.  Through it all, music gathers the stories together in a symphony of hope and possibility.  In music, and in Echo, there is a magic that will fill your soul.

It may only be February, but I predict that praise for Echo will continue throughout the year. 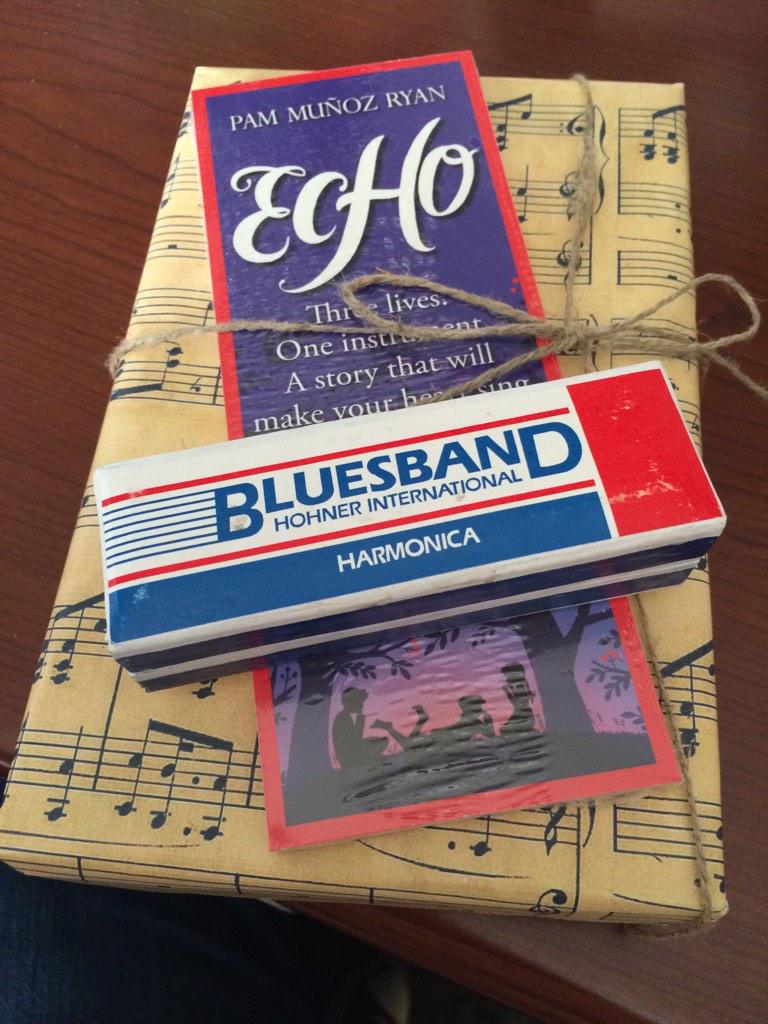 Feathers: Not Just for Flying

As I've mentioned before, I had the great honor and opportunity to serve again as a second round judge on the Elementary/Middle Grade Nonfiction book award panel for the Cybils Awards.  If you're not familiar with the Cybils awards, they are the Children and Young Adult Bloggers' Literary Awards. 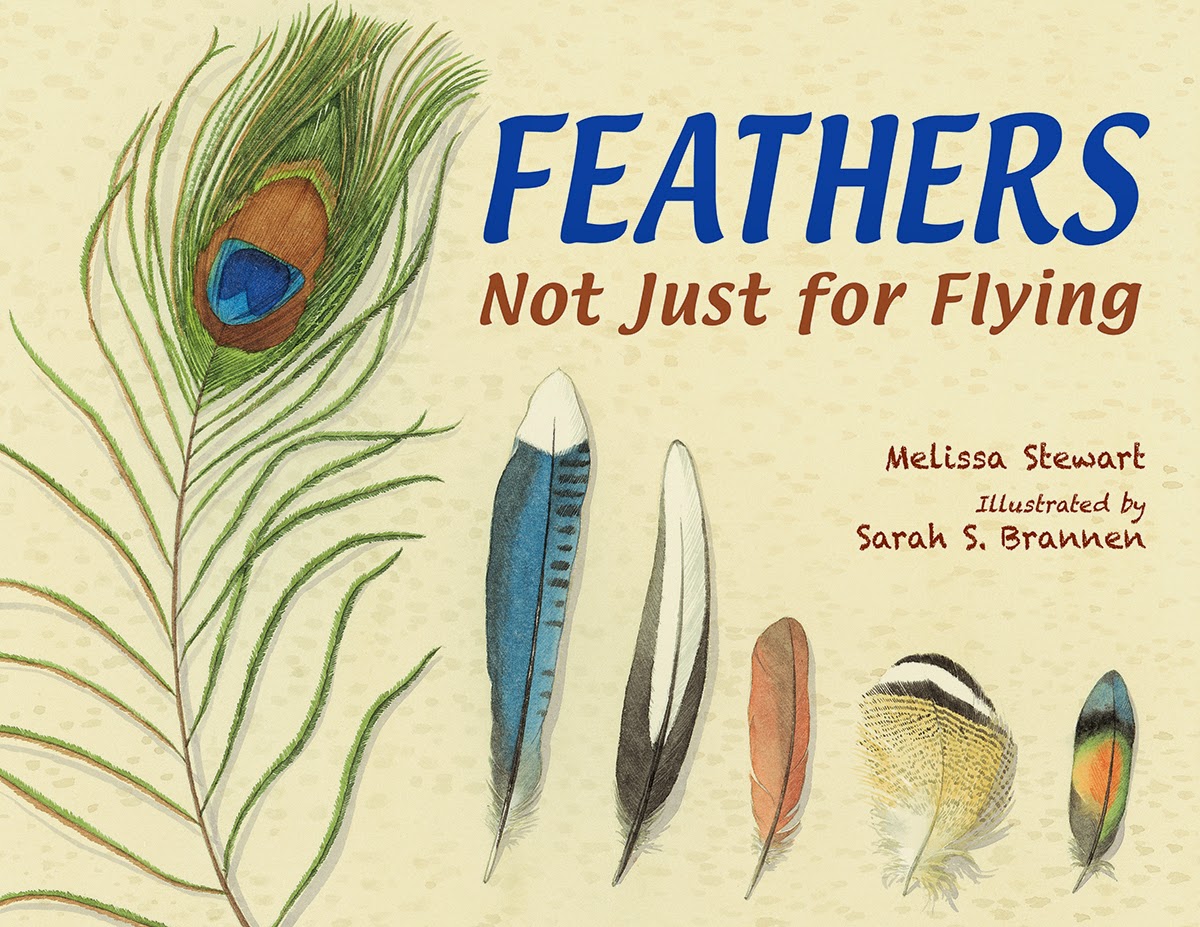 
Using child-friendly similes, Feathers shows that there is both beauty and purpose in nature and that, although we do not fly, we have many things in common with birds, such as the need to be safe, attractive, industrious, communicative, and well-fed. The simple, large text is suitable for reading to very young children, while the inset boxes contain more details for school-aged kids. The scrapbook-style watercolor illustrations show each feather at life size, and provide a nice jumping-off point for individual projects. Science, art, and prose work together to make this the perfect book to share with budding young artists, painters, naturalists, and scientists, and it will be appreciated by parents, teachers, and kids.

Star Stuff: Carl Sagan and the Mysteries of the Cosmos - a review 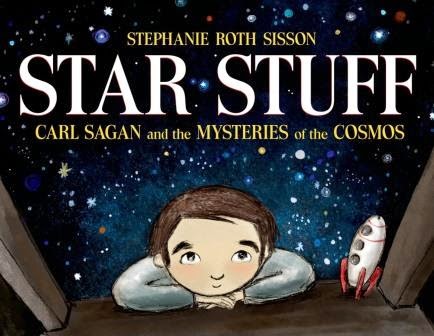 In simple text augmented by word bubbles, thought bubbles, and sketches, Stephanie Roth Sisson gives us the highlights of Carl Sagan's life—but more importantly, she offers a sense of his wondrous enthusiasm for the cosmos,

It gave Carl goose bumps to think about what he had learned about the stars, planets, and the beginnings of life.  He wanted everyone to understand so that they could feel like a part of the stars as he did.
So he went on television.

This is the first book that Stephanie Roth Sisson has both written and illustrated.  The fact that she is enthralled with her subject is apparent in the artwork. Painted cartoon images (often in panels with word bubbles), depict a happy Sagan, wide-eyed and curious.  While some pages are like panel comics, others are full-bleed, double spreads depicting the vastness of the darkened skies, dotted by planets or stars.  One foldout opens vertically, reminding us of our infinitesimal existence in the cosmos.  We are so small, yet we are reminded,

The Earth and every living thing are made of star stuff.

Preview the first eight pages of Star Stuff on the publisher's website.

Note:
Carl Sagan graduated from Rahway High School in Rahway, NJ.  As far as I can tell, he's not mentioned anywhere on the school's website. Pity.

It's STEM Friday! (STEM is Science, Technology, Engineering, and Mathematics)
See all of today's STEM-related posts at the STEM Friday blog.

The Secret Sky: A Novel of Forbidden Love - an audiobook review

My review of The Secret Sky as it appeared in the February, 2015, edition of School Library Journal. Author Atia Abawi is of Afghani descent and was a CNN correspondent in Afghanistan. Her insight into the life of a young Afghani girl is invaluable.

Young Adult
ABAWI, Atia. The Secret Sky: A Novel of Forbidden Lovein Afghanistan. 7 CDs. 7:45 hrs. Recorded Bks. 2014. $77.75.ISBN 9781490627403. Playaway, digital download.Gr 9 Up-- This story is told through the alternating viewpoints of three young Afghanis--Fatima, a Hazara girl on the cusp of womanhood; Samiulla, a teenaged Pashtun boy disillusioned by the "religious" teachings of radicals; and Rashid, a believer in the harsh justice and rhetoric of Islamic fundamentalists. On the path to the well, Sami and Fatima meet by chance, sparking a platonic affection that will place the young people, their families, and their village in danger. In a land where every action is scrutinized and measured, their blossoming relationship is a sinful affront to propriety that cannot be accepted. Abawi does not shy away from the frank realities of a woman's life in Afghanistan. Scenes of torture and murder may disturb sensitive listeners; however, they make the couple's faith in the possibility of a better life all the more poignant and miraculous. The employment of a narrator of each gender, Ariana Delawari and Assaf Cohen (both Arabic speakers with believable accents), heightens the distinction between the sexes that permeates every aspect of every waking hour for rural Afghanis. VERDICT A perfect choice for libraries seeking topical and diverse titles

The Pied Piper of Hamelin - an audiobook review

I often read books that I don't like, but over the years, I've posted fewer and fewer negative reviews here.  I recognize that a good deal of effort by many people goes into every published book. In many instances, a book is more than someone's dream realized; it is also a livelihood.  Here at Shelf-employed, I prefer to focus on books that I consider to have value.  If I review books I dislike for a magazine, website, or journal, my honest review will normally stay within the pages of the entity that requested my opinion.

All that aside, I feel an impulse to share my recent review from the February, 2015, issue of School Library Journal. It was the most peculiar, off-putting book I've reviewed in a long time.


BRAND, Russell. The Pied Piper of Hamelin: Russell Brand's
Trickster Tales. 1 CD. 45 min. S. & S. Audio. 2014.
$9.99. ISBN 9781442377325.
Gr 4–7-- In this retelling of the medieval German folktale, the hubris-filled residents of Hamelin are overrun by a polygamous, narco-egalitarian, rat collective of the worst order. Only "gammy-legged" Sam and his mother possess any measure of humility and kindness (for which they are later rewarded). As in the original, the citizens agree to pay the curious, almost otherworldly piper if he can remove the rats. When they later renege on their promise, the piper removes the children of Hamelin as well. As the musing, interrupting narrator, Brand quietly and thoughtfully delivers asides and astute observations as to the character of Hamelin's citizens, who include Fat Dave and Sexist Bob. As the piper, Brand's voice has an almost mesmerizing quality, like the legendary piper's music, lulling the listener into a contemplative state. Sadly, occasionally brilliant phrasing and subtle commentary are sandwiched between overly exuberant character voices and crass jokes. One can write a children's book with wryly amusing social commentary; one can write a children's book replete with poop and fart jokes. It is nearly impossible to balance the two. VERDICT It will be difficult for this book to find an audience outside Brand's existing fan base. Too bad. It had promise

Coming Monday: a recent audiobook review of a book that I really liked!
- February 07, 2015 No comments:

The Last Song - a review

Some locations and eras appear regularly in historical fiction  - the US during the Civil War, the Midwest during the Dust Bowl Era, the British Isles in the medieval period, Europe during the Holocaust, the list goes on ... but seldom does it include Spain during the Inquisition.

In this first-person, chronological account, teenager Doña Isabel learns her family's deepest secret - her parents are not devout Catholics as she was raised to be.  Secretly, they practice the Jewish faith - a practice punishable by death under the rule of Ferdinand and Isabella, and their Grand Inquisitor, Tomás de Torquemada.  Set in Toledo, Spain, 1491, Isabel is the daughter of the King's physician, a position that has always kept the family in wealth and privilege.  As the Inquisition grows more brutal, suspected heretics are forced to wear sambenitos (sackcloth), they are beaten, tortured, murdered, and burned alive at autos-da-fé.

I looked around to keep awake.  The church's walls were festooned with the sambenitos of the heretics who had been burned alive at the stake during different autos-de-fé.

"So many sambenitos," I whispered to Mama.  "They should take them off the wall."

She rolled her eyes. "They are supposed to be reminders to the families of the condemned heretics.  They are warnings to them not to follow in the footsteps of their relatives," she whispered.  "They are a warning to us all."

Her words filled me with fear.


Her parents decide that to keep Isabel safe from the Inquisition, they will promise her in marriage to the son of the King and Queen's most trusted advisor. Luis is loathsome, however, and instead of Luis, Isabel falls in love with Yonah, a young Jewish silversmith, Soon the lives of the entire family are in danger.

If Isabel abandons her lifelong faith a little too easily and if Eva Wiseman paints Isabel's future a little too brightly, this is a small price to pay for a book suits an older, middle-grade audience and draws attention to a terrible period of religious persecution that is not often covered for this age group, grades 6 and up.

Spoiler:
Ironically (in light of today's current political, social and religious climate), Isabel and her family leave Spain counting Moorish refugees as their friends.  Together they head to Morocco in search of freedom and a better life. How much has changed; and yet, how much remains the same.  We learn so little.


Note:
My copy of The Last Song was provided by LibraryThing Early Reviewers. I'm sorry that I did not get to it sooner.