No one can ever recount with certainty the conversations and events that transpired within Thomas Jefferson's sphere of influence at his famous Virginia plantation, Monticello.  However, because of his status as, arguably, the most famous of the nation's founding fathers, the particulars of his business dealings, his ownership of enslaved people, and other financial matters are as well known today as they were in his own time.  Also well-documented are his periods of travel to/from Monticello and the important life events (births, deaths, marriages, etc.) of his legal family members.
Armed with this information, Sally Cabot Gunning has crafted a thoughtful piece of historical fiction that explores the relationships of Martha Jefferson, the former President's eldest child, with her father, her siblings, her large family through marriage, and the people enslaved by her family—particularly Sally Hemmings.
The story unfolds in three parts, arranged by date and the plantation at which Martha lived. It begins with the years 1789-1800, and her residence at the Varina planation with her husband Thomas Randolph, whom she married shortly after returning from France.

Martha had decried the decadence and filth of Paris to Tom Randolph, but in truth, there was something as decadent about Monticello, although in a different way—the slower pace of life, perhaps, or the way her father's French wines and more elaborate French furniture, just now beginning to arrive from France, seemed out of place.  And then Negroes.  They crept about in an unnerving, pantherlike silence that Martha hadn't noticed before she left for France.  What did they hear as they moved about? And why hadn't Martha ever before wondered about that?  Martha puzzled over what seemed such a great change, either in her or in life at Monticello, she truly didn't know which.  She asked Maria, pointing as Sallys' sister Critta whispered out of the room after stirring up the fire, "Were they always so quiet?"

This finely crafted work of historical fiction gently forces the reader to view history through a variety of lenses, none of which are rose-colored. Wishing for an end to the family's dependence on slavery, Martha nevertheless becomes embroiled in a lifelong conflicted existence - constrained to the restrictions and social mores of a Virginia planter's wife and daughter of a President, which render her often helpless yet still complicit in her family's continued connection to enslaved people. The political upheavals of the new nation provides the backdrop of the story, but politics is not the story.  This is a story of a woman's struggle to be a good wife, to be a good mother, to honor her father, and to help shape his legacy.

My copy of Monticello was an Advance Reader Copy supplied by the publisher.
- April 20, 2017 No comments:

The Legend of Rock Paper Scissors - and its Malaysian alternative

The Legend of Rock Paper Scissors 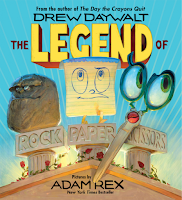 by Drew Daywalt with pictures by Adam Rex
Harper Collins, 2017

I read The Legend of Rock Paper Scissors on the advice of a librarian friend (thanks, Rebecca). It tells the fictional origin story of the game that siblings and playground pals have used to decide things for as long as one can remember.  Of course, with the combination of Drew Daywalt and Adam Rex, you know it's going to be funny.

I don't want to review it, however, I want to tell a story.

When my children were little, a Malaysian friend of mine came over to visit.  We each had three kids and they played together often.  When I suggested that they decide something with Rock Paper Scissors, she was puzzled, so I explained the concept.

"Oh!" she said.  "I know that.  In Malaysia, it's bird, water, rock," and she made the appropriate hand gestures for each.  It took me a minute to wrap my head around that.  Water wears down rock, bird drinks water, rock crushes bird.  At first, it seemed a gruesome game for little kids to play, but who am I to say? Honestly, I always thought that rock covers paper was a rather lame win. Is Bird Water Rock not a more accurate depiction of how things work in the world?

My roundabout point here is that we must always remember that everyone comes into life with a different backstory.  That's what makes the world such a rich and interesting place. That it the reason for the #WeNeedDiverse books campaign.  Not only is it comforting to see yourself in the pages of books; it's eye-opening and mind-expanding and refreshing to see someone different in the pages of books.

And speaking of refreshing, I kid you not ... On another warm summer day, nearly twenty years ago, I asked this same friend if I could get her a cold drink.  She asked for a shandy.

"Half beer, half lemonade," she said. "We drank that in Malaysia all the time."

That was nearly twenty years ago.  How I wish we would have run with that thought to the patent office or the nearest brewer!  Now shandies are so popular - but don't kid yourself into believing that Budweiser invented them.  Just ask someone from Malaysia.

So, enjoy The Legend of Rock Paper Scissors (a sample is below), but keep Bird Water Rock in the back of your head.  Both are worthy of your attention.

Hell and High Water - a review

Many, many years ago, I was a waitress working the graveyard shift at a diner.  When the annual change to Standard Time came rolling around, I thought nothing of it–until I went to work that night.  Standard Time means an extra hour of sleep for most people.  For a waitress working the graveyard shift, the switch to Standard Time means a 9-hour shift with no overtime pay. Why do I mention this? Because this experience helped me to see with great clarity the relevance in a story that takes place more than 250 years ago.

Tanya Landman's publisher notes that author  "explores the lives of history’s dispossessed and disenfranchised."  Not only is this true, but her depiction of 1750s England also has a message and a relevancy to our own era.  When we read of something momentous in a history book, it does not have the same urgency or immediacy that it can have in the a work of historical fiction. If you read in a history book of the change from the Julian to the Gregorian calendar, it would have little meaning to you if you had not had a similar experience. However, consider this scenario from Hell and High Water,

The village went to sleep on the evening of Wednesday, September 2nd, and woke on the morning of Thursday the 14th, yet this was no enchanted sleep or supernatural occurrence.  A year earlier an Act of Parliament had decreed that England's calendar must be synchronized with those of other nations.  In order to do so, eleven full days must be struck from the year.  Drinking coffee in Porlock's, Pa had explained the matter of the Gregorian and Julian calendars in great detail, but Caleb had paid little attention.  It involved politicians. Foreign nations.  Who cared about numbering the days?  It could make no difference to him and Pa.

He had given it no further thought at all until Letty returned from Tawpuddle with a rumor that William Benson would be collecting rent for the whole month of September as usual.  No concession was to made for the changing calendar.  Every tenant had lost eleven days of work and consequently eleven days of pay, but Sir Robert would not lose eleven days of rent.
The news made Anne dizzy with panic. "How can we manage? We will be turned out!"
"It can't be true!" Caleb scoffed.  "No man could be so unfair."


"Word of advice, boy . . ." The steward leaned toward him until his face was an inch from Caleb's.  Raising his voice so that the men who were unloading the boat could hear, Benson said, "If you want to keep a roof over that miserable hide of yours, you keep your head down and your mouth shut.  And you pay your rent when it's due, the same as everyone else."


The fact that Caleb is a person of color in 1750s England only makes his situation more difficult. His father is accused and convicted of a crime he did not commit, and Caleb is left to fend for himself in a world where birthright equals power and power equals money. Hell and High Water is a work of historical fiction, but it is also a murder mystery, and a story of race, class and privilege.  Sadly,  it has great relevance in our modern age.

My copy of Hell and High Water was provided by LibraryThing Early Reviewers. 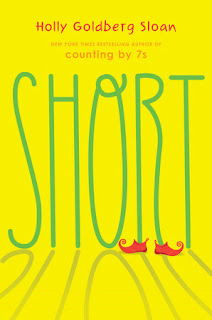 I recently had the opportunity to review Short for AudioFile Magazine.  A link to my complete review of Short is available here. [http://www.audiofilemagazine.com/reviews/read/123871/short-by-holly-goldberg-sloan/] It's a realistic fiction chapter book featuring Julia, a young girl whose mother insists that she try out for a summer community theater production with her younger brother.  Because of her small stature, Julia is chosen (along with her brother) to play a munchkin in "The Wizard of Oz," hardly the way she wanted to spend her summer.

Please read my review for AudioFile for more details, but if you don't have time right now - keep this kernel of information in mind:  If you have a customer, child, parent, or patron seeking a book that includes adult little people, this is the book for you.

I do not want to post medical information about a family member, however, I'd like to mention that one of my children has suffered a life-changing accident, only as a reason to explain my lack of blog posts.  It is the latest of many changes in the last year including a move to Florida, a new job, a hurricane, and now this - the most impactful of events.  I will be posting posting sporadically while I help my child heal and recover.