As the motion picture industry has multiple awards including the Academy, Screen Actors Guild, and Golden Globe, so too, does the publishing industry. In books for young people, the best known are the Caldecott and Newbery Medals, which were awarded this month, and I wrote about earlier. ( See the complete list of winners here: [http://www.ala.org/news/press-releases/2016/01/american-library-association-announces-2016-youth-media-award-winners])

There are however, numerous other awards including (but not limited to) the National Book Award for Young People's Literature, the Cybils Awards (chosen by bloggers and for which I have twice been a judge), The Schneider Family Book Award (which recognizes excellence in portraying the disability experience), the Coretta Scott King Awards (recognizing books by African Americans that reflect the African American experience), and the Pura Belpré Awards (honoring books that celebrate the Latino cultural experience).

Also recently awarded were the Sydney Taylor Book Awards for children and teens.  These awards are given to books that "authentically portray the Jewish experience."  You can read the official press release here: [http://jewishlibraries.org/blog.php?id=315]

Many schoolchildren are introduced to the Jewish experience only through Holocaust education.  The Sydney Taylor Awards recognize all aspects of Jewish culture.

The Association of Jewish Libraries asked for my assistance in promoting this year's winners, and I am happy to do so.  A complete list of winners and honor books is below.

If you haven't read any of the winners of these or other awards celebrating the many facets of our diverse world, consider adding several to your TBR pile.

Note:
Keep watch for the 2015 Cybils Awards winners.  They will be announced on Valentine's Day, February 14th. 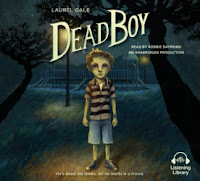 Below is my review of the audio book version of Dead Boy by Lauren Gale and read by Robbie Daymond.  Great plot with some unexpected turns.

Gr 5-7–Crow was once a regular boy who played baseball and had friends and loving parents. But now, he’s dead. At first, being dead wasn’t so bad, but then his rotting flesh began attracting maggots. He couldn’t eat or sleep. His parents divorced. His mother will tell him only that his parents “wished him back to life,” but what kind of life? He’s trapped in a house kept purposefully cold to slow the putrefaction of his flesh. When Melody and her father move in next door, she and Crow become secret friends against the wishes of their parents. Together, they begin to unravel the terrible secret of his parents’ wish. Their forbidden friendship will be tested as they face a series of deadly challenges in their quest for the truth. Though the book’s description promises humor, narrator Robbie Daymond’s presentation of Crow is morose and forlorn. His cheerful portrayal of Melody offers the only break from the macabre atmosphere. VERDICT - Not for the squeamish, this one will be best for middle school fans of ghoulish favorites like The Night Gardener (Abrams, 2014) or The Cavendish Home for Boys and Girls (S. & S., 2012). [“A great recommendation to middle grade fans of dark humor”: SLJ 7/15 review of the Crown book.] 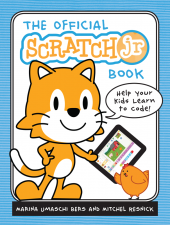 Because I've shown an interest in coding in the past, No Starch Press was kind enough to offer me a review copy of The Official ScratchJr Book by Marina Umaschi Bers and Mitchel Resnick. (2015)

Sadly, I don't have an iPad or Android-based tablet, so I was unable to download the ScratchJr app to test it, but judging by the book and my experience with Scratch, I'm sure it's a wonderful tool for inspiring creativity and logical thinking.

Here's what I like about The Official ScratchJr. Book:
If at first there was a great rush to teach kids to code, there is now a push in the opposite direction. Just Google "Should kids learn to code?" and you will find a wealth of opinion on either side. Personally, I liken the "argument" to car repair.  In days gone by, many people knew how to do most repairs on their automobiles.  Now, cars' systems are so intricate, that most people have trouble doing anything other than the simplest of repairs.  Most people have cars.  Should we know how to repair them?  No, I don't think so.  There will also be a need for an auto mechanic. But, knowing how to change a flat tire sure comes in handy!  If working on cars appeals to you, become a mechanic.  The same is true of coding.  Give it a try.  If your kids are looking for a follow up to the Frozen Hour of Code project, "Code with Anna and Elsa," The Official ScratchJr Book is probably a good place to start (if you have a tablet that can run the ScratchJr app).

I'm going to pass my copy along to my school district's media specialist.  The kids have Chromebooks and should be able to make good use of it.


Visit the STEM Friday blog for reviews of more great STEM books for kids and teens.

Watch the Golden Globes last night?  Well, it's award season for books, too!

The big news today for librarians, parents, teachers, and fans of #kidlit, is the announcement of the American Library Association's Youth Media Awards. I'll be driving to work as the live webcast begins, but I'll be checking in as soon as I get to work!

Most people know the Newbery and Caldecott Medal awards, but there are many others.  You can check them out the complete press release here: http://www.ala.org/news/mediapresscenter/presskits/youthmediaawards/alayouthmediaawards

I hope to see a few of my favorites!