As the years go by, I get less and less comfortable choosing “best of” books at year’s end.  There’s no way that I can read all of the deserving books, and what I may find moving or amusing may not resonate with others.  However, with that being said, and in no particular order,

here are my personal favorites of 2014:

The Port Chicago 50 - a review

The Port Chicago 50, as they became known, were a group of African American Navy sailors assigned to load munitions at Port Chicago in California, during WWII.  The sailors' work detail options were limited; the Navy was segregated and Blacks were not permitted to fight at sea. The sailors worked around the clock, racing to load ammunition on ships headed to battle in the Pacific. Sailors had little training and were pressured to load the dangerous cargo as quickly as possible.

After an explosion at the port killed 320 men, injured many others, and obliterated the docks and ships anchored there, many men initially refused to continue working under the same dangerous conditions. In the end, fifty men disobeyed the direct order to return to work. They were tried for mutiny in a case with far-reaching implications.  There was more at stake than the Naval careers of fifty sailors.  At issue were the Navy's (and the country's) policy of segregation, and the racist treatment of the Black sailors.  Years before the Civil Rights movement began, the case of the Port Chicago 50 drew the attention of the NAACP, a young Thurgood Marshall, and First Lady Eleanor Roosevelt.

Through the words of the young sailors, the reader of The Port Chicago 50: Disaster, Mutiny, and the Fight for Civil Rights relives a slice of history as a Black sailor in 1944.

Read an excerpt of The Port Chicago 50 here.
Contains: 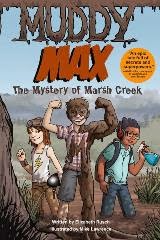 I have been busy lately with review and blogging obligations, as well as work and preparation for the holiday season, but I did take time out to read a copy of Elizabeth Rusch's graphic novel, Muddy Max: The Mystery of Marsh Creek. Thanks to the hard-working intern who brought it to my attention and supplied me with a copy.

Max lives in the aptly-named suburban town of Marsh Creek. In addition to the marsh on the outskirts of town, mud is everywhere in town as well, making it almost impossible for the child of neat-freak parents to stay clean!  Max becomes suspicious of his parents'secretive habits, frequent trips to the marsh, and fanatical obsession with his cleanliness.  When he accidentally discovers that mud gives him superpowers, he and his friend Patrick become determined to figure out exactly what is going on in Marsh Creek.

This is an easy-to-read graphic, sci-fi novel that should be popular with younger kids and reluctant readers. The panels are easy to follow, with simple, but expressive drawings in muted browns and grays that reflect the book's muddy locale. Hopefully, future installments will add some dimension to the Max's female friend. Not willing to completely divest herself of her nonfiction roots, Rusch adds some real science about mud and its denizens in the back matter.

I predict that more than one member of my book club will want to take this one home.  I'll have to place some holds on library copies.

A Teacher's Guide to Muddy Max is available here. 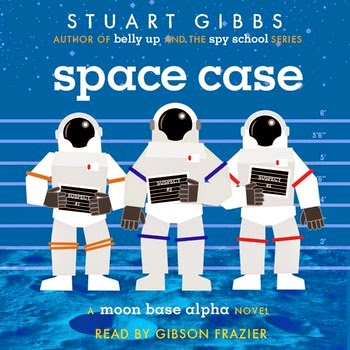 Below is my review of the audiobook Space Case by Stuart Gibbs, read by Gibson Frazier, as it appeared in the December 2014, issue of School Library Journal.  I thoroughly enjoyed it.


Gr 3–7— The year is 2040. Dash, his sister, and their scientist parents are inaugural inhabitants of Moon Base Alpha (MBA), Earth's extraterrestrial colony. Housing only a few dozen people and governed by a strict commander, MBA is not exactly a barrel of laughs for a 12-year-old boy. However, when one of MBA's scientists dies suspiciously and a supply ship brings new residents (including a girl his age), life in space becomes much more intriguing. Though the story has many humorous moments—especially involving the insufferable wealthy space tourists—it also has some plausible science. Each chapter is preceded by a reading from "The Official Residents' Guide to Moon Base Alpha," NASA's part propaganda/part instruction manual, containing such riveting topics as "Exercise" and "Food." Narrator Gibson Frazier keeps the story moving at a good pace, conveying suspense without melodrama. Rather than create pitched character voices, he relies on intonation to differentiate among the large cast. His own voice is deep and clear but boyish enough to suit Dash. The narration flows smoothly, broken only by the humorously intended commercial quality of the "Official Resident's Guide." Space Case should appeal to a broad range of listeners but especially space enthusiasts.

The Terrible Two - a review 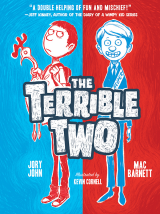 Miles is moving away from his beloved home at the beach to Yawnee Valley, where the slogan is "Come Look at our Cows."  Miles Murphy, the best-known prankster at his old school, will be attending the Yawnee Valley Science and Letters Academy,

Miles awoke with a sense of dread.  He opened his eyes and stared at his blank ceiling.  Last night he'd dreamed it had all been a dream, and now he wished he were still dreaming.
Miles shut his eyes tight.  He tried to fall back asleep, but downstairs he could hear his mother shuffling around the kitchen, preparing breakfast.  Breakfast smelled like eggs. And cows. Although that might have just been the cows.
Miles ate his eggs.  They tasted like dread, although that might've just been the dread.


When he's paired up with the insufferable school helper, Niles Sparks, Miles thinks things can't get worse, but they do. Someone else in school is a prankster, and whoever it is, he's outpranking Miles.

What's the best part about pulling a great prank?  Getting away with it, or getting credit for it?  Miles is about to find out!

This illustrated novel is the first in a series that's sure to appeal to middle-grade jokers and pranksters.  The writing style is conversationally funny with great black-and-white illustrations that add to the humor, A goofy, cud-chewing cow with a bell stands in a pasture adorning half of page one, which reads,

Welcome to Yawnee Valley, an idyllic place with rolling green hills that slope down to creeks, and cows as far as the eye can see. There's one now.

The Terrible Two has more than just humor. There are some intricate pranks woven into the plot, and there are well-developed characters in Miles, Niles, and Principal Barkin - all of whom are sure to reappear in future installments. It's got more text and fewer illustrations, but this series should be popular with Diary of a Wimpy Kid fans.


Note:
I have to add that this book had the best Advance Reader Copy promotion ever!  I was totally pranked!  I received a large box in the mail marked "Perishable."  Inside was the big milk carton, and inside the milk carton was my copy of The Terrible Two, a coffee cup featuring cartoon images of the authors, and a signed certificate from The International Order of Disorder proclaiming the holder to be "a distinguished member of the International Order of Disorder."  I will raffle this off to the members of my book club.  Someone is going to be as happy as a cow in a cornfield! 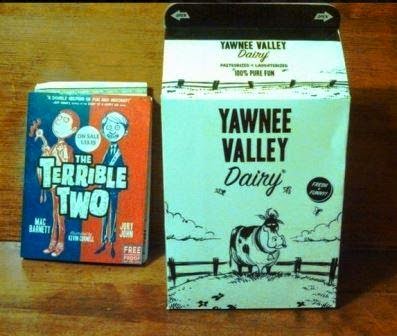 Advance Reader Copy supplied (with coffee cup and milk carton) by the publisher.
- December 03, 2014 No comments: