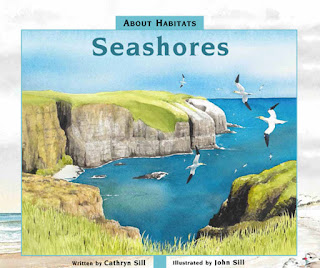 Approximately 40% of U.S. residents live near the coast, yet there is a dearth of nonfiction titles for very young readers on the topic.  Seashores fills this gap with beautiful, painted illustrations by wildlife artist, John Sill.  The illustrations are reminiscent of Audubon's style. Cathryn Sill offers very simple observations,

Plants have to be tough to live in the salty spray, strong winds, and hot sunshine at seashores.

Each sentence is in a large simple font on a white background.  The accompanying illustration is on the facing page.  In a nod to all types of seashores, there are depictions of muddy flats, rocky cliffs, palm-ringed beaches, and beaches from across the globe.  Wildlife and bird life are accurately represented in each location.

There is only one sentence or thought per page, however, for older readers, a note at the bottom offers the title and plate number of the illustration.  The author's Afterword lists each plate number with a small representation of the illustration and a paragraph that more fully describes the scene.  For the quote above, the description reads,

Many seashore plants grow close to the ground for protection from the wind.  Others have thick and waxy leaves that make it easier to store water.  Some have leaves covered with tiny hairs that protect the plant from the heat.  Pink Sand Verbenas have thick, water-storing leaves.  They live in sandy soil along the western coast of North America.

A Glossary and Bibliography complete the book.  The suggested age range for About Habitats: Seashores is from 3-7.  This is a lovely, educational book that will appeal to shore dwellers and mid-staters alike.


A Teacher's Guide for the About Habitats series is available here.


My copy of Seashores was provided by Peachtree Publishers.  It will be on a shelf near you in August.
- July 21, 2017 5 comments:

I don't know how I've missed this news, but Wonderstruck by Brian Selznick (Scholastic, 2011) is going to be a movie this fall!

You can read by review of Wonderstruck the book and watch a video with author Brian Selznick here.  [http://shelf-employed.blogspot.com/2011/09/wonderstruck-review.html]

I do hope they do a good job of it!

A Fugitive in Walden Woods - a review 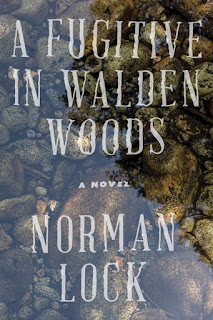 
A Fugitive in Walden Woods is historical fiction, a revisionist history featuring some of the greatest American minds of 1845. The book is part of The American Novels series.

At the cost of his shackled hand, the enslaved Samuel Long escapes via the Underground Railroad to relative freedom in Massachusetts. His benefactor, Ralph Waldo Emerson, gives him a job of sorts—monitoring the well-being of Emerson’s friend, Henry David Thoreau, who is in the midst of his famous sojourn in Walden Woods. In the occasional company of these men, Samuel becomes acquainted with Nathaniel Hawthorne, Louisa May Alcott, William Lloyd Garrison, and other Transcendentalists. A Fugitive in Walden Woods is Samuel Long’s memoir of his year in Walden Woods, written through the lens of his later experiences.

So thoroughly does Lock set the mood that it is impossible to tell which words of Thoreau, Emerson, and Hawthorne are ones actually spoken or ones created by Lock. Though these men pondered the great questions of their age (and our own), the insertion of Samuel into the story, forces a more practical rendering of their great ideals.

"Emerson had asked me what it meant to be human. I should have told him that a person cannot be human if his life is perpetually in the grip of terror and uncertainty. Just as cities are built by people unafraid of marauding barbarians and the caprices of a hostile universe, so will we become human when we no longer live in fear for our lives."


A Fugitive in Walden Woods does not shrink from the difficult questions of our time, including racism. It succeeds in its goal of nudging us to become deeper thinkers.

"It is easy to misjudge others—a commonplace remark, but nonetheless true. We close our minds to the completeness of others, striking from the portraits we draw of them in our imaginations all contradiction."

Download a Reading Group Guide for A Fugitive in Walden Woods here.

My copy of A Fugitive in Walden Woods was provided by LibraryThing Early Reviewers.
- July 01, 2017 No comments: