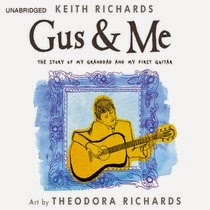 Richards, Keith. 2014. Gus & Me: The Story of my Granddad and my First Guitar. Hachette Audio.

Keith Richards, the rough-edged, raspy-voiced, Rolling Stones guitarist, is hardly the man that comes to mind for a picture book writer and narrator, but then again, who better to tell the story of his first guitar?

Richards wins the listener over immediately with his folksy, working class Estuary English accent (think dropped h's and "intrusive" r's) and unmistakable fondness for his topics - his first guitar and his beloved Granddad, Gus. It was the musically talented Gus who introduced a young Keith Richards to the guitar, teaching him how to 'old it, and suggesting the classical Malagueña(r) as the pinnacle of guitar mastery.

I have yet to see the print version of this story, but I don't believe it could surpass the audio book.  A story with music at its heart needs music to be understood. Richards plays bits from Malagueña in appropriate spots throughout the story, and during a visit to a music shop in London, we hear Steve Jordan on drums.  Once, the listener even hears a little chuckle - not musical, but surprisingly sincere.  Richards collaborated with other authors, but this is obviously his story, and he delights in telling it.

My review of Gus & Me for AudioFile Magazine appears here with a small excerpt.  Take a listen!

Visit the Nonfiction Monday Blog, "rounding up the best nonfiction for children and teens."

In the seemingly idyllic, 1950s, town of Downers Grove, Illinois, handsome and popular 12-year-old Tommy Roberts appears to be a typical kid.  He lives with his parents, older sister Mary Lou, younger sisters Pinky and Susie, and a devoted family dog. He and his older sister attend Catholic school, his father works for Western Electric, and his mother stays at home with the younger girls.

Amidst the backdrop of the Red Scare and McCarthyism, Tommy's discovery of a Communist newspaper in the town's paper drive truck, and a horrific burn accident to Mary Lou, begin a chain of events that uncovers secrets, truths, and lies in his small town populated with many Eastern European immigrants.

Perhaps the biggest lie is Tommy's own life.  Though he never gets caught, Tommy is a bully, picking on kids at school, especially Little Skinny. When he plants the Communist newspaper in a store owned by Little Skinny's immigrant father, he's gone too far - and he knows it.  Now it's time to act like his cowboy hero, The Lone Ranger, and make everything right, but where can he turn for help?  His mother is "moody" and beats him relentlessly while his father turns a blind eye. His older sister will be hospitalized for months. He has his chores and schoolwork to do, and Mary Lou's paper route, and if Mom's in a mood, he's caretaker for Pinky and Susie as well.

It's hard to understand a bully, even harder to like one, but readers will come to understand Tommy and root for redemption for him and his family.  He will find help where he least expects it.

I couldn't tell Mrs. Glazov about the dinner party. Or planting the paper.  But maybe I could tell her about taking the candy.  Maybe that would help.  "There's this boy at school, I said slowly, "Little Skinny."
.....
"I didn't like him.  I don't like him.  Sometimes, Eddie and I and the choirboys, we tease him."
"Ahh," she said again.  "He laugh too?"
I shook my head.  I knew what Mary Lou would say.  Shame on you, Tommy! Picking on that poor boy.  And now she would have scars just like him.  How would I feel if someone picked on her?
"What did you do?" Mrs. Glazov asked, her voice soft, like a priest at confession.  It surprised me. I'd never heard her sound so gentle.
"I took some candy from him," I admitted.
"You stole it."
I shrugged.
"Ahh."
"It's not my fault! If Mary Lou had been there, I never would have done it!"
Mrs. Glazov laughed.  "You don't need sister.  You need conscience."
I had the horrible feeling that she was right.  I wasn't a cowboy at all. I was an outlaw.

Author Kristin Levine gives credit to her father and many 1950s residents of Downers Grove who shared their personal stories with her for The Paper Cowboy. Armed with their honesty and openness, she has crafted an intensely personal story that accurately reflects the mores of the 1950s.  We seldom have the opportunity (or the desire) to know everything that goes on behind the doors of our neighbors' houses.  Levine opens the doors of Downers Grove to reveal alcoholism, mental illness, abuse, disease, sorrow, and loneliness. It is this stark realism that makes the conclusion so satisfying.  This is not a breezy read with a tidy and miraculous wrap-up.  It is instead, a tribute to community, to ordinary people faced with extraordinary problems, to the human ability to survive and overcome and change.

Give this book to your good readers - the ones who want a book to stay with them a while after they've finished it.

I'm back from vacation and have some catching up to do!  If you're a frequent reader, you'll know that I review books for AudioFile Magazine.  Once submitted, I cannot reprint my reviews here, but I can offer a quick rundown, and link to the reviews as they appeared for AudioFile. 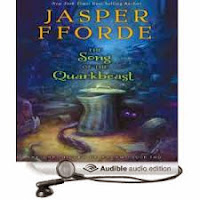 I am smitten with the unflappable Jennifer Strange, protagonist of Jasper Fforde's Chronicles of Kazam series. I recently reviewed the second book in the series, The Song of the Quarkbeast. A quirky, funny, and smartly-written fantasy series.  Book 3, The Eye of Zoltar just published last month, so get reading!  Read my review of The Song of the Quarkbeast here.  Suggested for ages 10-14. (I think older readers may enjoy it as well.) 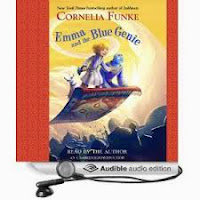 I love Cornelia Funke's dark fantasy titles.  The Inkheart trilogy is a favorite series, and I thoroughly enjoyed Reckless, the first in the Mirrorworld series. I was thrilled when offered an opportunity to review her new early chapter book fantasy, Emma and the Blue Genie, especially when I discovered that she is the narrator.  My review of Emma and the Blue Genie is here.  Suggested for ages 7-10.
(I only reviewed the audio copy, but the print copy is lovely - small and special and delightfully illustrated)