My Brigadista Year - an audiobook review 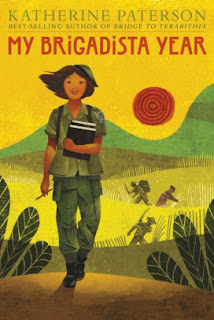 In 1961, following the Cuban Revolution, Cuba was largely populated by illiterate, rural farmers. Whatever may be your thoughts on Fidel Castro and the often brutal results of the revolution, it is difficult to be unimpressed by Castro's Literacy Campaign, one of his first initiatives. Using hundreds of thousands of young volunteers, he embarked on a one-year plan to bring literacy to the entire country.  Most of the volunteers were young, teenage girls from Havana and other large cities, who traveled to rural areas to live and work with farming families by day, and educate them by night. Amazingly, he succeeded. My Brigadista Year is a fictionalized, epistolary account of one volunteer.

Note: The current literacy rate in Cuba is 99.8%, according to the CIA World Factbook, and Cuba continues to have one of the highest literacy rates in the world. Reliable, current statistics on the US literacy rates are not readily available.

My copy of My Brigadista Year was provided by AudioFile Magazine. *Edited to add video(oops).
- November 30, 2017 No comments: 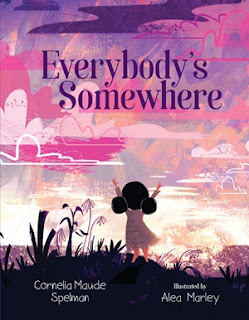 Everybody's Somewhere is a rhyming concept book that explores a sense of self and place. Global in scope and culture, the cheerful artwork in bright but softly muted tones,shows a wide variety of children and adults from a wide variety of settings and locations—a city, a farm, a person in a wheelchair, campers, a soldier, and more.


Each of us is somewhere
Here or there.

Each of us is someone
In our own somewhere.


This is a fine choice for storytime. (Read it first so as not to stumble over the rhyme.)


My copy of Everybody's Somewhere was provided by the publisher at my request.  It will be donated to the preschool where I read it this morning. The teacher was quite taken with it and loved the illustrations. 😊 The kids enjoyed it, too! 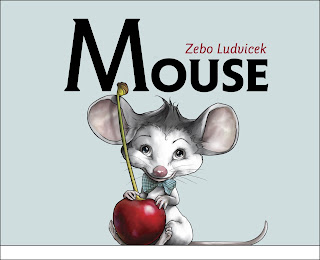 A mouse with a cherry meets the letter M.


Sadly for the mouse, the M's bite is rather large, and the mouse is left without a cherry.  The kindly M feels remorse and offers himself as a snack for the hungry mouse.  Mouse nibbles so much, that M, is soon an N.  And when Mouse sleepily climbs upon the N for naptime,  N tips over and becomes a Z.   And so it goes.  M transforms into several letters as the two become friends over their shared experiences and Mouse attempts to return his new friend to his original state.

Author and illustrator, Zebo Ludvicek, makes impressive use of white space and a minimal color palette to highlight the very expressive Mouse and his transformational letter friend.  Mouse's dialogue is in red italicized typeface; M is actually a part of his dialogue, complete with eyes, eyebrows, and mouth.  Some illustrations are double-spreads, but it is the large, single-page images of the mutually adoring friends that will win your heart.

Although the specified age range for this book is 3–5, I read this book to a group of first graders before their lunch.  (Older children often get so much more out of picture books.) After lunch, several of the kids clamored for me to read it again!


Look for Mouse on a shelf near you in a few days.

My Advance Reader Copy was provided by the publisher at my request.

Note: See if you can read this book without thinking of The Little Mouse, The Red Ripe Strawberry, and the Big Hungry Bear by Don and Audrey Wood. Both mice are so winsome, yet fiercely protective of their fruit! 😊
- November 18, 2017 No comments: 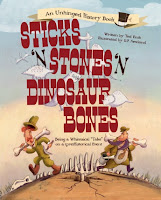 Welcome to Day #5 of the Sticks ‘n’ Stones Blog Tour

This first book in Ted Enik and G.F Newland's "Unhinged History" series is a ripping yarn - full of adventure and deceit - that brings to life the best-known public spat in all of paleontology: the bitter rivalry between Edward Drinker Cope and Othniel Charles Marsh that became known as "The Bone Wars." Lively and witty rhymes plus beautifully demented illustrations by Newland reveal how the paleontologists' infamous rivalry began and how their mutual obsession with outdoing and ruining one another spun out of control.

Here's my takeaway on the book:

Stick 'n' Stones 'n' Dinosaur Bones is what I usually characterize as a picture book for older readers.  This one is unique in that it can appeal on several levels.  It's Seussian, sing-song nature and humorous illustrations will entertain even children too young to understand the book's overall concept.  It will attract kids interested in paleontology—and aren't all kids interested in paleontology at some point? And finally, it's useful in introducing the subject of information literacy.

The crazy one-upmanship and outright lies of Edward Drinker Cope and Othniel Charles Marsh may be fodder for laughs and entertainment, but it's useful to point out that belief in outlandish claims is nothing new in American history.  One need only look to today's internet, television, and newspaper articles to see rampant and competing claims of "fake news!"  What's an educated news consumer to believe?

Sticks 'n' Stones 'n' Dinosaur Bones can be an educational or cautionary tale about the need to investigate news sources and shun sensationalism.  Remember, the "Bone Wars" was not the only time that a gullible populace has fallen for exaggerated, overblown, or downright false claims. Jim Murphy's book, The Giant and how he Humbugged America (Scholastic, 2012) and Candace Fleming's The Great and Only Barnum: The Tremendous, Stupendous Life of Showman P. T. Barnum (Schwartz & Wade, 2009), are two stellar books for older readers that spotlight the gullibility of the general public and the great lengths that people will take to exploit it.

I can't wait to see what topic will be tackled next in the "Unhinged History" series.


From the publisher:
About the Author
Ted Enik has worked as an illustrator for most of the well-known New York publishing houses, applying his versatility to both original art as well as classic and current children’s book characters, including the Magic School Bus, the Eloise books, and the popular “Fancy Nancy I Can Read” series. This is the first picture book Ted has authored. It was first published in 2013 by Pixel Mouse House, New York, and honored as a Finalist in the American Book Fest’s 2014 Best Children’s Nonfiction and a Finalist in American Book Fest’s 2014 International Book Award for Best Children’s Nonfiction. Learn more about his books at unhingedhistory.com and his illustration at tedenik.com.
About the Illustrator
G.F. Newland is a part-time illustrator and the systems administrator at the School of Visual Arts, New York, NY. His doodles have found their way onto buttons, bags, posters, and T-shirts, and have been published by Scholastic, Hachette, and Pixel Mouse House. He lives in Brooklyn with his wife and a pet fish named Enki. Visit his website at gfnewland.com.

My copy of Sticks 'n' Stones 'n' Dinosaur Bones was provided by the publisher.

Note: This book trailer was created by a previous publisher.
- November 11, 2017 5 comments:

Email ThisBlogThis!Share to TwitterShare to FacebookShare to Pinterest
Labels: based on a true story, dinosaurs, picture books for older readers, rhyming, science, scientists

They Didn't Teach This in Worm School - a review

They Didn't Teach This in Worm School! : One Worm's Tale of Survival
by Simone Lia 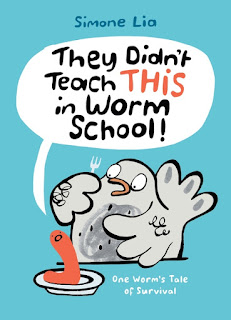 The publisher's description accurately captures the spirit of this book.


A hungry chicken (who thinks he’s a flamingo) and a quick-thinking worm set off on a madcap adventure — and forge an unlikely friendship.


Published first in the UK, it has a definite feel of British humor, which I enjoy.  I often think that we, as Americans, take ourselves too seriously.  Canadians and Brits definitely have a quirkier funny bone, and it is on full display in They Didn't Teach This in Worm School.  When Marcus and Laurence set off on their adventure, the goal is to find Africa so that Laurence can unite with his "fellow" flamingos.  Along the way, they become convinced that they've found France because of the many "Eiffel Towers" that they encounter.
Marcus and Laurence take this all in stride, even the fact that no one in "France" seems to speak French.  Things go poorly and, aided by some local worms, they narrowly escape with their lives, prompting Marcus to remark,

I was really glad to have met these French worms.
They were really kind and helpful.
I liked them, even though they were weirdos.

Their adventures continue in a similar zany vein until eventually, all is sorted out, and the two have become fast friends despite their disparate interests.

My Advance Reader Copy was of one color, but the finished book with have two-color illustrations like this sample page: 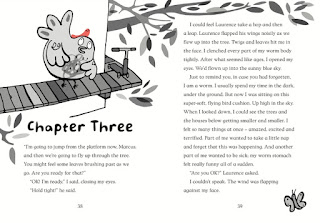 Every page is illustrated to some degree, and there are occasional double-spread images throughout. Simone Lia's illustrations bear some resemblance to those of Sara Varon, but have more straight-up humor and none of Varos' pathos.

They Didn't Teach This in Worm School is a perfect choice for readers with a quirky sense of humor who won't mind a rather heavy-handed dose of ethics on the friendship front.

Look for this on a shelf near you in February, or pre-order it now.


My copy of They Didn't Teach This in Worm School was provided by LibraryThing's Early Reviewers.
- November 03, 2017 2 comments: