Picture Book Roundup - Una princesa, bears with cares, and a wolf who despairs

Picture Book Roundup - Una princesa, bears with cares, and a wolf who despairs

It's been a while since I've done a picture book roundup.  Here are a few newly or soon-to-be-published favorites. 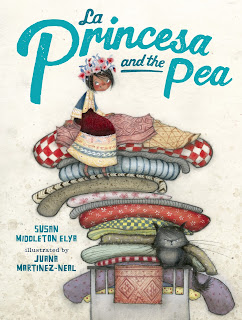 
The highly successful duo of Susan Middleton Elya and Juana Martinez-Neal (La Madre Goose: Nursery Rhymes for Los Niños) has teamed up again for another re-working of a classic children's story.  In La Princesa and the Pea, Martinez-Neal uses acrylics, colored pencils and graphite on handmade paper to create Peruvian-inspired illustrations that burst with expression and humor, yet have an air of gentle softness and beauty.  It's a fine mix.  The rhyming text is sprinkled with Spanish words and phrases highlighted in red text.  A group of "strong workers," (which includes a girl and two small kids! 😃) stacks veinte mattresses while the queen munches  from her box of bombones.

The queen ate her treats.  The bed was stacked high, and right when they finished, la niña came by.

It would be a wonderful story even without the surprise ending! Great bilingual fun with many humorous illustrated details to find.

A Glossary and A Note from the Illustrator are included.  Helpfully, the Glossary appears in the front!

Full disclosure: This was my favorite fairytale as a child. 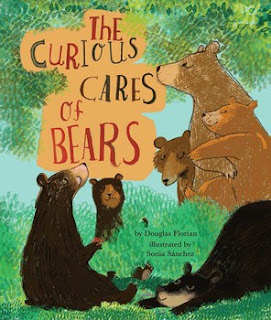 I've long been a fan of Douglas Florian.  His books are poetic and nature-inspired.  His books on the four seasons (Autumblings, Winter Eyes, Summersaults, Handsprings) are favorites of mine, as is Comets, Stars, the Moon, and Mars.

The Curious Cares of Bears is a fanciful look at a year in the lives of bears.  Each double-spread illustration contains a short, rhyming explanation of the season's activity.

Some, like the one above, are mostly accurate (although I'm not sure a full-sized bear would venture out on the comically thin branch!).  Other activities are pure fancy,


In autumn there's playing in leaves all day long,
then building a campfire and sharing a song.

The illustrations are mixed media that appear to be a combination of charcoal sketches, simple brushwork, and digital enhancements.  The bears and their environs are portrayed simply with a measure of whimsy, and a reverence for nature. The combination of crafted rhyming and delightfully simple illustrations is beary likeable. 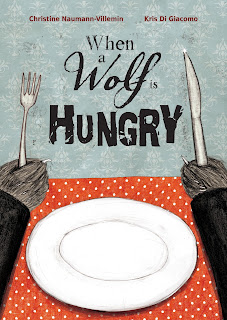 When a Wolf is Hungry
by Christine Naumann-Villemin
Ill. by Kris Di Giacomo
Eerdmans Books for Young Readers, 2017


A hungry wolf decides that he has a hankering for a rabbit,


Not just any ordinary cottontail, though. What he craved was a grain-fed, silky-haired rabbit, one with just a hint of sweetness.  A city bunny.

So with knife in paw, Edmond Bigsnout heads to the city to find his rabbit. As it turns out, the perfect rabbit lives on the 5th floor of an apartment building.  Every time that Edmond gets close to the apartment, a friendly neighbor appears and begs to borrow Edmond's instrument of death - knife, chainsaw, rope. The story is full of rich and language and dialogue,


"Delighted to meet you.  Oh, look, you have some rope! Any chance I could have it? This great big package is such a nuisance."
Drat!
"I suppose so," sighed the wolf.
The skunk was so pleased that he let out a little air.


Why do the neighbors need these items and where is Max Omatose, miniature rabbit?

A humorous ending will make everyone happy—perhaps there is something wonderful about living in a big city neighborhood. The double-spread illustrations in this generously-sized book are comically suspenseful.  Edmond rides a bicycle while wearing a black suit and bow tie. A middle-aged cow in a flowered dress and pearls eyes Edmond's pot hopefully.  A beautiful neighbor wolf, Miss Eyestopper, is straight out of film noir.

When a Wolf is Hungry is a perfect book for sharing with slightly older kids. I'd take this one on a school visit any day.

My review copies of La Princesa and the Pea and The Curious Cares of Bears were provided by the publishers at my request. My copy of When a Wolf is Hungry was obtained through LibraryThing's Early Reviewer program.
- August 26, 2017 No comments:

In the Shadow of the Sun - a review 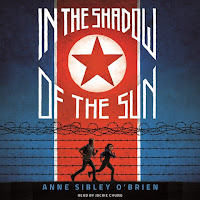 In the Shadow of the Sun (audiobook)
by Anne Sibley O'Brien, read by Jackie Chung
Scholastic Audiobooks

North Korea, the Democratic People's Republic of Korea (DPRK), has been in our news feeds much too often lately for all the wrong reasons.  We hear much about the country's leader and its nuclear capabilities, however, we know very little about daily life in the closed, dictatorial nation.

Anne Sibley O'Brien has lived in South Korea, speaks Korean, and has done extensive research to create this middle-grade thriller about two siblings who are attempting to escape the country after their father, a humanitarian volunteer, has been seized by the police.  Mia is an adopted Korean girl and has little in common with her tall, blond, blue-eyed brother.  But while she may be a minority in her Connecticut hometown, her appearance will prove to be an asset in Korea.

In the Shadow of the Sun could not be a more timely book, and it should appeal to readers of many genres.  It features family dynamics, sibling rivalry, travel, adventure, thrills, mystery, identity politics.  It's relatively short, just under 9 hours and worth your time.

Note:
The audio snippet provided by the publisher on AudioFile Magazine's site, is from the author's foreword—not from the contents of the books itself, which is read by Jackie Chung.  The author's foreword and notes are well worth a listen, however.  It's clear that she is very passionate about depicting North Korean life as accurately as possible.

For more information:
Link to the CIA's The World Factbook page on the DPRK.

Fault Lines in the Constitution - a review 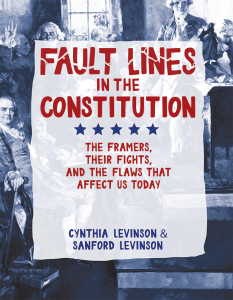 Fault Lines in the Constitution: The Framers, Their Fights, and the Flaws that Affect us Today
by Cynthia Levinson and Sanford Levinson
Peachtree 2017

Most Americans of all political stripes revere our Constitution and the far-reaching genius of the men who drafted it. With the glaring exception of their failure to do away with the heinous institution of slavery, the framers did a remarkable job of creating the rules for a new government.  But are those rules of government still serving us adequately today, or are they aiding the gridlock that we now see in all three branches of government?

Whether you agree with the arguments posited by the authors or not (for the record, I think that they make some very salient points), Fault Lines in the Constitution, can serve as a primer on some of today's most pressing political arguments, and as a jumping off point for classroom discussions.


Are we still in the process of creating a more perfect Union?

Fault Lines content includes illustrations, timeline, bibliography, introduction, and parts with titles that reflect current concerns such as, "How Bills Become (Or, More Likely, Don't Become) Law," and "If America Threw a Party, Would You Be Let In?"

Another review of Fault Lines in the Constitution:


Read a copy of The Constitution of the United States here.


Note:
My copy of Fault Lines in the Constitution is an Advance Reader Copy provided by the publisher at my request. The final version will likely be updated to reflect recent changes adopted by the Senate regarding filibusters.
- August 08, 2017 No comments: 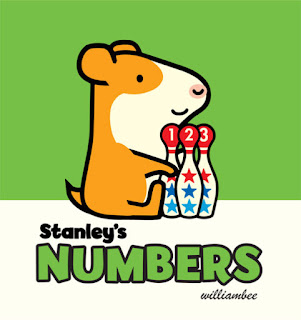 Let me just say that I continue to be a fan of Stanley books by William Bee.  The latest are Stanley's Opposites and Stanley's Numbers from Peachtree (2017).  You'll find these on a shelf near you this fall.

These colorful books are everything one wants in a board book—bright colors, simplicity, simple concepts, minimal text. 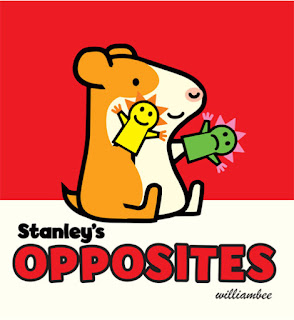 If you're interested, Stanley has a new fan page.

You can read my other reviews of Stanley books here:


Thanks to Peachtree Publishers for my review copies.  I'm passing them along to tiny relatives ASAP.😃
- August 04, 2017 No comments: 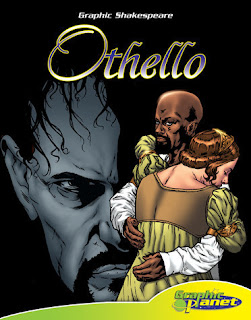 I was working on a collection development project and picked up this copy of Othello from my library in search of a good graphic Shakespeare.  If you have any suggestions, please feel free to share them!

A fair introduction to a Shakespearean classic. The back matter includes a glossary, as well as notes on the play, Shakespeare, and the graphic novel adapters. This information would have been more useful as an introduction, as the first act is difficult to follow if the reader is not already familiar with the play.The dialogue retains a Shakespearean flavor, and it should be noted that not all unfamiliar words appear in the glossary. (I had to look up "bawn" in an online dictionary.)

The illustrated characters, besides Desdemona, have a dark and serious cast befitting this tragic play. Scenes featuring Desdemona offer the only break from the furtive treachery talking place in dark corners.The oversized dialogue bubbles, rather than the illustrations, often drive the story.
Othello is part of the Graphic Shakespeare series by Graphic Planet.

For young kids, I absolutely LOVE First Second's Stratford Zoo Midnight Review presents Macbeth.  (There's a "Romeo and Juliet" too, and I hope more to follow) My review is linked above.
- August 02, 2017 No comments: