I’ve listened to several audiobooks lately, and haven’t had time to post anything about them. A quick rundown: 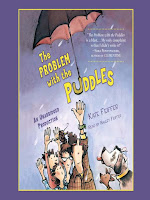 The Problem with the Puddles
By Kate Feiffer, read by Halley Feiffer, published by Listening Library
About 3 hours.

The problem with the Puddles?  Well, the Puddles actually have a host of problems.  To begin with, Mr. and Mrs. Puddle disagree - a lot!  For that reason, Baby, which is the name the exasperated hospital nurse finally wrote on the birth certificate when the Puddle parents failed to agree on any other, is called Ferdinanda by her father and Emily by her mother. Her brother, Tom, was somehow more fortunate. The Puddles' dogs, a miniature Chihuahua and a Great Dane are, (due to another disagreement) each named Sally - the Sallys or Sally squared, for short.

The Puddle parents, however, "agree to disagree" (the title, BTW, of Mrs. Puddle's bestselling book!), and disagreements are not their current problem. Sally squared is the problem. In leaving their country house for a trip to their city house, they have accidentally left the Sallys behind!  While debating whether to go on or go back, the family car breaks down; in attempting to flag down a passing motorist, they are mistaken for a modern dance troupe, the Dancing Puddles.  Meanwhile, the Sallys have struck out on their own for the city. A hilarious set of circumstances ensues.

The story alternates in perspective, with chapters switching between the escapades of the devoted Sallys and the dithering Puddles.  The writing is funny and unique.  The Puddles are unforgettable. Great in audio format, but likely even funnier in print due to the illustrations!

This book is a quirky winner for chapter book readers! 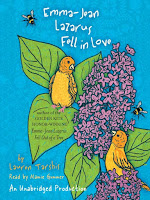 This review refers to the audio book read by Mamie Gummer. Not having read the first Emma-Jean Lazarus book, I didn't quite understand Emma-Jean's precise, peculiar, stilted, and clipped manner of speaking. (truthfully, I still don't) Early in the book, I assumed that the protagonist's precise mannerisms would annoy me; however, as the story progressed - a story of first loves, friendship, misunderstandings, and a loving home, I became connected to, and charmed by the characters. Although the foreshadowing was a bit obvious for a book aimed at grades 5-7, the sum of all its parts was much greater than I anticipated. Emma-Jean Lazarus Fell in Love is a positive and heartwarming story with a touch of humor. 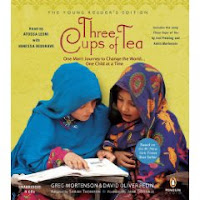 Three Cups of Tea: One Man's Journey to Change the World...One Child at a Time
By Greg Mortenson, read by Atossa Leoni, foreword by Vanessa Redgrave, published by Penguin Audio.
(nonfiction) About 4 hours.

This is the children’s version of the inspiring adult book by the same name, and recounts Greg Mortenson’s quest to provide schools for poor children in Pakistan and Afghanistan. Atossa Leoni’s accented voice is perfect for this story, adding a subtle reminder that the story takes place far from the comforts of the United States. An inspirational, original song follows the reading of the book. Greg Mortenson’s story is inspiring and uplifting, but I doubt it is one that most children will read willingly. However, I would certainly not hesitate to recommend it.

The Three Documents That Made America: The Declaration of Independence (1776), The Constitution of the United States of America (1787), The Bill of Rights and Other Amendments (1791)
By Terry Bregy, read by Sam Fink, published by Audio Bookshelf, LLC 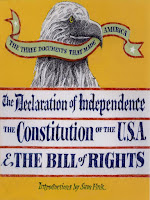 I don't know what possessed me to listen to this one, (other than my history geekiness!), but I have to admit that I didn't get through it to the end.  The audiobook contains interesting background information on each document and a reading of each.  The Declaration of Independence was captivating enough, but even the best reader can't liven up the Constitution.  I almost nodded off in the car while listening to it. Still, it's a useful title for teachers or taken in small doses.  Every child should know more of the documents that make our country unique.
- November 25, 2009 No comments:

At My Library Creative Essay Contest | At Your Library

Enter the @ My Library Creative Essay Contest by December 7, 2009. 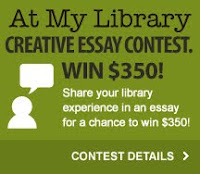 Email ThisBlogThis!Share to TwitterShare to FacebookShare to Pinterest
Labels: contest 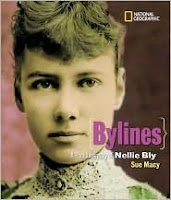 The fascinating story of the pioneering, Nellie Bly. A woman in a man's world, she was a globetrotting reporter, breaking new ground in travel (she rounded the globe in 72 days!), reporting (she went undercover in an insane asylum for 10 harrowing days!), and social mores (she worked in a man's profession, supported herself handsomely, married a man many years her senior, and ran her own company!) She was a world-wide phenomenon, the likes of which we don't see anymore.

Suggested for ages 10 and up, even adults will enjoy this one! A captivating story about a remarkable woman.
- November 19, 2009 No comments:

Murphy, Jim. 2009. Truce. New York: Scholastic.
"[I]f I had my way, some person in authority would proclaim that Christmas will not be celebrated this year....Enemy, Death, and a Christmas tree - they cannot live so close together." German Captain Rudolf Binding (from Truce)

Jim Murphy's Truce, tells the remarkable true story of the spontaneous truces that broke out all along the entrenched battle lines of Europe in December, 1914. It is estimated that tens of thousands of British, German and Belgian soldiers took part in the cease-fires that lasted, in some instances, for several weeks. More than a cessation of hostilities, the hiatus was almost joyful as soldiers fraternized with each other - singing, exchanging gifts, and taking photos.

In six chapters, Murphy provides ample background information to give meaning and context to the remarkable occurrence of the many spontaneous truces and celebrations. One chapter recounts enemy soldiers praying together, translating the sermon from English to German, and burying their dead in solemn ceremonies. In another instance, German and British soldiers sing Christmas carols, alternating verses, one in English, one in German, and then joining in Latin to sing Adeste Fideles.

The truces ended, not because the men desired to resume fighting, but rather, because they could no longer hold out against the will of their commanders.

The German High Command ... issued a terse order: "Commander Second Army directs that informal understandings with enemy are to cease. Officers ...allowing them are to be brought before a court-martial." In some areas, these orders had immediate results. British private Bernard Brookes was standing guard at midnight on December 25 when "our artillery sent over ... four shells of small caliber to let them know that the truce, at which the whole world would wonder, was ended, and it its place, Death and Bloodshed would once again reign supreme." The Germans countered with an artillery barrage of their own.

The award-winning, Murphy, has meticulously researched his topic, and includes a Timeline, Notes and Sources, More about World War I, an Index, and a wealth of photographs, maps, period art and newspapers. The Epilogue, while factual, is more editorial than informational in nature.

The text is large and sepia-toned, to match the many accompanying photographs. Photographs of the desolate and razor-wired No Man's Land and the hideous trench conditions offer a stark contrast to those of smiling enemy soldiers posing for posterity.

To read this story in the men's' own words, is both compelling and thought-provoking. Readers will not come away unaffected.

...and here's a video booktalk for the same title, The Magician's Elephant.

A podcast booktalk for one of my new favorites! 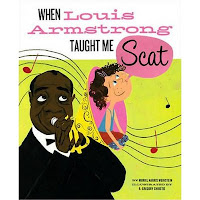 Today my library was fortunate to host award-winning illustrator, R. Gregory Christie. He is a three-time Coretta Scott King Honor Award recipient, the winner of the Schneider Family Book Award, and a Theodore Geisel Honor Award recipient. He has also received several awards from the New York Times. (complete information is available on his website)

He spoke to a group of 5th grade students about art, history, technique, research, publishing, and inspiration. He politely (and sometimes humorously) accepted all questions, even divulging the source of the initial in his name, R. Gregory Christie. (I won't tell!) The kids adored his easy-going manner and good nature. They were entertained, engaged, and inspired. He is a talented, warm, friendly, and positive role model for children.

My Sister, Alicia May

My Sister, Alicia May is a beautifully realistic story of a young girl whose sister has Down Syndrome. Sharing both the good,

"She watches ladybugs warm themselves on our red door. Then she counts their dots: 'One lady dot, two lady dot, three lady dot,...' I think God is glad someone notices these things,"

Alicia May's sister recounts life with her sister with touching honesty.
The illustrations by Shennen Bersani have an almost photographic quality, realistically portraying the familiar features of a Down Syndrome child, as well as the typical gap-toothed smile of a young schoolgirl, still waiting for all of her permanent teeth. The touching illustrations are a perfect match for the text. Bersani dedicates the book to her own sister, who has Down Syndrome.

In the end, Alicia May's sister, Rae-Rae, is just as special as Alicia May. A simply beautiful book that will do more to instill a compassion for those with disabilities than any lesson ever will.
- November 12, 2009 1 comment:

With oil paintings that are both realistic and beautiful, Busy Tree informs readers of the many uses for a tree. In first -person rhyme, the "tree" tells of its many denizens,
"This is the spider that lives in my bark, spinning a web from dawn until dark." A simple and powerful introduction to trees.
- November 12, 2009 No comments:

The Last Olympian? Not who you think.
The last book in the series? Not exactly.

Fans of Percy Jackson will likely enjoy this last chapter in the Percy Jackson and the Olympians series, and be glad to read that a continuing series is in the works, a series following the young heroes after Camp Half-Blood.

The Last Olympian is full of non-stop action (and of course, a few jokes), as the fate of the Olympians and indeed, that of the entire mortal world hangs in the balance. Percy’s 16th birthday approaches, along with its mysterious prophecy. The Titans are on the move, and the Olympian gods are divided in their defense. Even the demigods are fractured, with a spy in their midst.

A few surprising twists and the relationship between Percy, Rachel and Annabeth will keep readers guessing until the end. A satisfying conclusion to a great series.