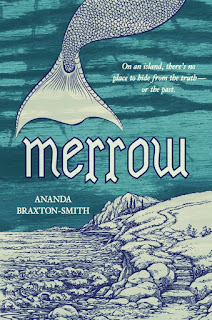 Everything turns into a story the moment it's done. The facts of things do not store well.  They rot and fall apart. But the stories we tell last and even grow.

The Marrey family has long lived on a remote cove on a remote island in a Northern Sea.  Twelve-year-old Neen Marrey has lived there all her life with her sour Auntie Ushag whose appetite for hard work and subsistence living leaves no room for the distant townsfolk's talk of the Others and the Otherwise.  Besides, most of the talk centers on the Marreys anyway, especially since Neen's father drowned and her mam disappeared.  Townsfolk say her mother was a merrow and returned to the sea. Even the Marreys only friends, Ma Slevin and her blind son, Scully, gifted with the Othersight, are filled with stories of the kraken, merrows, water horses, and the like.  And what of Neen herself - afflicted with the Scales?  Could her mother's merrow blood be running in her veins?

"All right?" asked Scully.
"I suppose so," I said.  I wanted to be by myself.  "Thank you."
I couldn't sleep that night.  The sun going down made no difference.  For a long while, there wasn't enough air to breathe.  The weird blood swarmed in my chest, and I longed for morning.  Not only that, the story stuck to every part of me: to my body with its scales, my mind with its waves and silver flashes, and my soul with its homesickness.
Scully Slevin is a true seer, and a honey-tongue with it.  He has a word hoard bigger than any wrecker's haul, and he sees things nobody else does. That needs no proof.  You only have to see him and hear him to know what he says is true.
Proof is for those with no eyes or ears in their heads.

Merrow is a coming-of-age story steeped in old world folklore and swimming in the atmosphere of a bygone time when Old Irish legends still held purchase in the hearts and minds of the island's people. The lines between truth and legend, dreams and reality, Catholicism and Celtic ways, are be blurred in this haunting, wistful story.  Whether it is fanciful or realistic is for the reader to decide.

First published in Australia in 2010, as part of the Secrets of Carrick series, Merrow is coming to the U.S. this fall.

(Advance Reader Copy provided by the publisher at my request)
- May 31, 2016 No comments:

If you are enjoying a respite from work on this Memorial Day, take time to reflect on the history of the holiday. The Library of Congress is a good place to start.  It may be called "Library of Congress," but it is our Congress and our library. It is the largest library in the world with a vast collection of digitized materials.

Begin at their web page Today in History: May 30, where you can see, read, and play (if you are able) the sights, words, and songs of Memorial Days past. The sheet music below is courtesy of Duke University's David M. Rubenstein Rare Book and Manuscript Library, and dates from 1870. 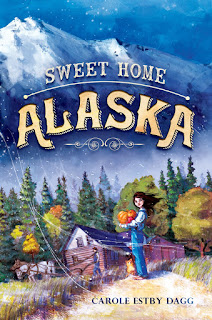 I reviewed Sweet Home Alaska for AudioFile Magazine. It's historical fiction set during the Great Depression with particular interest to librarians. Though the main storyline is a family's struggles to homestead in Alaska, there is a library-related subplot.

In an attempt to create a fledgling library for an impoverished population with scare resources, the protagonist (and later, the entire settlement), struggles with collection development and circulation issues. What should the library acquire and why? How will it be funded? Who will have access and how? Sound familiar? Of course, author Carole Estby Dagg is - you guessed it - a librarian!


Note:
I had a very brief conversation with the author via Twitter here .  Follow the conversation links if you're interested in commentary on Sweet Home Alaska from a Native American's perspective and the author's response.
- May 25, 2016 No comments:

Big Dog and Little Dog Making a Mistake - a review 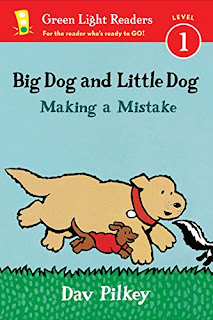 With two dogs and a skunk's tail on the cover, you know how this one is going to end!  Still, Dav Pilkey knows exactly how to engage young readers, and despite the foregone conclusion of two dogs meeting a skunk, Big Dog & Little Dog Making a Mistake is fresh and funny.  I seldom enjoy early readers.  I love this one.   This is a great series.


With Mo Willems' Elephant and Piggie celebrating a great decade with their final installment, The Thank You Book, it's comforting to know that we've still got a great humorist to entertain our littlest readers.
- May 19, 2016 No comments:

The Wild Robot - an audiobook review

The Wild Robot by Peter Brown 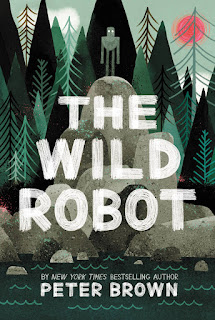 I recently reviewed The Wild Robot for AudioFile Magazine.  You can read my full review and hear an audio excerpt here. [http://www.audiofilemagazine.com/reviews/read/110681/the-wild-robot-by-peter-brown/]

The Wild Robot, a novel for ages 8 and up, is a departure from Peter Brown's usual offering of picture books (Creepy Carrots, Mr. Tiger Goes Wild, My Teacher is a Monster - and more), but his customary excellence is just as apparent.

The link to my review is above, however, I'd like to highlight a few things.  The Wild Robot premise is unique and thought-provoking - a robot designed with AI and programmed for self-preservation and nonviolence, is marooned on an island with animals, but no humans from which to learn.  The narrator, Kate Atwater, does a stellar job (see review) and sounds a bit like Susan Sarandon. The audio book is unique in that the beginning and the closing chapters have sound effects including music and sounds of nature.

Overall, it's very well done!  If you'd prefer to check out the print version, Little Brown Books for Young Readers offers an excerpt of the print version of The Wild Robot here. [http://openbook.hbgusa.com/openbook/9780316382014]
- May 05, 2016 No comments:

Just a reminder that it's Children's Book Week. #cbw16

There are plenty of resources available from the Children's Book Week Digital Toolkit.  I like to order the actual posters, but sadly, I forgot this year.  The good news is that there are plenty of last-minute event kits and activity sheets available for download [http://www.bookweekonline.com/activities].

Also, be sure to download this year's official CBW bookmark with art by Cece Bell. [http://www.bookweekonline.com/bookmark]


You can also add a Twibbon to your Twitter profile pic. (If you don't want it to completely obscure your profile pic, you will have an opportunity to shrink it.) [http://twibbon.com/Support/Children39s-Book-Week]