September, National Library Card Sign-Up Month, is almost over, but if you're still looking for a good book to share, here are two new ones: 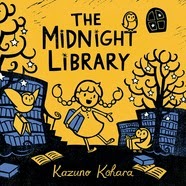 By the time this month is over, I will have visited thirteen kindergarten and four preschool classrooms to promote Library Card Sign-Up Month.

It doesn't matter what other books I have in my bag.  When kids see The Midnight Library, it's the one they want to hear!  Apart from Kazuno Kohara's eye-catching linocut illustrations in three colors, here's why I like it:

I've loved the Bear and Mouse series ever since it came out, and while this one is not my favorite (I still love A Visitor for Bear best!), it's a good addition to your collection of library-themed books.  You really can't go wrong with Bear and Mouse.
- September 25, 2014 No comments:

You can find me goofing around on the ALSC Blog today - having a little fun.
As politics makes for strange bedfellows, Dewey Decimal Classification can make for strange shelf-fellows.
Hop over and take a look.

Oh, and did I mention that I'm a Cybils judge this year for Elementary/Middle Grade Nonfiction? :D 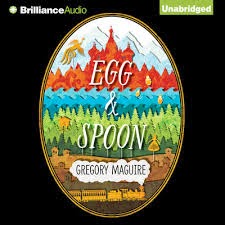 I can save you some time today. If you'd like the short review of Egg & Spoon, click here to read my review for AudioFile Magazine. However, if you want to hear more about this wonderful book, read on!


Can what we want change who we are?
Have patience and you will see.

Set in the tsarist Russia of the late 18th or early 19th century, Egg & Spoon is an enchanting mix of historical fiction and magical folklore, featuring switched and mistaken identities, adventurous quests, the witch Baba Yaga, and of course, an egg.

Narrator Michael Page is at his best as the self-proclaimed “unreliable scribe,” who tells the tale from his tower prison cell, claiming to have seen it all through his one blind eye. In a fashion similar to that of Scheherazade, spinning 1001 "Tales of the Arabian Nights," our narrator weaves fantastical stories together and wraps us in their spell.

Ekaterina and Elena are two young girls - one privileged, one peasant - yet so alike that their very lives can be exchanged. Page creates voices so similar that one can believe the subterfuge, yet the voices are also distinct - a necessity in a book written to respect the reader's (or listener's) ability to discern the flow of conversation without the constant insertion of "he said/she said."

Michael Page is wonderful.  He brings each of author Gregory Maguire's many characters to life with a distinct voice.  He never falls out of character, and his pacing is perfect - measured to keep the listener from being overwhelmed by the story's intricate plot.

If... A Mind-Bending New Way of Looking at Big Ideas and Numbers by David J. Smith. 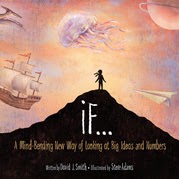 If you're familiar with If the World Were a Village (also from Kids Can Press), then you'll understand the context in which If introduces large concepts. Take "Your Life," for example.

On a two-page spread, a large Sicilian-style pizza is depicted on a table surrounded by several happy children and one salivating dog,


etc., until all twelve slices have been accounted for.

Other concepts featured are:


In each case, care is taken to equate the concept to something with which children will be familiar.   This is a great way to place an intangible concept into a simple object that a child can hold within her hand.

Suggested for grades 3 - 6.  See an interior preview of If at the publisher's website.


Today is STEM Friday.  You can see other posts at the STEM Friday blog.

It's STEM Friday! (STEM is Science, Technology, Engineering, and Mathematics) 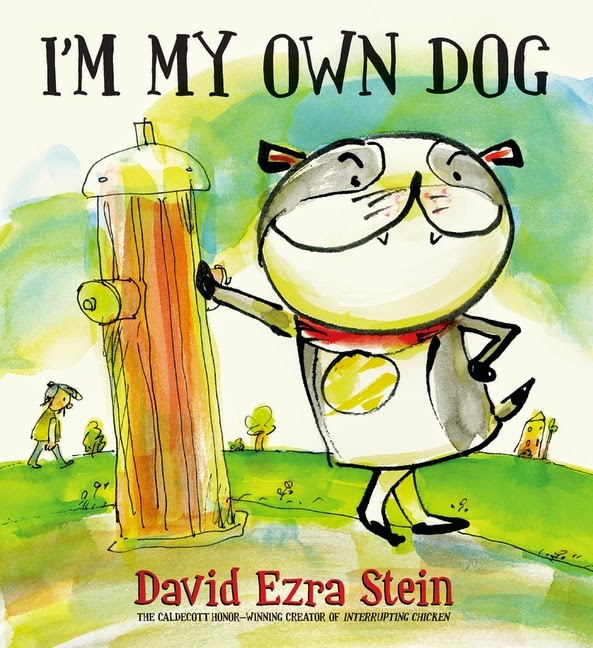 I've got a few deadlines to meet so this will be short, but I couldn't let another day go by without shouting out to the virtual world, "I love this book!"

Funny, inventive, clever and touching, this book will work its way into your heart even as it has you laughing out loud.

This is no ordinary dog.  No one owns him, no sir!

Every morning when I look
in the mirror, I lick my own
face because I am so happy
to see me.
I say, "GOOD DOG.
I AM A GOOD DOG."

You'll think so, too!

Don't just take my word for it.  See more great reviews at


From the end papers,

The illustrations' line work was created using pen as well as a kids' marker hacked to dispense India Ink; it was then photocopied onto watercolor paper.  The painting was done in liquid watercolor, with a hint of crayon on the dog's muzzle.

Ingeniously childish - a perfect presentation of a delightfully independent dog with a soft spot as big as his heart.

Click here to see an inside spread from I'm My Own Dog.

Skink - No Surrender - a review

Skink - No Surrender is Carl Hiaasen's first foray into YALit and he's making his entrance in a big way—employing Skink, the outrageous and outlandish character from his adult novels.

In keeping with his customary practice of setting books in Florida's great outdoors (Hoot, Flush, Scat, Chomp), Skink No Surrender begins on a Florida beach where Richard finds Skink buried in the sand—on the hunt for turtle egg poachers. Though at first taken aback by the one-eyed, cammo-wearing giant of a man with buzzard beaks braided into his beard, Richard soon finds out that he is the ex -Florida governor and a force to be reckoned with - even if he is presumed to be dead.

All kinds of wild rumors got started, and some of them turned out to be true.  According to one Wikipedia entry, the ex-governor became a wandering hermit of the wilderness, and over the years he'd been a prime suspect in several "acts of eco-terrorism."  Interestingly, he'd never been arrested or charged with any serious crimes, and it seemed to me that the targets of his anger were total scumbags, anyway.
The web article included interviews with a few witnesses who'd supposedly encountered Clinton Tyree by chance.  They said he'd lost an eye, and was going by the name of "Skink."  They had differing opinions about whether or not he was nuts.  The most recent entry quoted the governor's closest friend, a retired highway patrol trooper named Jim Tile, who said:
"Clint passed away last year int he Big Cypress Swamp after a coral snake bit him on the nose.  I dug the grave myself.  Now, please let him rest in peace."
Except the man was still alive.

An unlikely pair, Skink and Richard team up to find Richard's cousin, Malley, who has run off with (or been kidnapped by) a young man she met online.

An intense hunt takes the two across the swamps in search of Malley and a dangerous impostor.  Suspenseful and very funny at the same time, Skink No Surrender presents a case for Internet safety, bird habitat conservation, and the value of family, but you'll be havimg so much fun that you won't even notice!

See the first 56 pages of Skink No Surrender here.

An Educators' Guide will be forthcoming.

On sale and in libraries beginning September 23, 2014.

Colors of the Wind - a review 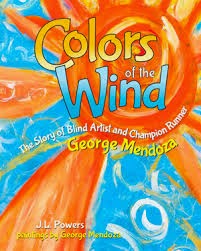 National Hispanic Heritage Month is September 15 - October 15. What a great time to celebrate the life and work of Mexican-American painter, George Mendoza.

As a child, George Mendoza began seeing brilliantly-colored lights, shapes and squiggles, eventually losing most of his sight except his peripheral vision and the ever-present colors.  Unable to play basketball or other do other things he wanted, George took up running. He excelled in the sport and competed twice in the Olympics for the Disabled.  In the back of his mind, however, he'd kept a long-ago word advice from his youth.

One day, a flyer arrived in the mail,
advertising a contest for blind artists.
George remembered the priest, who told him,
"You should paint what you see."


George started to paint,
just like the priest told him to do.

And so began the painting career of George Mendoza.

Biographical information, photos of Mr. Mendoza, and painting titles are included in the book's back matter.

The joyful, riotous colors of Mendoza's paintings will certainly appeal to children, as will his story of perseverance and purpose.  Enjoy!

You can see photos from Mendoza's "Colors of the Wind" exhibit at the Ellen Noel Art Museum here.  The exhibit is listed with the Smithsonian Affiliate Exhibition Exchange.

Below is my review of the audio version of Middle School: Ultimate Showdown by James Patterson and Julia Bergen, as it appeared in the June, 2014 edition of School Library Journal.

Gr 3–6—Rafe Khatchadorian and his younger sister, Georgia, here engage in a series of rants about bullies, school dances, dress codes, and other middle school concerns. However, this work is not simply about rants. It centers on a showdown between the siblings—with listeners acting as judges. Included on the CD is a 66-page PDF offering. Listeners who print it out can vote, draw, play, and create, adding their own opinions to Rafe's and Georgia's. Narrators Bryan Kennedy and Cassandra Morris make it easy for listeners to follow the inevitable disagreements between the siblings. Morris, as Georgia, is likable, confident, and youthful. Kennedy's Rafe is perfect for the wisecracking troublemaker, but he suffers from the lack of character depth in the showdown format. Listeners not familiar with his character from other books in the series will find him shallow and arrogant. While considerable adaptations were made for the audiobook format, the necessity of printing and constantly referencing the lengthy PDF will likely limit this audiobook's appeal to book group facilitators and die-hard fans of the series.