Some library humor at the ALSC Blog

You can find me over at the ALSC Blog today with a little bit of library humor.  Please stop by and read about one of my favorite library patrons.  [http://wp.me/p5Z0QG-32Q]

And if you know of a good, new, middle-grade book trailer, please tell me about it in the comments.  My book club is meeting this afternoon.  Thanks! 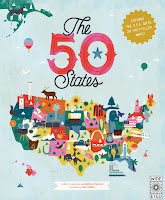 New Jersey knows that it's the butt of jokes throughout the nation, but we also know that we've got a great state with unique features that no other state can match.  From the mountains to the shore, from the cities to the Pines, we've got a wealth of natural beauty, history, and culture.  It's like a well-kept secret.  But now, The Fifty States: Explore the U.S.A. with 50 fact-filled maps, written by Gabrielle Balkin and illustrated by Sol Linero (Quarto, 2015) is bringing some of our secrets to light.


Take a peek at the New Jersey page, and then I'll share a few of my favorite NJ gems. 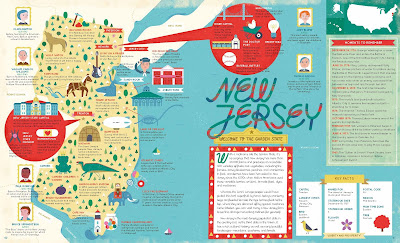 Three of my NJ favorites which are featured in The Fifty States: Explore the U.S.A. with 50 fact-filled maps:

Thomas Edison National Historical Park is a fascinating place to visit.  In my opinion it beats visiting Thomas Edison Center in Menlo Park, NJ and his winter estate in Fort Myers, Florida.  He didn't just invent the light bulb, he invented everything you need to use a light bulb - from the lamp to the power grid.  And of course, he invented much more than the light bulb.  Not a perfect man, by any means, but a perfectly brilliant inventor!

She's a whopping 6-stories high and 134 years old, and she sits right next to the beach.  And what a view from inside!  I'm not positive but I do remember that her interior paint color is "stomach," or something similarly intestinal.

Paterson, NJ, may not be your first thought when seeking tourist sites, but it's well worth a visit.  Paterson Great Falls National Historical Park is one of the nation's newest National Parks. The falls (one of the largest in the nation) and park sit in the midst of an urban city of more than 145,000 people. The falls and the people of Paterson were powerhouses of the U.S. Industrial Revolution.
If you want to know more great sites in NJ, you'll have to come see for yourself. (BTW, Come See For Yourself, was once our state slogan. I think they should have gone with the more popular, "New Jersey - You got a problem with that?")

Note:
Book images and quotes were provided by the publisher.  I have no publisher or bookseller affiliations and received no compensation.  I am participating for love of state. 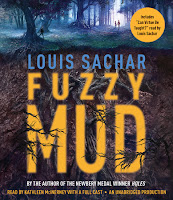 Fuzzy Mud by Louis Sachar, winner of the Newbery Medal and National Book Award for Holes.  Narrated by Kathleen McInerny with a full cast and an author's note read by Sachar himself. (Listening Library, 2015)
4 hours
Target audience: Grades 5 and up

I reviewed Fuzzy Mud for AudioFile Magazine, and loved it. As I should have expected from Louis Sachar, there is much more to it than I first expected.  It's a sci-fi, adventure thriller,that focuses on the very broad concept of ecology as well as the more intimate problem of bullying. A link to my review for AudioFile Magazine is here. [http://www.audiofilemagazine.com/reviews/read/104469/]

I highly recommend it.

Below is my review of Completely Clementine, as it appeared in the October 1, 2015, edition of School Library Journal. 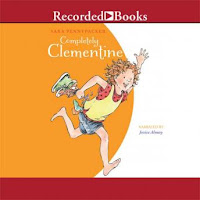 Gr 2–4—Clementine faces a host of rising fourth-grader issues as the school year ends. She’s feuding with her father over his refusal to become a vegetarian like the rest of the family, she can’t bring herself to say goodbye to her third-grade teacher, and the family’s new baby is due soon and they haven’t even chosen a name yet. Picking the baby’s name should be easy, but her other problems are more serious. She’s avoided her teacher and given her dad the silent treatment for so long that she begins to regret it—but it’s so hard to stop! Clementine and her friends sometimes exhibit the concerns of adults (school friends worry about future wedding plans), but Clementine’s steadfast good nature and silliness are endearing and relatable. Jessica Almasy narrates, bringing infectious enthusiasm to Clementine’s usually upbeat and slightly sassy personality. Other character voices are clearly defined, with Clementine’s parents sounding especially authentic. VERDICT Fans of the series and kids ready to move up from Junie B. Jones will enjoy. [“This last title in the popular and laugh-out-loud chapter book series is a must-have for library collections": SLJ 2/1/15 review of the Disney-Hyperion book.]

Note:
The review was edited slightly and did not include the following:
Jessica Almasy narrates all of the Clementine books. A New Yorker herself, she sounds more Southern Californian than befits Clementine’s Boston environs, but she brings infectious enthusiasm to Clementine’s usually upbeat and slightly sassy personality.

Listen to a sample of Completely Clementine here.
- October 13, 2015 No comments:

As a child, I remember the Olympics mainly as an opportunity to root against the Eastern Bloc countries.  That may seem petty, but my family has/had relatives in the former Czechoslovakia, and that's what we did.  In our family, a loss by an Eastern Bloc country was a win for democracy - as if beating East Germany in pole vaulting could somehow make things better.  In reality, for the people of the Eastern Bloc, losing likely made their miserable lives worse - if they even knew about it at all.

There are many historical fiction books about wartime Germany.  A Night Divided deposits the reader in post-WWII Germany — in Berlin, on the wrong side of the wall.

A Night Divided by Jennifer A. Nielsen
(Scholastic, 2015)

In A Night Divided, 12-year-old Gerta, narrates the dangerously oppressive lifestyle into which she was unwilling thrust,

It was Sunday, August 13, 1961, a day I would remember for the rest of my life.  When a prison had been built around us as we slept.


Erected without warning, the fence (and later, the wall) that separated East Germany from West Germany sprang up overnight - a night when Gerta's father and brother had been visiting the West.  Gerta is trapped in the East with her resigned mother, and her rebellious older brother, Fritz.  Rebellion in East Germany is costly, and the price can be your life.

"We will never be able to leave," Mama said. "The sooner you both accept that, the happier you will be."
I nodded back at her. But I new I could never again be happy here. And I refused to accept my life inside a prison."

This is a deeply affecting novel that does not gloss over the reality of living under the constant watchful eyes of the police, the Grentztruppen or border police, and the brutal secret police, the Stasi.  In 1960s, East Germany, even a casual comment to a neighbor can be life-threatening.

Each chapter is introduced with a quote or German proverb that sets up the rationale for Gerta's continued, secretive resistance. "The only way to deal with an unfree world is to become so absolutely free that your very existence is an act of rebellion. — Albert Camus, French novelist"

Gerta Lowe is a character that the reader will cheer and remember.  A Night Divided is a chilling and riveting book, balanced by the hope of one family's love and courage. 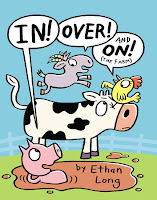 This edition of the Picture Book Roundup features three funny books, a hilarious cautionary tale, and a sweet bookish story to melt your heart. Enjoy!

Review copies of Night Animals by Gianna Marino (Viking, 2015) and In! Over! and On! by Ethan Long (Penguin, 2015) were provided by the publishers at my request. The Good Little Book by Kyo Maclear (Tundra, 2015), Everyone Loves Bacon by Kelly DiPucchio (Farrar, Straus, & Giroux, 2015), and Ragweed's Farm Dog Handbook by Anne Vittur Kennedy (Candlewick, 2015)

If you can't access the slide show with reviews below, you can see it on RiffleBooks at this link. [https://read.rifflebooks.com/list/185319]

The Death Knell for Show-and-Tell

The Death Knell for Show-and-Tell

For  Library Card Sign-Up Month, I visit every Kindergarten class in town.  I talk about all the great reasons to have a library card, drop off applications for each student, and read a book - preferably a funny one.  Because I visit at least 12 different classrooms, I usually bring an assortment of books so I don't get bored reading the same one in each class.

This year, I brought Otto the Book Bear by Katie Cleminson (not funny, but a perfect choice for pitching libraries!) A Perfectly Messed-Up Story by Patrick McDonnell (the "what not to do with your library book" book), and Elise Parsley's, If You Ever Want to Bring an Alligator to School, Don't!. 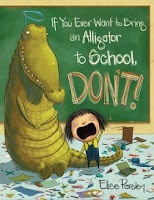 If You Ever Want to Bring an Alligator to School, Don't (2015, Little, Brown) is a new book that I find hilarious.   A little girl brings her alligator to school for show-and-tell, and all havoc breaks loose.  I thought it would bring some giggles to Kindergarten kids.  At my first visit, I asked the teacher if the kids had begun show-and-tell yet. I wanted to make sure they would get the joke.  I was told that the new, more rigorous Kindergarten curriculum did not allow the time necessary for the rather lengthy process of show-and-tell.  The teacher suggested that the book would be best shared with preschoolers as they are the only ones with time for show-and-tell.  How sad.

This isn't an individual teacher's decision, it is a by-product of strict, standards-based education.  I get it.  I truly do, but I am glad that I am not a child today.  Today's body of knowledge is so much greater than it was when I was in school, and the process of educating children has moved to a business-like model.  These factors combine to remove much of the joy of early learning - free play, music, art, and show-and-tell.

If you're a parent or librarian or teacher with a few minutes of free time, spread some joy wherever you can.  Life is hard - even in Kindergarten.