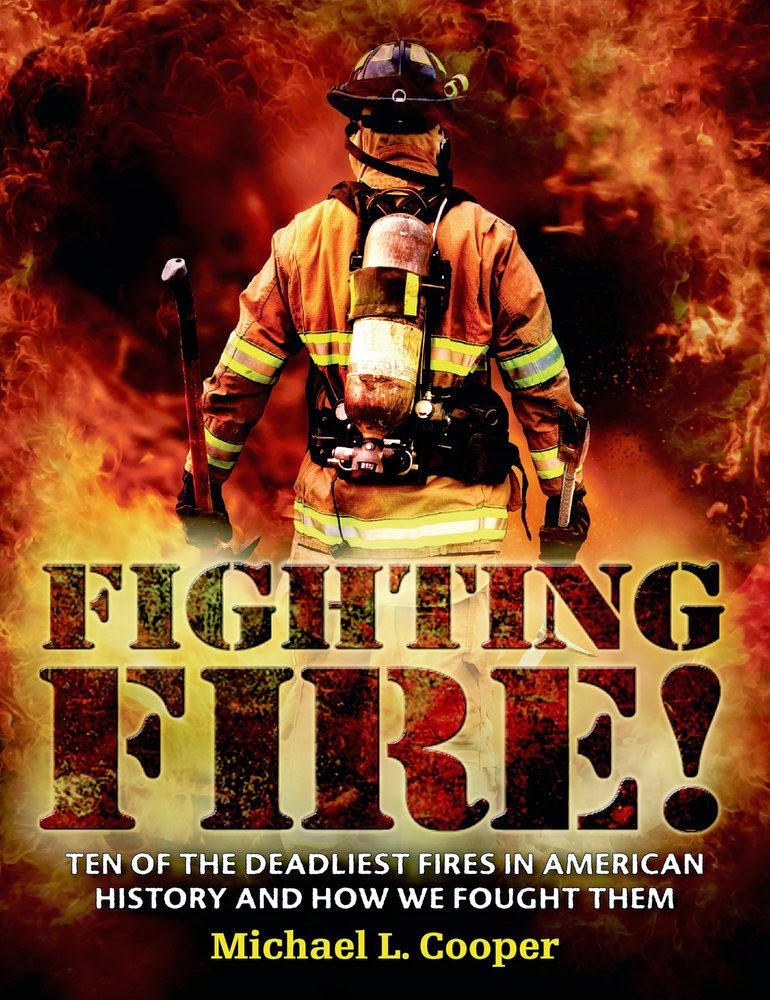 Cooper, Michael L. 2014. Fighting Fire! Ten of the deadliest fires in American history and how we fought them.  New York: Henry Holt.

From the "Great Fire of 1760," which destroyed 349 homes in Boston, to San Diego's "Witch Fire" of 2007, which destroyed 3,069 homes and buildings, burned half a million acres and killed 17 people, Fighting Fire! details ten of America's worst fires.  Presented chronologically in individual chapters, Fighting Fire! combines an account of each fire with the evolution of fire fighting practices, and the public's evolving view of fires, fire safety, and firefighters.

With plenty of photographs, quotes, and illustrations, Fighting Fire! is an engrossing read. Consider this passage from "Fire on the Water, New York, 1904," which is accompanied by several photographs.

Some passengers saved themselves in grisly ways.  "I didn't have no life preserver at all," said ten-year-old Henry Ferneissen.  "I went down twice and I swallowed a whole lot of water, but pretty soon I caught hold of a dead woman and then somebody grabbed me with a hook.  If it hadn't been for that dead woman I'd been drowned sure."
One hour after embarking, the General Slocum was a smoldering ruin and most of its thirteen hundred passengers were dead.  One survivor said, "To my dying day I'll never forget the scene. Around me were scores of bodies, most of them charred and burned."

The General Slocum tragedy is the worse peacetime maritime accident in American history.  It was New York's deadliest disaster until the twenty-first century.


Each tragic fire brought about some change or warning, albeit often small or initially unheeded, that informed future generations.  Following the fire in Boston, 1760, building codes and street design were re-examined.  Fire Prevention Week, recognized each year in October, is in remembrance of the Great Chicago Fire of 1871, which began on October 8. The San Francisco fire of 1906, highlighted the importance of reliable water supplies. The Triangle Shirtwaist Factory Fire of 1911, prompted new workplace safety regulations.  Out of each tragedy came knowledge that benefits us today.

Well-researched and documented, this is a perfect choice for school assignments or for anyone interested in becoming a firefighter.  I'm even suggesting it to my husband, a career firefighter.

See a slide show of images from Fighting Fire! at the publisher's website.

Check out other nonfiction book reviews on the Nonfiction Monday blog.
- April 28, 2014 No comments:

The Cat with Seven Names - an audiobook review


(My review of The Cat with Seven Names, as it appeared in the April, 2014, edition of School Library Journal.) 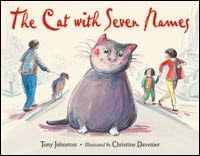 PreS-Gr 2— A plump, seemingly stray cat wanders occasionally into the home of an older librarian. She names her visitor Stuart Little. At an elderly neighbor's home, he receives the moniker Kitty-boy, while a lonely Mexican man names him Placido for his "singing" voice. A homeless vet calls him Dove, for the peace he brings. Only the cat is lacking his own voice in this heartwarming story of a busy neighborhood, full of unconnected adults. Each character has his or her own first-person narrator, each distinctly different. The Hispanic man peppers his speech with Spanish words, as he first meets "Placido" on a day when it rains gatos y perros. Humorous wordplay abounds throughout, in which the cat is the common fixture in the lives of seven adults and a young girl. When the cat has a near accident, the full cast calls out seven different names, as each rushes to save the feline that has befriended them all; and through the cat, they befriend each other. The Cat with Seven Names will be sold with and without its corresponding picture book. Consider purchasing the set. Absent illustrations, the steady stream of elderly and adult voices may not be enough to hold a child's attention.

A bi-racial, Jehovah's Witness girl; a poor boy from the trailer park; a nerdy Jewish boy—all victims of school bullying.

Sounds like a perfect trio of protagonists for a serious book of realistic fiction, doesn't it? But it's not—not really. These are the founding members of Tom Angleberger's hilarious new creation, the QwikPick Adventure Society, which makes its debut in a new series, The QwikPick Papers.

So, what do this Jehovah's Witness, Jew, and very poor kid have in common? At first, only that each has nothing to do on Christmas Day.  Marilla and Dave don't celebrate Christmas and don't enjoy spending time at home.  Lyle's parents have to work at the QwikPick convenience store all day. But don't feel sorry for them.  It's the perfect day for a secret mission to visit the Poop Fountain, an antiquated aeration device at the town's waste water treatment plant.

Written as an illustrated "report" by the QwikPick Adventure Society, this novel of only 135 pages, Poop Fountain! is stomach-churning disgusting at times, and hilariously funny at others.  That's why kids will love it, but it's not why you should.

You should love it because Angleberger has proved again (as in the Origami Yoda series) that he can tackle sensitive subjects with charm and  a good deal of humor.

Everybody else was talking about the Super Bowl coming up that weekend, but we all agreed that it was stupid and football was stupid and the Redskins' mascot was stupid.
Unfortunately, Jeremy heard me saying something and hollered down the table, "Hey, if we wanted any of your crap, I'd beat it out of you."
"Shove it, Jeremy," said Dave, which was the nicest thing anyone had ever said in my honor.
When it was time to go, Marilla said, "Hey, if you want, I'll save this seat for you tomorrow."
That was when, without them even knowing it, Marilla and Dave became my best friends.


Other reasons for you to love Poop Fountain!, "shout-outs" to

I encourage you not only to celebrate and patronize your library, but also to consider become an advocate for libraries and librarians.   Below are some of the ways you can help your favorite library.

Take an interest in any of the following:

It's been ages since I've done a picture book roundup!  Here are two wordless masterpieces. 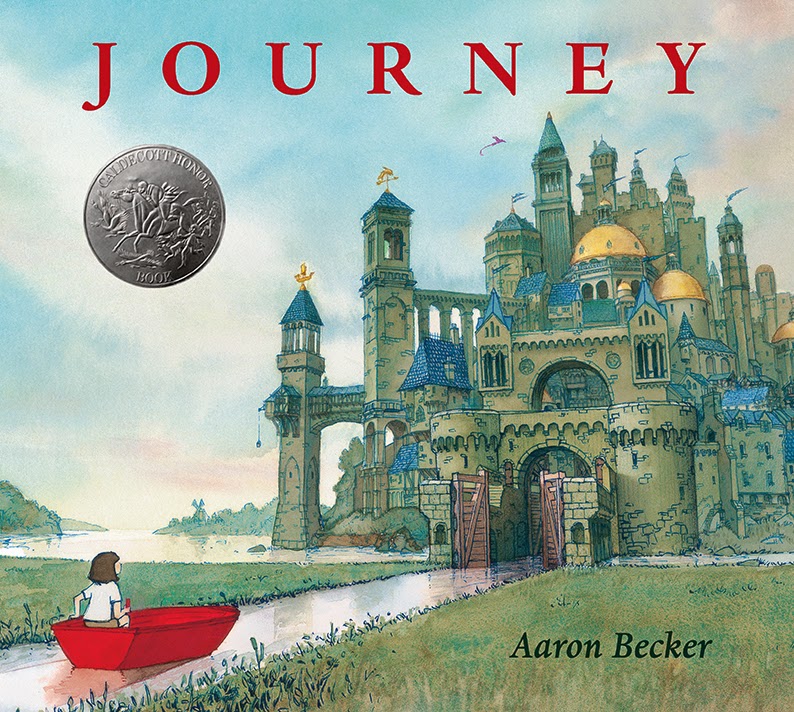 A Harold and the Purple Crayon for a new generation.  Beautiful! 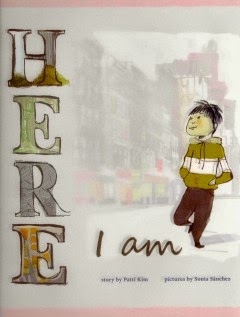 An insightful story of a young boy's experience in emigrating from Asia to the United States.

If you're unsure of how to use a wordless picture book in the classroom, the nice folks at Random House have created a Teachers Guide for you.  If you're sharing at home, your child can teach you. ;)
- April 10, 2014 No comments:

Recently, I reviewed an audiobook version of a comic book.  It sounded crazy to me, but it works!  Below is my review as it appeared in the April/May 2014, issue of AudioFile Magazine. 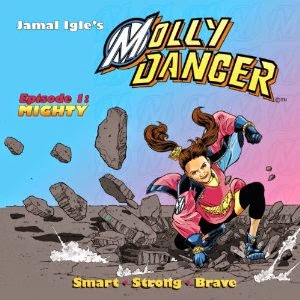 I'm still working my way through all the books I picked up at the ALA Midwinter Meeting.  Lulu's Mysterious Mission is the third installment in this illustrated, chapter book series.  I don't know why I never got around to reading the first two, but I'm making it up with a booktalk and a book trailer.  Enjoy!

Lulu's parents are going away on vacation, and they're doing the heretofore unthinkable, they're going without Lulu! When she meets her babysitter, the militant, Ms. Sonia Sofia Solinsky, and eats her first bean-and-beet omelet (a "taste" of things to come), Lulu begins to hatch some desperate plans.


Funny with frequent asides by the author, Lulu's Mysterious Mission will appeal to humor fans, ages 6-10. Oh, and, yes, there may be a mysterious mission.

On a bookshelf near you, beginning April, 2014. 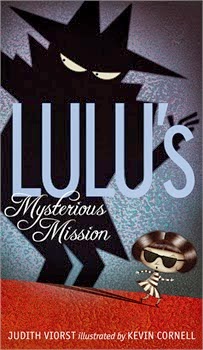