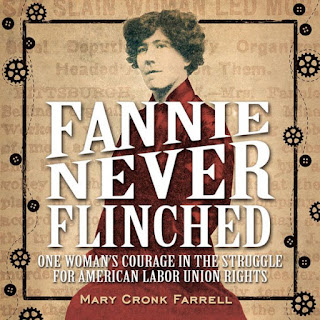 Fannie Never Flinched is the true and tragic life story of early labor leader, Fannie Sellins, but it is also the heartbreaking story of tens of thousands of laborers in the United States.  Fannie first became interested in the rights of American workers when she was forced to work in a garment factory sweatshop after the death of her husband.  Working conditions in the late 1800s were harsh—long hours, dangerous conditions, and extremely low pay.

In 1902, Fannie launched Ladies' Local 67 of the United Garment Workers of America, eventually earning a shorter work day and increased wages for the new union.  Seeing that other Americans were suffering as well, Fannie became an outspoken labor leader. She traveled the country supporting other unions, including coal miners working under horrific and deadly conditions in Missouri, West Virginia, and Pennsylvania. Although her activism ended in her murder by sheriff's deputies in a Pennsylvania coal mining town, her legacy lives on.

Fannie Never Flinched is a treasure-trove of annotated images and photos chronicling the American labor struggle. At one point, Fannie was briefly jailed. Readers can see one of the many postcards sent to President Wilson to petition for her release. In telling her story, the author uses Fannie's words whenever possible,


"Help us fight," she told union coal miners during a speech in Illinois in November 1909.  "We women work in factories on dangerous machinery, and many of us get horribly injured or killed.  Many of your brothers die in the mines.  There should be a bond of sympathy between us, for we both encounter danger in our daily work."

The miners stomped their feet and shouted their agreement.  Some were so moved by Fannie's speech, they wiped tears from their eyes.

The struggle for American labor rights is a story of individuals striving for fair wages and safe workplaces, realizing that there is strength in numbers. Fannie Never Flinched is a well-researched, compelling story of the individual human sacrifices that were made for the common good, in order to provide future generations with things that we now take for granted—weekends, lunch breaks, the 8-hour-day, safety regulations, and vacations. There will always be friction between employers and workers.  The struggle continues today. 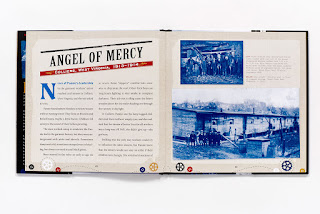 A memorial to Fannie Sellins is located in the Union Cemetery in Arnold, Pennsylvania.

My local library did not own a copy of Fannie Never Flinched, so I requested that they purchase it, which they did.  It's a wise addition to any library collection.

The Bridge - a graphic novel review 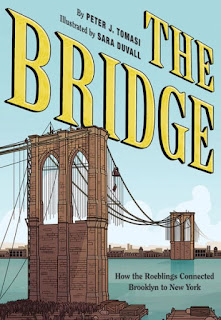 If you've never watched the Ken Burns documentary, "Brooklyn Bridge," you may not fully grasp the truly marvel qualities of the Brooklyn Bridge.  Besides being an engineering masterpiece, it is an architectural beauty, and the result of a heroic and lengthy commitment by the Roebling family and countless workers.  The Bridge: How the Roeblings Connected Brooklyn to New York is the true story in graphic format of the epic task of building the bridge.

The book begins in 1852, when the bridge was just a dream in the mind of John Augustus Roebling and his son Washington.  Washington Roebling's father was a non-nonsense man, who doled out praise sparingly, but had great faith in his son. In 1862, after designing the bridge and receiving approval for its construction, John Augustus Roebling died and the young Washington Roebling became the chief engineer—a job that he eventually shared with his wife, Emily, after he contracted what was then an unknown disease.

Peter J. Tomasi tells this heroic story with little need for explanatory text, employing artistic license to recreate dialogue that rings true and gives a real feel for the political and personal dramas that unfolded throughout the fourteen years that passed during the bridge's construction.This is not an entirely personal story however, Tomasi includes ample description of the actual engineering of the bridge—a process with many failures and tragedies on the road to eventual success.

This is Sara DuVall's first graphic novel and the style is simple and appealing.  The colors are bright and engaging, but background details are minimal, allowing the reader to focus on the expressions, the emotions, and the individual episodes that tie this epic story together.

The Bridge: How the Roeblings Connected Brooklyn to New York is well researched and accurately captures in graphic format this engineering marvel and the personal triumphs and sorrows associated with it.

See a slide show of images from The Bridge at Abrams Books. 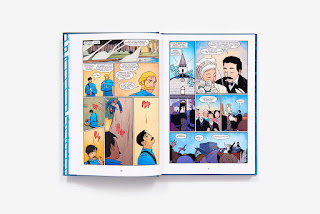 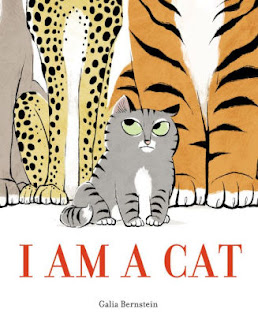 This is a positively delightful debut picture book that reminds us to celebrate our similarities rather than focus on our differences!

Read this for storytime, or use it as a humorous introduction to a lesson on animal classification. This is definitely one of my new favorites! Watch the video and see for yourself that I am a Cat is a "must-have" picture book.

I can't wait to see what @galiabernstein does next. 😺

What Is Free Comic Book Day?

Just a friendly reminder that Free Comic Book Day is this Saturday!