I'm over at the ALSC Blog today with a post on my recent stint as a "virtual teacher."  Please hop over and read it.

The Boy Who Harnessed the Wind: Young Readers Edition

The story of William Kamkwamba is so inspiring that three books have been written to tell it. I listened to the audio book version of the 305-page, young reader's edition.

My review of The Boy Who Harnessed the Wind: Young Readers Edition,
written for AudioFile Magazine, is linked here.

I cannot recommend this one enough.  I hope you have time to read at least one version of this inspiring true story of a teenager who created electricity for his impoverished, starving village in Malawi with nothing more than garbage, an elementary education, an old borrowed Physics book (in a language that he did not speak or read!), and a will to make things better!

Here are William Kamkwamba's two TED Talks.  They're short and well worth a listen.
[http://www.ted.com/talks/william_kamkwamba_on_building_a_windmill?language=en]

Feet, Go to Sleep - a review

Welcome to the final stop on the Barbara Bottner blog tour for her latest book,
Feet, Go to Sleep, illustrated by Maggie Smith and published by Alfred A. Knopf. 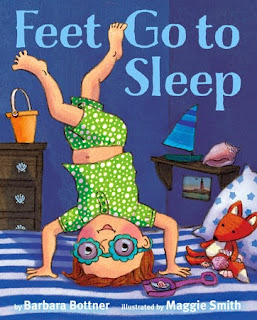 Fiona has spent the day at the beach and now it's time for bed.

This may be a bedtime story, but Maggie Smith's bright illustrations are richly colored and full of life.

"Toes, go to sleep!" said Fiona.
Toes were for gripping flip-flops on the way to the beach.
Toes were easy.  They went right to sleep."

The illustrations feature bright and bold depictions of Fiona's earlier daytime activities, while the pajama clad Fiona is contrasted in a smaller inset box, growing wearier with each page until she is finally and peacefully asleep against a backdrop of evening blue.  Feet, Go to Sleep is an attractive combination of enjoyable and practical.

Although I was traveling, and did not have time to submit interview questions to author Barbara Bottner, she was kind enough to answer one question for me.  As a Jersey Shore gal, I was curious if Feet, Go to Sleep is based on any particular beach - perhaps one of Ms. Bottner's favorites. Bottner enjoyed frequenting Jones Beach on Long Island as a teenager, however, the location of Fiona's activities are not based on any specific beach, In fact, the book's location was added after the first draft. I have actually (succesfully) used the relaxation technique in Feet, Go to Sleep many times, although I've never needed it after a day at the beach. For me, a day at the beach is a relaxation technique in itself.  Ah, that salt air!

Previous stops on the blog tour include:

I've been reading (and writing!), but no reviews for you today, just a few announcements:

Today is the start of  Scholastic’s #IReadYA week - a celebration of all things YA.  In support of this week, Scholastic will be holding daily challenges beginning today and running through Friday the 22nd. By participating in the challenges, you earn the chance to win #IReadYA prizes including: #IReadYA tote bags, tumblers and free YA books!

The fun daily challenges range from describing a YA book only using words that start with the same letter (e.g. Harry helps Hogwarts, hefting horcruxes), to sharing YA reaction videos/memes.

Some YA authors will also be participating with impromptu Twitter chats, Tumblr posts and more.

To become a part of #IReadYA week and take part in the daily challenges, click here:
Scholastic’s #IReadYA Week

And on the topic of YA books, I attended a Penguin Random House Book Buzz event on Friday. Library of Souls, the final book in the Miss Peregrine's Peculiar Children series will be coming out in September.  The final cover will be revealed this month.  And coming next spring, is Miss Peregrine's Home for Peculiars, the Tim Burton movie based on the first book in the series.

And finally, today, as it is every Monday, you can visit the Nonfiction Monday blog to see what's new in nonfiction for kids and teens.

Mesmerized: How Ben Franklin Solved a Mystery that Baffled all of France - a review

You've heard the term mesmerized before, and you've likely heard of a blind study in medical research (in which study participants are unaware of whether they have been given a treatment or a placebo).  But do you know what these two terms have in common?  Benjamin Franklin!

Mesmerized: How Ben Franklin Solved a Mystery that Baffled all of France
Written by Mara Rockliff. Illustrated by Iacopo Bruno. Candlewick, 2015

When Benjamin Franklin arrived in France seeking support for the American cause, Paris was all abuzz about recent advances in science, but one man in particular was drawing much attention - Dr. Franz Mesmer.  Like the invisible gas that was recently proven to buoy giant passenger-carrying balloons when burned, Dr. Mesmer claimed that he, too, had discovered a powerful new invisible force.

Dr. Mesmer said this forced streamed from the stars and flowed into his wand.  When he stared into his patients' eyes and waved the wand, things happened.

Children fell down in fits.

Mesmer and his practitioners claimed to cure illnesses in this manner, but was is true?  Or was it quackery?  King Louis XVI wanted to know, and Benjamin Franklin was sent to find out.

Mesmerized is one of those wonderful books that combines history with science and humor.  Using the scientific method, Benjamin Franklin was able to deduce that Dr. Mesmer had indeed discovered something, but not the something he had claimed!

Delightfully humorous and informative illustrations, a section on the scientific method (Ooh La La ... La Science!). and a list of source books and articles make Mesmerized a triple-play - science, humor, and history.  Go ahead, be mesmerized!


*This post also appears on the STEM Friday blog today.

Below is my review of Jon Agee's Terrific as it appeared in the April 1, 2015 issue of School Library Journal.  The review was slightly edited from my original.  I didn't refer to Eugene as "the boy."  Eugene is definitely not a boy, as you can see by the cover illustration.  ;)

PreK-Gr 2--Eugene's life follows Murphy's Law--if something can go wrong, it will. And when inevitable misfortune falls, Eugene's favorite expression is a sarcastic, "Terrific." So, it's no surprise that when the boy's Eugene's cruise ship sinks, all the passengers (except Eugene) are rescued, and he finds himself on a deserted island with a talking parrot. "Terrific," says Eugene. Narrator Kirby Heyborne plays the resigned, older, and long-suffering Eugene perfectly with a mix of sarcasm and fatigue, and creates a suitably squawking voice for the take-charge parrot who will change his attitude. Sound effects including boat horns, construction din, and ocean waves complement the story. Though listeners will miss Agee's humorous illustrations, the CD includes a fun musical version of "Terrific," sung by Heyborne with music by the Promise Makers. The lyrics are slightly modified from the text to fit the upbeat rhythm and rhyme scheme of the song, but stay true to the original story. VERDICT Purchase this one for sharing with school or storytime groups, one with a copy of the print book.--