The Three Little Pigs and the Somewhat Bad Wolf - a review 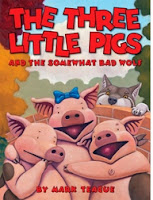 If you check my LibraryThing account, you'll see that I have 15 books tagged "pigs," and those are just a few of my favorites.  Sometimes I even have a pig-themed storytime. Here's another book of preposterous porcine protagonists to add to my list of favorites!

The three comically large, anthropomorphic pigs are painted with Mark Teague's signature bold colors and droll style. They are as humorous as the story itself. The opening double-spread finds two pigs in their pen, playing basketball in a pile of mud, surrounded by empty soda bottles and scattered potato chips. A third pig, also in the pen, is seated in an armchair reading a book, a neatly chewed apple next to him on a smartly appointed white tablecloth.  All three pigs look toward the farmer,

Once there were three little pigs.  They lived on a farm, as most pigs do, and were happy, as most pigs are. Then one day the farmer told them that he and his wife were moving to Florida.  He paid the pigs for their good work and sent them on their way.


And so begins the familiar adventure with a comic twist.  One pig spends his wages on potato chips, one buys "sody-pop," and the third ("who was altogether un-pig-like"), buys building supplies. Teague's take on the story includes a hapless wolf who is very hungry and only somewhat bad.

The characters loom large on double-spread, full-bleed illustrations, making this a perfect book to share with a group. Jon Scieszka's The True Story of the Three Little Pigs may be the standard bearer for fractured folk tales, but The Three Little Pigs and the Somewhat Bad Wolf is a worthy addition to the canon of "Three Little Pig" tales. Great fun!