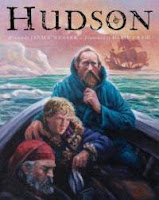 The Hudson River, the Hudson Bay, the Hudson Strait - all bear the name of Henry Hudson, the English explorer.  Though he never found the northern passage to China that he was seeking, Janice Weaver’s new book, Hudson, shows that he was likely a competent and fearless seafarer, and ultimately helped to advance humankind’s knowledge of the world.


"I hoped to have a clear sea between the land and the ice,” wrote Hudson in his journal, “and be able to circle north of this land.”

The book is divided into short, chronological, illustrated chapters that recount his early life, his four major voyages (1607-1610), the mutiny that likely claimed his life, and its aftermath. Text insets offer additional information to add interest and context to the story.  “The Art of Navigation” inset contains a photograph of a seventeenth-century astrolabe and a short explanation of its use and of the many difficulties of sailing in an age when sailors had to rely on the stars to determine their location.  Other insets highlight the whaling and spice trades.  Particularly interesting is “Of Mariners and Mermaids,” in which readers are reminded of the superstitions of the time.


In Hudson’s journal entry for June 15, 1608, he records matter-of-factly that his men have spotted a mermaid swimming alongside the ship.  “She was close to the ship’s side,” he reports, “and looked earnestly at the men.... As they saw her, from the navel upward, her back and breast were like a woman’s... and she had long black hair hanging down behind.  In her going down they saw her tail, which was like the tail of a porpoise, and speckled like a mackerel.”

Further reading sites, historic sites, credits and an index follow this fascinating look at a fascinating explorer.  Interesting and well researched.  Recommended for ages 9 and up.

Note: Don’t seal down the dust cover on this one. The inside of the jacket is an attractive poster with map!