A Wrinkle in Time - audiobook 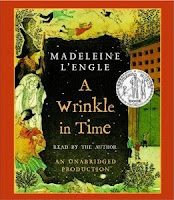 It's been many, many years since I've read A Wrinkle in Time, and actually, I'm not sure that I liked it as a kid.  I was never much of a sci-fi fan.  In any case, after reading last year's, When You Reach Me, I was inspired to read it again, but forgot about it until recently, when I downloaded the audiobook version.

I remembered some of the story, but had forgotten much.  I didn't remember the religious overtones in the latter half of the book (or perhaps I never realized that Mrs. Who was quoting 1 Corinthians);  I certainly can't understand why this book has been challenged by various groups over the years.  I remember A Wrinkle in Time as a sci-fi, fantasy, time-traveling book, which, it is.  Although it was written in 1962, Madeleine L'Engle did not record the audiobook until the 1990s, when she was well into her seventies.  At first, I wasn't sure that I would like her narration - the voice perhaps too old, too flawed - but that initial perception quickly faded.  There is something special about hearing an author read her own book.  There is less room for personal interpretation, but the listener can be sure that she is understanding every nuance that the author wishes to convey.  Minor details cannot be misconstrued as important ones.  Ambiguity only exists if the author wishes it so.  It was great to revisit this old classic.  Expect to hear more about A Wrinkle in Time in the coming months.

Some Wrinkle facts and news: