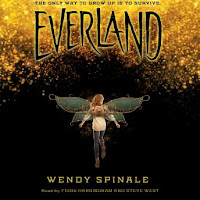 Everland is a *steampunk homage to Peter Pan, and the first in a series.  The setting is London, renamed Everland after its defeat by the Germans and the ravages of a deadly virus that targets adults.

Listen to a sample clip of Everland here: [http://www.audiobooks.com/book/stream/263509]

Everland is told from the dual perspectives of Gwen and Hook, and has two capable narrators.  This is ostensibly a YA title so it has a hint of romance, but I think it's also appropriate for younger readers.  It was a tad too sentimental in places and there were a few modernisms I would have left out (the word "snark" and a fist-bump come to mind), but it's a faithful re-working of the Peter Pan story and has great potential as a series.

Note:
If you're not familiar with the steampunk genre, here's a primer that I've posted before:


*steam·punk [steem-puhngk]
noun
1.a subgenre of science fiction and fantasy featuring advanced machines and other technology based on steam power of the 19th century and taking place in a recognizable historical period or a fantasy world.
2.a subculture inspired by this literary and film subgenre: the fashions and gadgets of steampunk.
Also, steam punk, steam-punk.
Origin:
1985–90;  modeled on cyberpunk