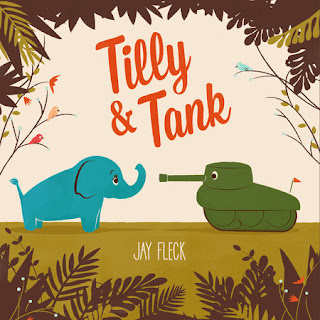 The basis for Tilly & Tank is a clever idea. From an artistic point of view, a tank and an elephant are similar. The elephant has a trunk, tail, and head. The tank has a barrel, flag, and turret. They recognize themselves to be similar, but are unsure of their differences. Tilly is a peaceful shade of blue. Tank is army green. Tilly assumes Tank to be a friend. Tank assumes Tilly to be the enemy. In the end, however, it's a story of friendship, and incorrect assumptions,

"Oh no! thought Tank. He had been wrong. That wasn't an enemy. That was a friend!"


While the characters are endearing—digitally enhanced paintings in a muted, but colorful palette, the general warlike attitude of Tank may take some explaining. His viewpoint is through the crosshairs of a target sight, and his early responses to Tilly's attempts at friendship are to fire at her.

Tilly and Tank will appeal to kids attracted to weaponry (or elephants!) and educators or parents seeking to reinforce the concept of peace as the alternative to war.