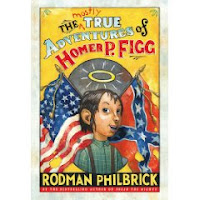 One blog I read (sorry that I can’t remember which!) said that it’s tough to get past the cover art on this one. I enjoy David Shannon's artwork and don't mean to offend; but honestly, I think that the cover art might scare away readers who would otherwise enjoy the book, but are too concerned with looking "cool." (Alas, there are such kids.)

The book, however, is an absolute winner! Set in the 1860s, Homer P. Figg and his brother Harold have a miserable existence in the care of the “meanest man in Maine,” Squinton Leach,

“A man so mean he squeezed the good out of the Holy Bible and beat us with it, and swore that God Himself had inflicted me and Harold on him, like he was Job and we was Boils and Pestilence.”

When Squinton Leach illegally sells Harold into service in the Union Army as a replacement, Homer P. Figg sets off to find him. This sounds like the set-up for a sorrow-filled tale of the Civil War. But, add in the fact that Homer P. Figg is as keen a liar and observer of human nature as was ever created by the likes of Mark Twain, and you’ve got yourself a tale that, although full of lies, lies more likely near the truth. Homer Figg shows us comedy in times of tragedy and dogged perseverance against adversity.

On his quest to free his brother from his illegal conscription, Homer meets an array of colorful characters and shares his wry observations,

as in this passage when he is travelling with an aspiring pastor,

“Dear Kate has been waiting for me all her life. She knew it the moment she looked into my eyes.” Homer wryly notes, “That does it. It can’t be true love. Mr. Willow has eyes like a sick kitten. You might love a sick kitten buy you don’t marry it, you keep it as a pet.”

“The pungent perfume of the pig is still upon you. The suffocating scent of the swine exudes from your person. In a word sir, you stink.” To which Homer declares, “Far as I’m concerned, taking a bath is sort of like drowning, with soap. Never could abide it…”

Homer’s spunk, his determination, and his ability to find joy in life during the direst of circumstances, makes him a winning hero. Yes, there is war and death and dishonesty; but there is also hope.
- September 11, 2009