Cars, pirates and caterpillars - how can you miss? 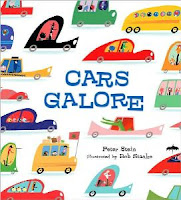 Peter Stein writes about one of children’s favorite topics – cars. In rhyme reminiscent of The Foot Book (which, BTW, I think I might know by heart!) this should be a genuine crowd pleaser. Bob Staake’s digitally-created illustrations are all double-spreads. His often long-necked, pointy nosed, angular humans are humorously squeezed into improbable conveyances that travel along whimsical and scenic blacktop roads set against a backdrop of white space. Kids will love it.

Check out Bob Staake's occasional newsletter on The Sporadic Bob.


"Charlotte Jane the Hearty came howling into the world with the sunrise” … "finer than a ship full of jewels,” and with “formidable oomph.”

Under the loving and watchful eyes of her pirate parents, young Charlotte is a daring little doubloon. At least she was, until she stays up all night and loses her oomph; and then, the search is on! With smart writing that offers more than just Pirate-talk, Wolfe spins a simple, humorous yarn. Monescillo’s digitally retouched and textured watercolor illustrations are crisp, colorful and modern.

Yes, you’ve probably got enough caterpillar to butterfly books (even Ehlert’s own books), but how can you resist the combination of Bill Martin Jr. and Lois Ehlert? A rhyming, counting, nature, butterfly book illustrated in Ehlert’s signature watercolor, cut-paper collage style. Martin avoids triteness by varying the rhyme pattern to offer a final poetic metamorphosis equal to the caterpillar’s natural one.

That's it for tonight.  Enjoy!