Mercy Watson to the Rescue - a review 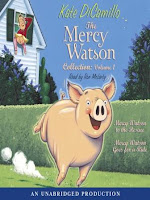 Last week, I was about ready to leave for work when I realized that I had nothing loaded on my mp3 player for the commute. (I have neglected to mention it here, but in January, I traded in my bicycle commute to return to my previous branch) In any case, I began frantically searching my library’s available downloads for something that would load quickly and keep me entertained during my drive to work.

My choice? Mercy Watson. Despite the book's irresistibly cute cover art, I’d never read a Mercy Watson book before.  I thought it was about time. And anyway, how can you go wrong with Kate Dicamillo?

Despite the loss of Chris Van Dusen’s charmingly funny artwork featured in the print version, Mercy Watson still "clicks" as an audiobook.  Upbeat intro music sets the stage and Ron McLarty's narration is a perfect fit, with kind of a retro feel to it - as if you're listening to a favorite old story that you've heard a thousand times before.  (It's hard to believe that he's also the voice of books by David Baldacci, Danielle Steel and Stephen King!)

However, the best thing about Mercy Watson to the Rescue (the first book in the series), is Mercy herself.  She may be a pig, but she's an awful lot like most children - when sent to find help to rescue her parents, she quickly forgets her mission and goes instead, in search of buttered toast!  And when chased by mean neighbor, Eugenia, Mercy waits until Eugenia's good and close before she starts running.  After all, it's all about the chase, isn't it?  Mercy is simply delightful.  I'm sorry I waited so long to find her.

What else do I love about the book?

- that calling the fire department is the solution of choice when one's bed has collapsed (I'm rather partial to firefighters, having married one and all)
- that Mercy's parents adore her unconditionally

Note:
One thing I found particularly amusing is the choice of Eugenia as the name for the neighbor. When my children were little, the girls were very fond of Laura McGee Kvasnosky's Zelda and Ivy books. When their brother was old enough to read, they introduced him to the books, directing him to read the part of Eugene, the boy next door. Can any name other than Aloysius be more difficult to pronounce phonetically? My son promptly declared the name to be Ignoo, and could never be dissuaded from his chosen pronunciation. No telling what he might have made of Eugenia!
- February 29, 2012