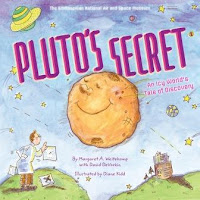 
Written by experts from the Smithsonian National Air and Space Museum, and humorously illustrated in watercolors, colored pencils and pen and ink by Diane Kidd, Pluto's Secret gives Pluto a chance to speak for itself about its discovery, its addition as the 9th planet in the solar system, and its eventual reclassification as an icy world in the Kuiper belt.

The astronomers soon learned that Pluto did not always stay in its place.  Sometimes it even switched places with Neptune, coming closer to the sun that Neptune did.

"Hey!" yelled the astronomers.  "Planets cannot do that!"

Remember, the icy world Pluto had a secret - a clue about what exists at the outer edges of the solar system and across the universe.

"You still have not figured me out!" sang Pluto.  "Keep trying!"


Balancing information and entertainment, kids will enjoy learning that Pluto was named by 11-year-old, Venetia Burney of England, and that its orbit is tilted, tipped "up like a slide in the playground." The text is similar to Comic Sans Serif and is presented on white background punctuated with occasional illustrated or colored text, and surrounded by anthropomorphic illustrations of the celestial bodies.

As one would expect from the Smithsonian, the book contains photographs of Pluto's discovery, discoverers and young Venetia Burns, a Who's Who of planets, Glossary, Notes, Suggested Reading, Bibliography and Index.

A final note that shouldn't need to be mentioned, but I will mention it anyway:
Pluto was deemed to be something other than a planet in 2006.  Whether you are a teacher, a librarian, a mother, or anyone who is connected with the education of young people, if you still have books that declare Pluto to be a planet, you need to throw those books away - now.

Today's collection of Nonfiction Monday posts may be found at Instantly Interruptible.
- May 13, 2013