The Boys Who Challenged Hitler - an audiobook review 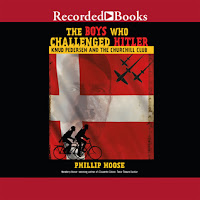 This is the heretofore little-known story of schoolboys who challenged the Nazi army even as their country's leaders collaborated with the Germans. Alternating first-person accounts of young saboteur, Knud Pedersen, with carefully researched narrative, Phillip Hoose tells the compelling story of these daring young boys who were willing to risk their lives to free Denmark from German occupation. Without their parents' knowledge, the boys raided, stole, and destroyed German property with nothing more than bicycles for transportation! Their heroic actions sparked the Danish resistance.

Michael Braun narrates the chapters containing Knud Pedersen's first-hand recollections of the events. While his delivery is weighty, it lacks personality. It is through the actions of Knud that the listener learns to like and admire him, rather than through his speech. Because the book is targeted at a young audience (ages 12-18) and Knud himself was only a teen at the time, a younger narrator may have been more appropriate. Author Phillip Hoose does an excellent job with the alternating chapters. He reads precisely and takes great care in the pronunciation of Danish names and places.

This is a well-researched, captivating story that proves the ability of individuals to effect change against overwhelming odds.