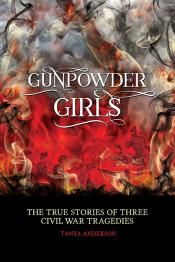 Gunpowder Girls is an historical account of three tragic events that took place during the Civil War—deadly explosions at arsenals in Lawrenceville, PA, Richmond, VA, and Washington, DC.   The majority of those killed in the explosions were poor young, hoop-skirted girls.  Many were Irish or German immigrants or young women and girls in dire financial circumstances due to the war.

Tanya Anderson combines first-person accounts, photographs, maps, explanatory asides, and realia, e.g., payroll records, Minié balls, and percussion caps, to bring little-known stories of the Civil War to life.  Anderson takes great care to explain not only what happened, but how it happened, to whom it happened, and the aftermath of the events.

In one instance, an accidental contributor to a deadly explosion provided an account of the incident prior to her death from injuries sustained. Her own account is used to set the scene,

At about 10:45 A.M., one of the supervisors, Mr. McCarthy, made his usual rounds, checking on the girls and reminding them about working quickly but safely.  He had a reputation for being almost overly concerned about safety.  As he stepped beside Mary Ryan, he pointedly told her to be careful.  Her work was particularly dangerous, and Mary had been warned before when she tried to bang loose some primers that were stuck on a varnish board.  Satisfied that he had reminded her, Mr. McCarthy left the room.
Mary continued working, picking the primers from the boards and stacking them into piles in front of her.

Mary's eventual failure to heed Mr. McCarthy's warning, however, isn't the whole story.  There was overcrowding, pressure to meet quotas, a desperate need to make money, paltry pay based on "piecework," and other factors.  Gunpowder Girls brings the complex stories of these young girls to light and life in a way that will resonate with young people.

Several two-page explanatory insets add context to the story, explaining among other things, the workings of rifles and the process of making cartridges.

Gunpowder Girls is another solid addition to Quindaro's new lineup of true stories written for today's YA readers.  They must be doing something right.  My daughter took my copy home with her to read on the plane.

In August, I reviewed Tillie Pierce: Teen Eyewitness to the Battle of Gettysburg, also by Tanya Anderson, from Quindaro Press.

My copy of Gunpowder Girls was provided by LibraryThing Early Reviewers Program.