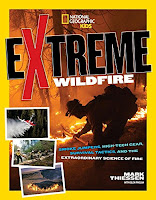 Today I am pleased to offer a brief interview with Mark Thiessen,
photographer and author of  Extreme Wildfire, published by National Geographic Kids, 2016.


Extreme Wildfire is a holistic view of wildfires—including scientific, historical, personal, tactical, and ecological aspects—and of course, there are the fantastic photos.


LT: Considering the danger and importance of fighting wildfires, I'm shocked that the training period for wildland firefighters is only five days!  Did you really feel prepared after only five days of training?


MT: You might call the five days of training “survival training”. It's basically everything you need to know so you won’t get yourself killed. Don’t try to outrun a fire going up hill, or always know where your escape route is and your safety zone. It’s 4 days of classroom instruction followed by practicing to deploy your fire shelter, and finally a practice fire. But certainly not enough to know how to fight a wildfire. That is learned on the job. Only a few rookies are added to a crew every year and they train with them leading up to fire season. It’s a great honor and they only accept the best of the best. The first task is fire training to get your “red card”.
The first time a rookie experiences the drudgery of digging line is when they work their first practice fire. To contain a wildfire you need to remove the vegetation along the fires perimeter down to mineral soil, a path about 2 ft wide. This is hard, back breaking work and even harder until you learn the technique. I will never forget a young, gung-ho rookie as we dug fire line on our practice fire. He was thoroughly exhausted after only 30 minutes of digging line. On the ride back to town he sat silent, he had that “50 ft. stare in a 10 ft. room” look about him. I knew what he was thinking, “What have it got myself into? How can I dig line all day, all summer long, when I can’t even do it for 30 minutes?”

LT: There are few people I know who would not want to be a National Geographic photographer.  On the other hand, knowing many firefighters, I can also understand that you've been "bit by the fire bug."  You've been very fortunate to combine two of your great interests.  If all things were equal financially, and you had to choose between photographer and firefighter, which would you choose?


MT: For many reasons, I would still like to do what I’m doing now, which is a photographer telling the story of fire. First you have the fire which moves like its alive and at times it's very beautiful. Next you have the firefighters who love the outdoors, love adventure and I want to show what it's like from the inside. Finally you have the issues of people moving into natural areas where fire has been the dominant player since the last ice age. It's not an matter of if wildfire is going to hit an area but when.  Not to mention firefighting is very hard work.

LT: You wrote of having flame retardant dropped on you from a plane. What special measures do you take to protect your equipment?


MT: It’s extremely dry and dusty out west during fire season. I’m afraid there isn’t much I can do to protect my equipment other than wipe it down at the end of the day and try to blow the dust off of it. The biggest problem is getting dust on my camera sensor when I change lenses. I can avoid this problem by having a camera body attached to each lens so I never have to change lenses. But no matter how hard I try, I still end up with dust inside my lenses.

LT: The goal of any writer, artist, or photographer is to evoke emotion.  What feeling do strive to create in your photos? Without a firefighter in the frame, how do you capture emotion?


MT: Fire is as beautiful as it is terrifying. And when you can anticipate the situation and get there when it’s going to happen, you just can’t take enough pictures of it. You end up in these other-wordly places. You’re in the middle of a forest with trees burning all around you – and it’s just magical. All of my favorite pictures all have this other-worldly feel to them. I hope to get into those situations where the light is doing things that it doesn’t normally do. I’m always drawn to photographing things where the light source is in the picture. So fire at night is a great opportunity for that.

LT: This final question was posed by my husband,  a veteran of as crusty a bunch of North Jersey firefighters as you're likely to meet! 😉When you are working as a photographer with a firefighting crew, do they accept you "into the fold?"  Do you share in the camaraderie?


MT: Because I have been doing this for so long, I’ve developed a good reputation among firefighters. Yet I’m always working with crews for the first time. They can be a little “standoff-ish” at first. But after my first day with them, I call it “getting to know me day”, they see how I carry my self around fire and I earn their respect. After a week we are good friends, exchanging emails and becoming friends on Facebook. I also follow through on my promise to send them photos of themselves fighting fire.

LT: My thanks to Mark Thiessen, his publicist, and publisher!

Note:
My copy of Extreme Wildfire was provided by the author's publicist
- October 10, 2016