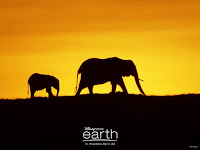 Earth
2009 DisneyNature Rated G
I must confess that I'm not usually a fan of Disney movies, but it would be impossible to find fault with the Earth Day release of DisneyNature's Earth. Narrated by James Earl Jones, Earth is a visually stunning celebration of our planet's most unspoiled places and their inhabitants. From the Arctic to the Antarctic, from the windswept African desert to the lush and exotic tropical rain forest, Earth follows the awe-inspiring migrations and life-cycles of elephants, cranes, humpback whales, buffalo, polar bears and more.
Family-friendly, Earth illustrates the cycle of life primarily through the hunt and chase, rather than the capture of prey (with the exception of the Great White shark, which by its nature, cannot be depicted with restraint). Only the night-vision scenes of confrontations between elephants and lions might frighten the youngest viewers. I was pleased at the number of families attending the early evening showing. There were as many children as adult in the audience, perhaps more.
Three suggestions if you're planning to see Earth (and I hope you are!)
1. See it at a theater with digital projection - the grainy quality of film detracts from the cinematography.
2. Choose a late evening showing unless you are prepared (or heartened) by choruses of "Look, Mommy! A lion!" "Look, Mommy! It's a giraffe!"
3. Stay for the credits. 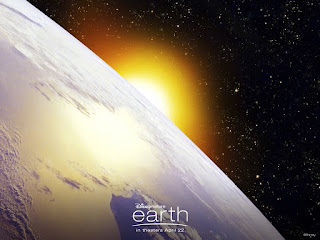