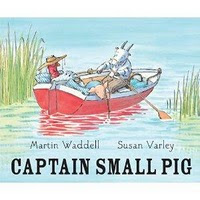 I've fallen behind in all the great new books that I'd like to review - so here's a quick take on a few of my new picture book favorites.

This book had me from page one.

One day Old Goat and Turkey took Small Pig down to Blue Lake. They found a little red boat. "I want to go for a row!" Small Pig said, dancing about. "Turkeys don't go in boats," Turkey said. "Neither do goats," said old Goat, but he climbed into the boat, and they rowed off onto Blue Lake.

of a lovely day out in a boat with good friends on Blue Lake...the day that he was Captain Small Pig.

And what could be better than that? The only lesson in this book is one for grownups - Let children try. It may aggravate you today, but it gives gives the lifelong gift of confidence and remembered joy.
A perfect pairing of cheerfully painted ink drawings and an enchanting story! Love it! 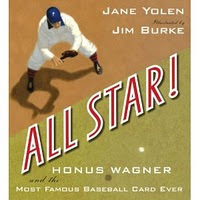 Yolen, Jane. 2010. All Star! Honus Wagner and the Most Famous Baseball Card Ever. Ill. by Jim Burke. New York: Philomel.

Stories from his childhood (he worked in a coal mine for 79 cents a day) and his early career (to try out for his first professional job, he hopped a freight train and then ran to the field without uniform, glove or spikes), offer a glimpse into both his personality and the time period.  A great baseball story for independent readers or as a read-aloud for school-age baseball fans.


I hold Daddy's hand because he is not used to being pink. "Don't worry, Daddy.  Being pink will be fun," I tell him.

Pink Me Up is pure pinkish fun.

According to the author's note, Joha is a recurring character throughout the Arabic-speaking world."  He is what is sometimes termed a wise or divine fool.  In this humorous retelling of a classic folktale, Joha finds a magical wishing stick.  The stick, however, does not do what he wishes - in fact, quite the opposite!  After wishing for new red slippers to replace his old sandals,

Can it get much worse?  Oh yes!  It can!  Delightfully told by Eric Kimmel and hilariously illustrated by Omar Rayyan.  Don't miss this one!
(Fuse #8 offers a detailed review.)
Share |
- June 04, 2010