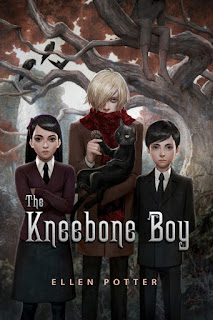 I like books that surprise me. I like books with intriguing cover art. I like quirky books. (The Death-Defying Pepper Roux, The Problem with the Puddles, to name two)

The Kneebone Boy is all three.


The Hardscrabble family is an odd one. The children Otto, Max and Lucia ("you pronounce it Lu-CHEE-a," the narrator reminds us), live with their father, Casper - an artist who makes his rather peculiar living, painting portraits of dethroned royalty. Their mother, Tess Hardscrabble, disappeared years ago under suspicious circumstances. Caspar was immediately suspected by the police; but the neighborhood children believe that Otto, the mute and eldest Hardscrabble child, murdered his mother with the scarf that he wears always around his neck. The outcast children are frequently left in the care of a neighbor with an unsightly neck boil, while their father travels the globe to immortalize down-on-their-luck princesses, sultans and baronesses.

But this trip is different. Their father has failed to make the proper arrangements and the children find themselves on an adventure - a frightening, exciting, exhilarating adventure!


All in all they were in that gorgeous state of mind in which they felt free and unafraid and sharply aware of how large and exciting the world was.
In other words, it hadn't gotten dark outside yet.

The Kneebone Boy is narrated in the third person by one of the three Hardscrabble children, with frequent asides and commentary on the nature of storytelling and writing. The narrator prefers to keep her identity a secret, insisting that the story belongs to all of them, but it soon becomes plain which of the children is narrating the story, as she gives away a clue in the title of the very first chapter,

In which we meet the Hardscrabbles, unearth a triceratops bone, and begin to like Lucia even more.

After some trouble in London, they arrive in Snoring-by-the-Sea and take up temporary residence at their Great-Aunt Haddie's castle folly. The quite young Great-Aunt Haddie (do the math, it's possible) is an adventure unto herself, and in her curious care (which involves dungeons and peanut butter and jelly), the siblings begin to imagine that they can find their mother, discover a secret passageway through the castle folly, and rescue a sultan. Perhaps they can, or perhaps they are on a completely different adventure - one about which neither they, nor the reader, knows anything!

Though told through the lens of Lucia's mind, The Kneebone Boy displays all facets of the Hardscrabble children's personalities. Max may be a know-it-all who isn't fond of animals, but he is also a companionable and loving brother. Lucia sometimes resents Max's bossiness and feels herself to be Otto's protector, but she knows when to defer to Max's superior intellect and wonders if she may need Otto as much as Otto needs her. And though fearful of many things, she is more than capable of overcoming her fears when the need arises. Otto, who is mute and communicates with his hands, also has more to him than his description and appearance might suggest. Though speechless, Otto knows and understands more than his siblings think.

Dark and quirky, Otto and the rest of the Hardscrabble family will draw the reader into this witty and mysterious adventure with a completely unexpected and thought-provoking conclusion.

A discussion guide for The Kneebone Boy from the publisher.

More reviews @
Kids Lit
A Chair, A Fireplace, and a Tea Cozy