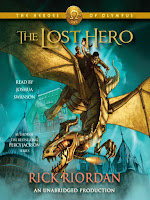 A co-worker mentioned that this audiobook has "a slightly campy feel."  That sums this one up perfectly.  Not that campy is a bad thing. (How else can you portray Aeolus, God of Wind, who is insane, living in a palace offering a one-man, 24/7 Olympian version of the Weather Channel?!)

The point is, readers and listeners will likely have different experiences with The Lost Hero.  Text offers much more room for interpretation than does audio.  The sheer number of characters - gods, goddesses, demi-gods, oracles, satyrs, wind spirits, centaurs, cyclopes, kings, wolves and more (!) make it an extremely difficult book for one reader, especially with a length of sixteen and a half hours.  That being said, however, Joshua Swanson does an admirable job, though the voice of Leo Valdez (a new arrival to Camp Half-Blood and a main character) did remind me a bit of Cheech Marin.

I'll skip a summary of the book, but here's a quick run-down:  Percy Jackson is missing, Annabeth is searching for him, three new demi-god campers (Jason, Piper and Leo) arrive at Camp Half Blood under peculiar circumstances and are sent immediately on a vague and dangerous quest, there is definitely more to come in future books. Chapters alternate between the perspectives of the three demi-gods.

I was sufficiently intrigued.  I'll probably see this one through 'til the end.

Listen to an excerpt here.
Another review @ Dog Ear