Stink and the Shark Sleepover - an audiobook review

I don't feature many early chapter books here, but I had the opportunity to review this one for the June, 2014, issue of School Library Journal.  An excerpt of my review is below. 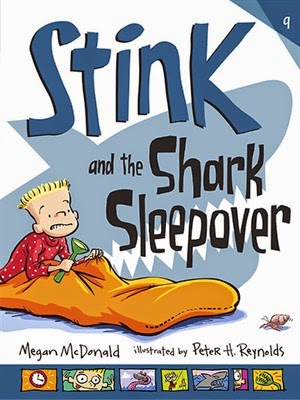 Stink's family and several of his friends have won a sleepover at the local aquarium. Everything is going swimmingly until the aquarium guide tells the story of "Bloody Mary," the undead vampire squid locked behind the door marked "Do Not Enter." Between worrying about Bloody Mary and the fact that his best friend Sophie's hermit crab is missing, Stink may never fall asleep!

###
Interspersed throughout are facts on sharks and other aquatic creatures, and a brief history of the "Bloody Mary" ghost story featured in the book.

The first few books in the Stink series were narrated by Nancy Cartwright (the voice of Bart Simpson).  Barbara Rosenblat is the current narrator.
Listen to an excerpt here.
Read a sample here.

There are now seventeen books in the Stink series, and he even has his own website, Stink Moody. Both are testament to the popularity of the fictional Judy Moody's little brother.