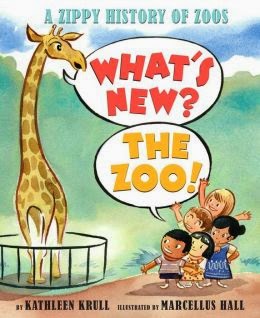 What's New? The Zoo? is an illustrated overview of zoos that combines history with hard science and social science.  Kathleen Krull outlines the history of zoos, and offers insight into what compels us to keep animals, what we've learned from them, and what has changed in zoos since the founding of the first known zoo,

4,400 Years Ago, The Sumerian City of Ur, in Present-Day Iraq
The king of beasts lunges and roars.  The King of Ur roars right back, feeling like the ruler of all nature.  How delicious to wield his power over dangerous animals!  It's the world's first known zoo, and all we're sure about (from clay tablets in libraries) is that is has lions.

From this beginning, Krull highlights transitional moments in zoos throughout the ages and across the globe.  Just a few examples include:

(Did you know that Aristotle wrote the first encyclopedia of animals?)

On most pages, humorous, watercolor illustrations nestle around paragraphs of simple font against white space.  Several pages, however (including one depiction of fifteen buffalo waiting for a train at Grand Central Station, 1907), are double-spreads with many amusing details.

The very talented Kathleen Krull never disappoints!  If you like your science accessible and entertaining, this is the book for you.